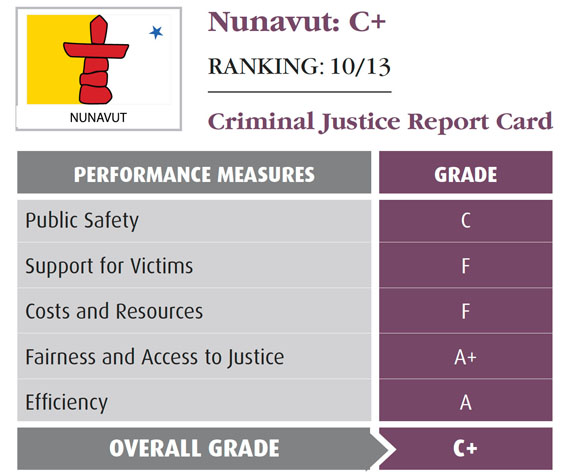 Nunavut’s justice system deserves some of the highest marks in Canada for efficiency, fairness and access to justice, but failing marks for victims’ services and costs, an Ottawa-based think-tank found in a national report card released Sept. 21.

The report card, done for the Macdonald-Laurier Institute by law professor Benjamin Perrin and statistics expert Richard Audas, hands out grades ranging from F to A+ for each of Canada’s 13 territorial and provincial justice systems.

They graded each jurisdiction on five criteria: public safety, support for victims, costs and resources, fairness and access to justice, and efficiency.

After that, each of the five grades is compiled to produce an overall mark.

They gave Nunavut an A+ for fairness and access to justice, and an A for efficiency.

Nunavut’s A+ mark for “fairness and access to justice” is better than the marks they handed out to all other jurisdictions in that category.

This likely means that Nunavut does exceptionally well in ensuring that the constitutional rights of accused persons are protected and that they get fair and impartial trials.

On “efficiency,” Nunavut’s mark of A suggests that police are able to solve most crimes and that criminal cases proceed through the courts in a timely manner.

And the Nunavut courts are better than most others in Canada at processing cases in a speedy manner.

“In terms of the efficiency of its criminal justice system, the average criminal case length in Nunavut is lower than average at 107 days, and police officers in Nunavut had a higher than average number of Criminal Code incidents per officer,” the report card said.

That is consistent with the 2015 annual report of the Nunavut Court of Justice, which found that, except for the Northwest Territories and Prince Edward Island, the Nunavut courts move faster than any other jurisdiction in Canada.

But Nunavut gets a C for public safety and failing grade of F for victims support, the report card found, because of the tiny number of victims who benefit from restitution orders.

It also gets a grade of F for “cost and resources,” driven partly by isolation and geography, and by the territory’s astronomical crime rates.

“Nunavut has staggeringly high violent crime rates—by far the highest in Canada. Its property crime rate is the second highest in the country, behind only the Northwest Territories,” the report found.

That’s in spite of a finding that in Nunavut, there are more police officers per capita than in any other jurisdiction.

And the costs produced by multiple factors means the cost of public safety, per person, is the highest in Canada.

“No doubt at least in part due to its significant crime rates, geography, isolation, and vastness, the cost of public safety per person in Nunavut, the cost of corrections per capita, and the average daily inmate cost vastly outstrip those of every other jurisdiction in Canada,” the report card said.

Overall, Nunavut’s justice system got an overall grade of C+.

That puts Nunavut ahead of Northwest Territories and Yukon, each of which received a C, as well as lower marks for fairness and access.

And the worst justice systems are those in Yukon and Manitoba.

“Public perception of the police in Manitoba is among the lowest in Canada, with dismal ratings for enforcing the law, ensuring safety, satisfaction with safety, supplying information, being approachable, being fair, and responding promptly,” the report said.

Like Nunavut, Alberta, British Columbia, Ontario and Saskatchewan also got overall grades of C+, but the report’s authors are especially critical of Ontario, which they say should be doing much better.

“There are serious issues with efficiency in Ontario’s justice system. It has the worst record in Canada for the proportion of charges stayed or withdrawn (43.1 per cent on average), compared with a mere 8.6 per cent in neighbouring Quebec,” the report card said.

The authors said they produced the report to draw attention to serious problems of inefficiency and under-performance in justice systems across Canada.

“Canada is suffering from a ‘justice deficit’ – a large and growing gap between the aspirations of the justice system and its actual performance. With few exceptions, our justice system is slow, inefficient, and costly,” the authors said.

They also said governments gather little to no data on recidivism rates, which means the performance of correctional programs is often impossible to measure. 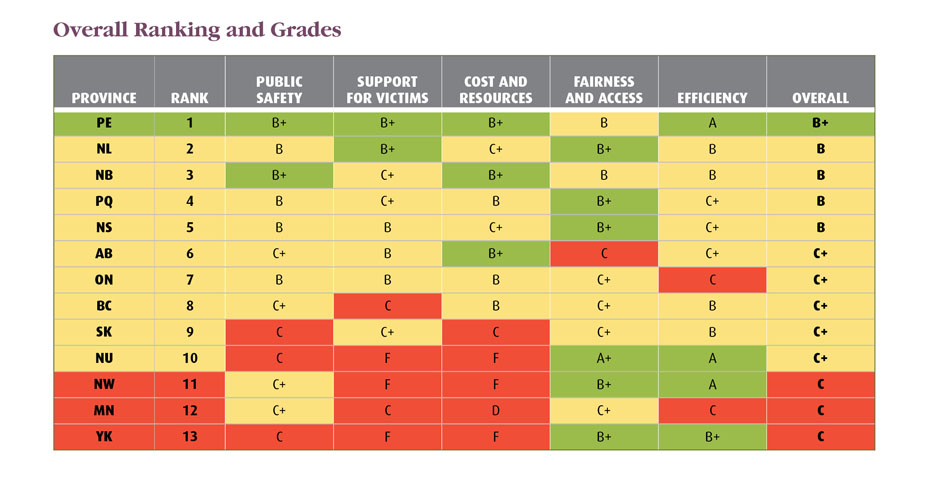 In a national report card on Canada’s justice systems released by the Macdonald-Laurier Institute, Nunavut received and overall grade of C+ and ended up tenth overall, doing better than the NWT, Yukon and Manitoba.