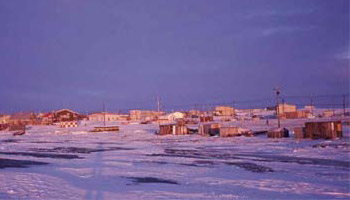 NIRB hearings into the proposed Kiggavik mine are hosting community roundtables until March 14. (FILE PHOTO)

Nunavummiut Makitagunarningit, the Baker Lake-based anti-uranium group made a final plea before a public hearing of the Nunavut Impact Review Board March 7 aimed at a rejection of the proposed Kiggavik uranium mine.

The group addressed the review board at its final hearing this month in Baker Lake on the proposed mine, repeating its oft-stated position that the mine would be a lose-lose proposition for the Inuit of Kivalliq.

Nunavummiut Makitagunarningit, or Makita for short, is a registered intervenor at the hearing. The group has already made clear its position, publicly and in response to a final environmental impact statement prepared by the project’s proponent, Areva Resources Canada.

Under Areva’s proposal, the project would span two properties about 80 kilometres west of Baker Lake, encompassing five pits, a mill, a 20-km road and an airstrip to transport yellowcake by air to Saskatchewan for processing.

“While I am, generally speaking, a pro-development kind of person, I am very much opposed to the proposed Kiggavik uranium mine,” Baker Lake resident and Makita spokesperson Hilu Tagoona said March 7 at the hearing.

Makita’s concerns have always been rooted in the well-being of local caribou herds and their calving grounds.

“Makita believes that the Kiggavik proposal and its basin-opening potential poses a serious threat to the long-term viability of the Kivalliq region’s caribou herds and potentially their harvesting by Baker Lake Inuit,” Tagoona said.

The building of a small mill at Kiggavik could lower the costs for other companies to exploit uranium at other nearby deposits, Makita says, which the group believes could have serious consequences for local caribou habitat.

Tagoona said the group also stands behind a motion filed last week by the Baker Lake hunters and trappers organization, which asks that the hearing be suspended because Areva is hedging on a project start date while it waits for the value of uranium to rise.

The NIRB did not pass the motion, but Tagoona told the hearings that if Kiggavik is approved, and prices rise enough to make the project viable, it opens the entire region to uranium development.

In the meantime, Makita urged the NIRB to “seriously consider the implications of the possibility that Areva might sell its rights to the Kiggavik deposit to another company.”

In its presentation, Makita also called into question the Government of Nunavut’s own uranium policy, which generally supports the uranium development, with conditions, such as “the support of Nunavummiut, with particular emphasis on communities close to uranium development.”

“In the case of the Kiggavik proposal these are the communities of Baker Lake and Chesterfield Inlet,” Tagoona told the hearings.

She said the GN put itself in a precarious situation by saying in its March 6 presentation that the policy is not like a checklist and “they are not items to be ticked off,” Tagoona said, quoting Steve Pinksen, the assistant deputy minister of the GN’s environment department.

“After that statement, it is not clear to us what meaning the GN’s uranium policy has,” Tagoona said.

The hearings’ technical sessions have now wrapped up. Community roundtable sessions began March 9 and will run until March 14.

Nunavut Tunngavik Inc. and the Kivalliq Inuit Association are next up to give presentations, March 10.

The group’s technical review of the proposed project has already noted the need for better Inuit Qaujimajatuqangit to be integrated into the scope of the project.

The hearings will also hear March 10 from the GN, Aboriginal Affairs and Northern Development Canada and the Athabasca Dene, who oppose Areva’s plans to fly some 5,000 tonnes of yellowcake each year to Points North, Sask., where it would then be transported by truck or train.