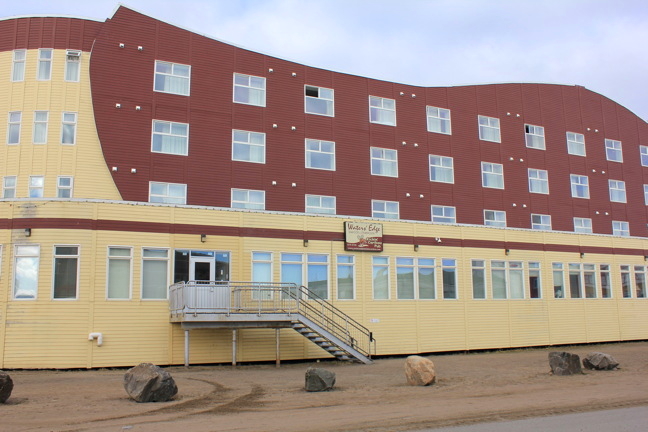 Owners of the Waters’ Edge are in court to try to prove they have a lease for the premises until 2023 but the building’s owners, Northview, say their lease is up in August and they are selling the building. (FILE PHOTO)

The future owner of Iqaluit’s Hotel Arctic remains a mystery even after a day of testimony addressing those rumours during a civil hearing on the lease term for the Waters’ Edge Steak and Seafood restaurant, which operates out of the building.

“If I was to suggest to you that [the buyer] was [Nunavut] Arctic College, would you deny it?” asked James Morton, who is representing sisters Kim and Donna Waters, who own the Waters’ Edge restaurant and Kickin’ Caribou pub.

“Again I think I’ve already answered that question,” Freda responded, telling the court she had signed a non-disclosure agreement with the hotel’s buyer.

The hotel is set to be handed over to the buyer on July 28, but Freda told the court the future owner, “will not be using it as a hotel,” and the building will undergo “substantial renovations.”

Sheila MacPherson, a lawyer representing Northview, told Nunavut Justice Paul Bychok that the identity of the buyer was immaterial to the matter before the court.

“This is a transaction that is not yet closed and indeed, quite frankly, may be in peril as a consequence of these proceedings,” MacPherson said.

But that didn’t stop lawyers and others in the courtroom from suggesting possible buyers as part of a larger argument by the Waters sisters that Northview was intentionally keeping the restaurant in the dark over the sale.

That may be because of an “increasingly frustrated” relationship between the two businesses following a ruling in 2015 that kept the restaurant on the premises after Northview tried to terminate the lease over alleged safety and conduct breaches.

“We felt the tenants hadn’t met their obligations,” Freda said of Northview’s position on the restaurant lease at the time. Northview gave the Waters a letter of lease termination in 2014 but the restaurant owners challenged and ultimately overturned that in court.

Freda admitted to the court to that she was asked by the Waters to clarity the rumours during a phone conversation in February, and that the owners were “extremely concerned” over the fate of the hotel.

“I do recall saying to Kim that I had not heard the rumour and that it’s false, as far as I know, about the sale of the hotel to the college or any other business like that,” Freda said on the stand.

The civil hearing, which began June 26 and is scheduled to continue June 27 and possibly longer, is expected to include testimony from individuals with knowledge of the timeline of the hotel’s sale, and lease negotiations between Northview and the Waters’ Edge restaurant.

“If at some point you’re going to be arguing that [Northview] has been acting in bad faith, and there’s been some allusion to that over the course of the day, it does seem to me that timings of various things that have been said or done could be material,” Bychok told lawyers, June 26.

The hearing was given special precedence in the Nunavut Court of Justice schedule due to the immediate sale of the building, which will require a ruling before the courts take a summer hiatus in July.