Here’s a peek into one of the four rooms in an apartment in the new Nunavut Arctic College residence in Cambridge Bay. (PHOTO BY JANE GEORGE) 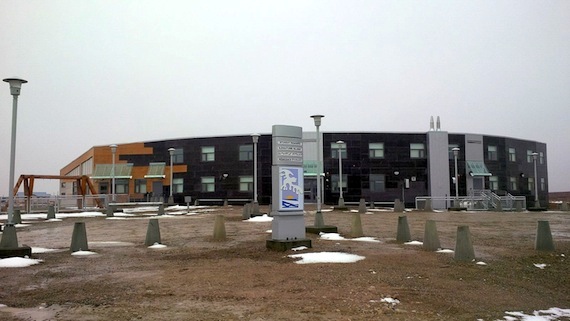 The new Nunavut Arctic College residence in Cambridge Bay includes a child care centre to the left of the building and shared apartments for up to 20 students in the other section. (PHOTO BY JANE GEORGE)

That’s because the spiffy new $10-million residence, nothing like some the dirty and unkept student residences at the Arctic College Nunatta Campus in Iqaluit, looks like it could have been featured on an HGTV network show.

The residence, which received its first students in August, includes five four-bedroom apartments, each with its own kitchen and living room and two bathrooms, along with access to a common sitting area downstairs. Students pay $150 and up per month to stay there.

There are a few rules: you can’t drink, smoke or use drugs in the building, but you can have visitors stop by—and overnight there’s a security guard to keep a eye on things, along with a state-of-the-art alarm and sprinkler system.

Although the residence is designed for single students, a child care centre, which will give priority to college students with children, occupies one end of the building.

The child care centre is not in operation yet although the cribs and child-sized furniture are already in place.

But, like the residence, the child care centre also features lots of natural light at this time of year—through big windows and skylights above.

Designed by Yellowknife’s Taylor Architecture Group, formerly Pin/Taylor Architects, the building that houses the centre and residence has a crescent shape, to deflect the winds coming off the land.

And its curved lines look as good from the outside as from the inside.

Located on what is, for now, the outskirts of growing Cambridge Bay, the building is part a larger Arctic College capital project which is expected to include construction of a mine training centre for which the Government of Nunavut has already earmarked $38.4 million, to be spent between 2016 and 2021.

But the training centre’s focus could expand to include other fields than mining: NAC Kitikmeot campus director Fiona Buchan-Corey said she’d like to see a centre whose programs could support activities at the Canadian High Arctic Research Station as well.

“Ideally, I would hope that we have instructional space that will meet a multitude of program needs as they do change over time,” Buchan-Corey said.

When members of the CHARS development team visited Cambridge Bay in 2012, they had also suggested the new college residence could double as a short-term residence for visiting researchers at the station, due to open in 2017.

But that didn’t work out.

For now, the residence is home to only a handful of students—from Iqaluit, Clyde River, Gjoa Haven and Kugluktuk—and an instructor, Buchan-Corey said.

That’s because the college didn’t get funding for its popular cooking program this year—and the majority of students have families.