“I think it’s in our genes” 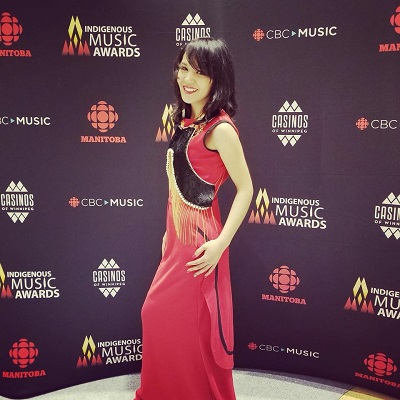 Nunavut singer Kelly Fraser models Kyak’s sealskin sakiaguti as an embellisment over her dress at the recent Indigenous Music Awards in Winnipeg. The dress was made by Melissa Attagutsiak. (PHOTO COURTESY OF K. FRASER) 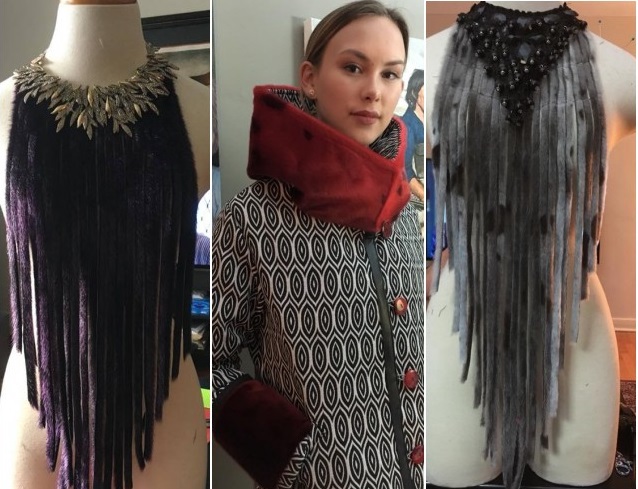 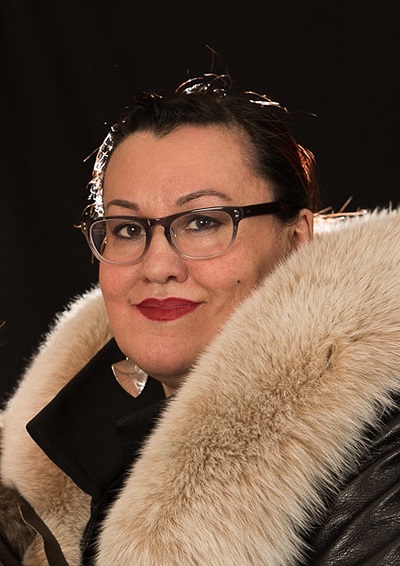 TORONTO—Inuit designers have proven there is no limit to the ways you can use sealskin.

One of the latest fads in northern fashion: Martha Kyak’s fringe necklaces. The Pond Inlet-born and Ottawa-based designer’s feminine fringes are popping up on Inuit women at events north and south, featuring a delicate array of sealskin strips tied together with hint of bling.

“It happened by accident,” Kyak laughed, during an interview during Indigenous Fashion Week in Toronto.

Kyak had made a sealskin dress with a fringe around its neck last year, which was being modeled during a photo shoot at Nunavut Sivuniksavut, where she works as an instructor of Inuit history and Inuktitut.

The dress split up the back as it was being modeled. Instead of fixing it, Kyak cut the fringe off the front of the dress and decided to attach it to a necklace—which quickly drew compliments.

“It kind of took off from there,” she said.

Kyak has since come up with her own name for them: “fur sreal,” a play on a few different phrases, including surreal.

And she brought a bunch of the fringe necklaces with her to exhibit at Indigenous Fashion Week, one of Canada’s foremost events for Indigenous designers, held this past weekend in Toronto.

For their delicate look, there is something much fiercer behind the design, Kyak noted, however accidental their creation was.

“I was making one of those fringes on a mannequin a few days ago,” she said.

“I thought, these are like warrior necklaces. This is our right as Inuit to wear these. We’ve been disrespected and muzzled for so long, so this is a very quiet way to make a statement and say: this is us, as Inuit.”

“I think it’s in our genes”

Kyak was raised the youngest of 11 children in Pond Inlet. Like many Inuit girls, she grew up watching her mother and grandmother sew.

Kyak’s grandmother became blind as an adult but continued to sew, using her hands to measure fabric.

“I would always ask her if she wanted help and she always refused,” Kyak said. “The only thing she needed help with was threading the needle.”

Her grandmother’s skill brought her to one conclusion: “I think [sewing] is in our genes.”

When Kyak had children of her own, she started sewing more often out of necessity, but she also credits that time in her life as a period when she developed her creativity as a seamstress, when she started adding intricate designs and embellishments to her work.

She eventually opened her own shop in Pond Inlet, called Kisutaatvik, where she sold clothing and jewellery for more than a decade.

After a divorce, Kyak moved her daughter and son to Ottawa in 2010.

“To make ends meet, I started painting and sewing,” she said. “I started selling those items on Facebook and it just evolved from there.”

Today, Kyak still sells most of her work through Facebook, but she also now sells it through her own Inuk Chic page. More recently, Kyak has started selling her in-demand printed fabrics through Amazon.

Kyak is one of six Inuit designers and artists who exhibited their work at this year’s Indigenous Fashion Week, a three-day event that features the country’s top Indigenous-made fashion, textiles and crafts through workshops, exhibits and runway shows.

“It’s an Indigenous event, and it’s good to connect and help each other—you need that,” Kyak said.

“Sometimes you feel so alone in this business. As a designer, it’s important that we help one another.”