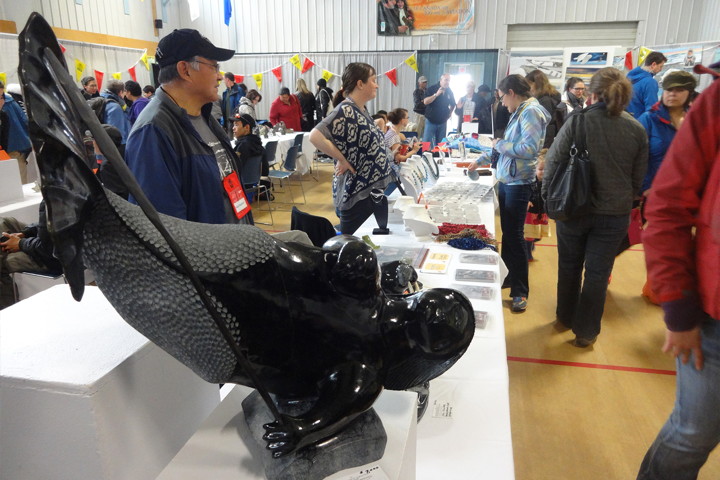 A sculpture of Sedna by Jaco Ishulutaq, with carver Silas Kipanek in the background. (PHOTO COURTESY OF NACA) 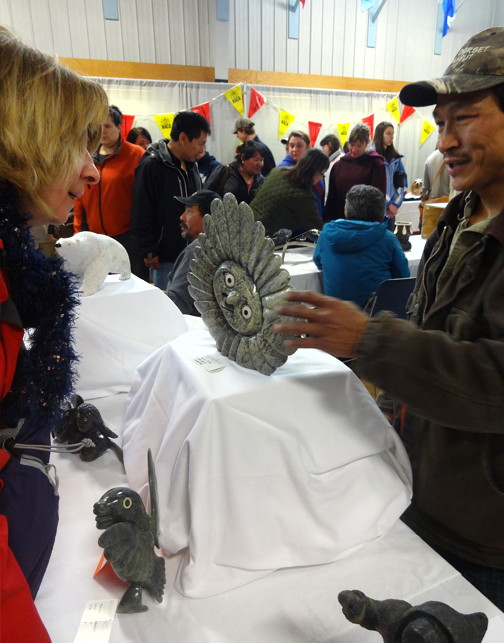 Cape Dorset sculptor Toonoo Sharkey displays his artwork at the 2013 Nunavut Arts Festival in Iqaluit. This year the Aug. 20 to 26 festival is moving to Cambridge Bay. (PHOTO COURTESY OF NACA)

The Nunavut Arts and Crafts Association plans to showcase its talent in Cambridge Bay this year.

The Kitikmeot community of 1,500 people will host the 15th anniversary of the Nunavut Arts Festival between Aug. 20 and Aug. 26 — the first time it’s been held in Cambridge Bay since 2001.

The idea of changing the venue this year came when NACA’s executive director Rowena House visited Cambridge Bay a couple months ago.

“I was there for the Kitikmeot Trade Show in February and there was a lack of artists at the event,” House said.

“We kept hearing that there’s not enough activities for the artists in that region,” she said.

House said Iqaluit has hosted the festival for six or seven years now — but this year, the timing works out perfectly.

There’s an Arctic Council meeting scheduled in Cambridge Bay at the same time in August, and that’s a popular time for cruise ship traffic as well.

That means the festival will likely continue its pattern of yearly growth in attendance and artist participation.

It’s also an ideal time to promote the uprising of a new generation of artists in Nunavut, House said.

The festival helps artists learn from each other how best to price and sell their work, and it allows them crucial networking time too.

Which is apt since this year’s theme is “future generations.”

“A lot of our artists have nieces and nephews and friends of the family and even sons and daughters that they work with and pass down those traditions,” House said.

“We just wanted to highlight those and really focus on working together and the educational process between the generations.”

There’s also a bit of a turnover in Nunavut’s creative class at the moment — young artists are slowly replacing older ones. House said it’s important that the new up-and-comers have the same opportunities their elders had in the past.

“[Cape Dorset] has lost a lot of great artists in the last few years. So we need to make sure we’re fostering the development of new artists across the territory,” House said.

A portion of the festival will be devoted to mentoring. That’s when one artist spends the week with an established artist, so the rookie can walk away with a better understanding of how the industry works.

The festival will also include scheduled seminars, demonstrations and workshops such as the business of the Inuit art.

Representatives from international galleries will be attending as well — House said staff from two galleries from Vancouver and one from each in France and Switzerland will be travelling to Cambridge Bay.

And two wholesalers from Toronto will also come up and talk shop with the galleries and the artists, telling them what’s selling, what’s not, and any concerns within the industry at the moment.

House said there’s still an art sale scheduled in Iqaluit July 9 — Nunavut Day — and that the festival will return to the capital in 2015.

Applications for artist participation are due May 6. If you’re an artist and would like to apply to take part, click here.