Nunavut board gets back to work on Mary River 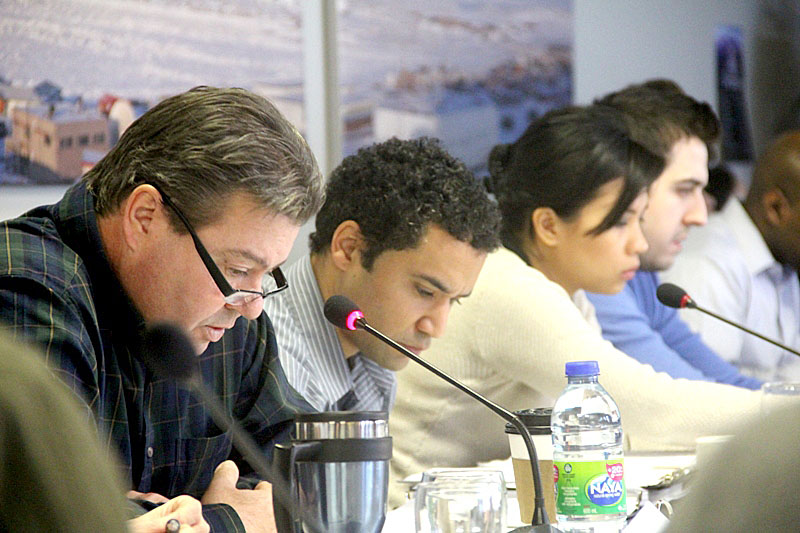 Representatives from Aboriginal Affairs and Northern Development and the Government of Nunavut at the Nunavut Impact Review Board’s project certificate workshop for the Mary River iron project Dec. 18 in Iqaluit at the Frobisher Inn’s Koojesse Room. The workshop is part of a two-day meeting that will run until Dec. 19. (PHOTO BY SAMANTHA DAWSON)

Federal and territorial agencies and representatives from Baffinland are to go over 182 terms and conditions outlined in NIRB’s final hearing report — issued this past September — after northern development minister John Duncan approved the project Dec. 3.

The parties involved must figure out how the recommendations will be implemented within respective licenses, certificates and permits, and who will perform which tasks.

At the workshop, the Qikiqtani Inuit Association and the Government of Nunavut emphasized the importance of environmental monitoring programs and working groups to observe the iron ore project.

The QIA’s Joel Fortier, who led a site inspection for QIA at the Milne Inlet Camp, the Milne Tote Road and the Mary River camp at Baffinland’s expense this past August, said that monitoring programs should be implemented as soon as possible, including the monitoring of the proposed shipping route from Steensby Inlet.

When it came to ballast water, “what happens if the risk analysis is not acceptable?” Fortier asked.

Representatives from bodies like the Canadian Transportation Agency, AANDC, Environment Canada, Fisheries and Oceans Canada, Natural Resources Canada, Transport Canada and the Government of Nunavut were in attendance.

Harvey Nikkel, a representative of Transport Canada pointed out that there are certain requirements for ballast water discharge that are determined prior to discharge from the ship.

“And those are requirements that need to be met, there are certain standards,” he said.

“If [the working group] viewed it as not having adequacy of treatment they would bring it to Transport Canada’s attention,” he added.

Oliver Curran, Baffinland’s director of sustainable development, said the corporation agrees there are standards to meet when developing these programs.

“As everybody knows, the final environmental impacts assessment did assess ecological components such as sea ice and polar bears,” Curran said.

But when talking about ballast water and the marine environment, it is important to keep in mind that the term “marine mammals” includes polar bears, NIRB’s executive director Ryan Barry said in response to a question.

Peter Hale, the Government of Nunavut’s manager of wildlife research, said discussion on polar bears should also include a look at habitat such as sea ice and what polar bears feed on, which is mostly ring seals.

“Our assumption is that this marine working group will address very, very important issues and our department will play an important role in that particular forum to help [deal with] those particular issues,” Hale said.

The working group should also make sure any other necessary data is collected, said James Hodson, the environmental assessment coordinator for Environment Canada.

“We expect it [the working group] will provide oversight to ensure additional baseline data is collected, and effective monitoring is implemented to ensure marine impacts to the marine environment are detected and minimized,” he said.

Derrick Moggy, with the Department of Fisheries and Oceans, said the DFO could provide technical advice to support the development of a monitoring program.

QIA also wanted to know about adequate trained personnel on board every vessel who would be capable of dealing with any fuel spills.

“We would agree that adequate training is very important,” Fortier said, pointing out that all of Hudson Strait is a “high flow area” for marine mammals and sea birds.

Robert Eno, the chief environmental protection officer for the Department of Environment in the Government of Nunavut, said a spill contingency plan that has been prepared in accordance with Nunavut’s spill regulations would be in place.

“For clarity, [those regulations] require anyone storing contaminants in excess of a prescribed amount to file a spill contingency plan,” he said.

But upon review, the chief environmental protection officer may need Baffinland to make changes to the plan, if the officer is uncertain about their ability to respond to a spill effectively, and if they have any other outstanding questions or issues.

At the Mary River final hearings this past July, the GN specifically expressed concerns about the over-wintering of fuel in a ship or barge for land-based activities.

“It should be noted that with or without a project certificate, we believe that Nunavut’s Environmental Protection Act, and the contingency planning and reporting regulations are applicable to certain elements of Baffinland’s project,” Eno said.

The Government of Nunavut isn’t being unreasonable in that regard, he said.

“We don’t believe our legislation is terribly onerous, we’re not going to ask for anything outrageous or unreasonable.”

Barry said the NIRB hopes to issue the project certificate within 30 days of the minister’s decision.