Nunavut board says yes to Mary River, with conditions 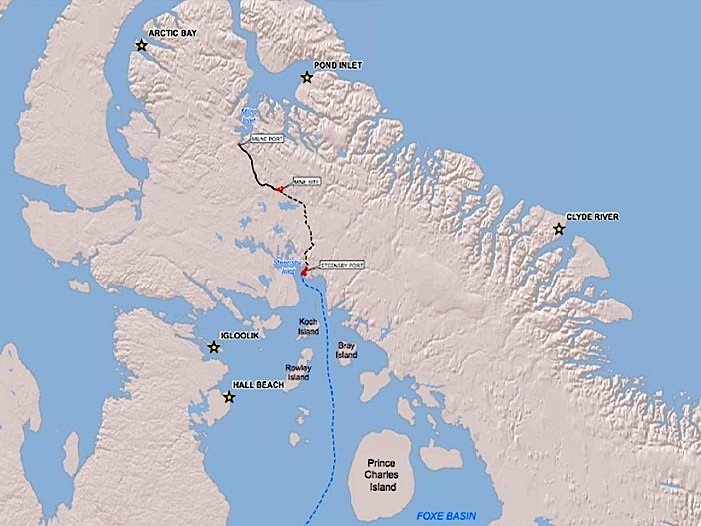 The Mary River iron project, proposed by the Baffinland Iron Mines Corp., a subsidiary of Arcelor Mittal, would involve a railway, a port at Steensby Inlet and numerous transits each year made by huge ore-carrying vessels from Steensby Port to ports in western Europe.

The Nunavut Impact Review Board said yes to the massive Mary River iron mine project, subject to 184 terms and conditions set out in a 356-page final hearing report made public at around 7:45 p.m. eastern time Sept. 14.

That report, with its recommendations, will now go to the minister of Aboriginal Affairs and Northern Development Canada, John Duncan, for approval.

In the NIRB hearing report’s executive summary, the acting chair of the board, Elizabeth Copland, said that in the face of the massive Mary River project, “many Nunavummiut feel caught between two worlds…”

She described that as a conflict between hopes for lasting economic benefits, and fears for the mine’s effects on air, land, water, fish, wildlife, marine mammals, traditional areas, traditional ways and communities.

The Mary River project’s proponent is Baffinland Iron Mines Corp., a subsidiary of the global steel giant Arcelor Mittal. Baffinland proposes the extraction of 21 million tonnes of iron ore a year over 21 years from the Mary River site.

The multi-billion-dollar project would see huge quantities of iron shipped to a port at Steensby Inlet along the first railway ever built north of the treeline in the Canadian Arctic.

From Steensby Inlet, massive 320-metre icebreaking ore vessels would move 12 months of the year through Foxe Basin and Hudson Strait to ports in Europe. Baffinland hopes to begin construction some time in 2013.

In a news release, the board said its key recommendations for the Mary River iron mine project include:

• the establishment of working groups to help monitor the marine environment, the terrestrial environment, and the creation of new duties for the existing Qikiqtaaluk Socio-Economic Monitoring Committee;

• ensuring communities affected by the project are consulted continuously through the life of the project on the best ways of preventing or limiting negative effects from the mine;

• a requirement that access to project information be centralized, including monitoring and regulatory information; and,

The board said there is still much uncertainty over the adverse affects that the Mary River project could inflict on the environment, but they said they applied the cautionary principle whenever possible.

The NIRB also acknowledged submissions from numerous proponents who said they are worried about the capacity of government to enforce environmental regulations.

“Through the course of the hearing thus far, parties have raised concerns rather consistently about the extent to which this project, should it proceed, might result in challenges to regulatory capacities,” the board said.

The Government of Nunavut issued a statement Sept. 14 shortly after the NIRB’s news release.

“The GN will be diligent in completing a review of the recommendations made by NIRB to the Government of Canada and will be able to comment in more detail once that is complete,” Premier Eva Aariak said. “We look forward to a timely decision from the Federal Minister of Aboriginal Affairs and Northern Development Canada.”

As for Baffinland, Greg Missal, the company’s vice-president of corporate affairs, told Nunatsiaq News late Sept. 14 that the company is pleased with the NIRB’s decision.

But he said Baffinland looks at the NIRB recommendations as “a step in the process,” because even if the project gets a go-ahead from the federal minister, the company will, among other things, seek water licenses for the project.

“We still have lots of work to do,” said Missal, adding that it will take several days for Baffinland to fully evaluate the many conditions set out by the NIRB.

Readers who use an FTP client may find the final hearing report at:

That URL can also be opened with a web browser.

with files from Jim Bell and Jane George