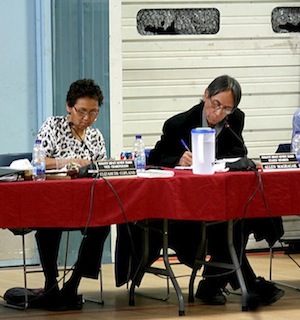 Elizabeth Copland, the chair of the Nunavut Impact Review Board, listens last July to evidence given by witnesses at public hearings in the Iqaluit cadet hall on the Mary River iron project. But “with the level of development that we are currently experiencing in Nunavut, the Nunavut Impact Review Board’s core capacity is already stretched to the breaking point,” Copland told MPs Jan. 29. (FILE PHOTO)

A Conservative bill aimed at implementing part of the Nunavut land claims agreement can’t work unless the Nunavut Impact Review Board and the Nunavut Planning Commission get more funding, board officials told a House of Commons committee in Ottawa recently.

“First, with the level of development that we are currently experiencing in Nunavut, the Nunavut Impact Review Board’s core capacity is already stretched to the breaking point,” the NIRB’s chair Elizabeth Copland told MPs Jan. 29.

The bill, which the Tories are marketing politically as the “Nunavut Jobs and Growth Act,” is mostly aimed at setting out detailed rules and procedures for the review board and the planning commission.

Most of it is taken from an earlier bill called the Nunavut Planning and Project Assessment Act, which died on the order paper just before the May 2011 election.

The aboriginal affairs committee finished looking at the Bill C-47 Feb. 12, when the Tory majority voted down a number of NDP and Liberal amendments.

But before that, witnesses from the NIRB and NPC said their organizations don’t get enough money from Ottawa each year to pay for the bill’s new requirements.

Copland, speaking on behalf of the NIRB, said that’s because the bill contains provisions that her board can’t afford.

• extensive new requirements to meet access to information obligations beyond those set out in the Privacy Act;

• obligations to translate lengthy and highly technical documents into three languages, for which corresponding terms in Inuktitut might not be available, and which only a tiny handful of translators are qualified to carry out; and,

Another funding gap, Copland said, is the absence of a designated fund to help intervenors from the public make submissions during environmental assessments.

This, she said, creates “a disparity in public access to impact assessment in Nunavut.”

But in jurisdictions covered by the Canadian Environmental Assessment Agency, such funding is available to members of the public, Copland said.

For example, the CEAA made $81,600 available to support public participation on a federal environmental assessment of iron ore project in Quebec called Fire Lake North.

The Canadian Environmental Assessment Agency, unless the federal minister declares otherwise in certain rare exceptions, has no jurisdiction in Nunavut anymore.

That’s because the federal government — with the support of Nunavut Tunngavik Inc. — quietly amended Article 12 of the land claims agreement to eliminate the CEAA from Nunavut.

Ryan Barry, the NIRB’s executive director, said after since the CEAA was removed from the territory in 2008, funding for ordinary people has been on an ad hoc basis.

“In some cases it’s been granted. More recently the response from the minister has been that because there is no established program, there will be no funding,” Barry said.

As for the NIRB’s current financial situation and its ability to carry out the new functions set out in Bill C-47, Barry said “now you know what keeps us awake at night.”

“The bill in front of you will require us to have an online presence. It brings in new translation requirements. It makes us have to adhere to the Access to Information Act and the Privacy Act.

“For a small organization such as ours that doesn’t have those systems in place for all aspects, as the federal government might, that means we are expecting a much larger burden on an already very constrained budget,” Barry said.

But he also said the review board is preparing a detailed funding submission for the federal government and that the board is encouraged by comments made this past December by John Duncan, the Aborginal Affairs and Northern Development minister, on the NIRB’s funding issues.

As for the Nunavut Planning Commission, Sharon Ehaloak, told the Commons committee Feb. 5 that the NPC is so “critically underfunded,” some jobs go unfilled.

“In our organizational capacity, currently we have left positions vacant simply to meet our current needs. We will not be able to enact this legislation without additional funding. There’s just no question about it,” Ehaloak said.

Ehaloak even said the NPC risks being “sued by proponents” because it doesn’t have the money to meet its obligations.

“From the time of our original submission, I’m sure there have been cost escalators, and we will not be able to fulfill our obligations under the legislation, given the requirements,” Ehaloak said.

On the new translation requirements, Ehaloak said every English word the NPC produces costs them $2 in extra translation costs.