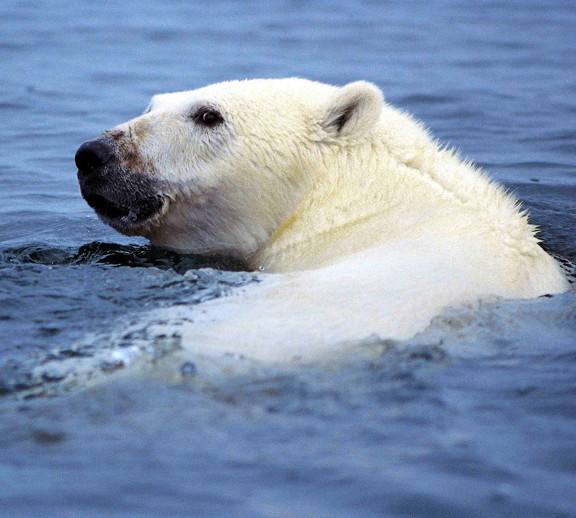 The Nunavut Government has modified its polar bear surveys to incorporate less invasive techniques. The current survey of the M’Clintock Channel sub-population of polar bears involves tracking animals with helicopters and shooting them with darts which gather bits of the bear’s DNA before falling off. The darts are later retrieved and the tissue is analyzed. (WIKIMEDIA COMMONS PHOTO)

The federal government has decided to renew a five-year financial commitment to help fund polar bear research in Nunavut and it comes not a moment too soon.

Next week in Cambridge Bay, the Nunavut Wildlife Management Board will hold public hearings to discuss increasing the total allowable harvest of polar bears in the M’Clintock Channel, a Nunavut subpopulation of bears that the Government of Nunavut is currently surveying.

Drikus Gissing, the GN environment department’s director of wildlife management, said the federal government’s contribution of $1.25 million over five years will help Nunavut plan its next phase of research to ensure population data is as current as possible.

“It shows Canada’s, and Nunavut’s, commitment to its polar bear research, and shows the international world that we have a very robust and very good polar bear management system in place,” Gissing said.

“I don’t know if there’s any other province of another country that spends so much money on one species.”

The GN sets aside about $2 million annually to manage all terrestrial species and of that, roughly one-third goes to polar bears, Gissing said.

Environment Minister Johnny Mike praised the funding arrangement in the legislature this week.

“This new funding commitment will help strengthen our research and monitoring initiatives, and allow us to build upon our already exemplary co-management system,” Mike said June 12.

Mike’s department is just completing the first leg of a three-year survey of bears in the M’Clintock Channel which lies between Victoria and Prince of Wales islands, north of Gjoa Haven and Cambridge Bay.

That bear population is the subject of some controversy in the Kitikmeot region.

But an inventory of bears in 2000 suggested the sub-population had shrunk to 284 bears.

That decrease was supported by Inuit knowledge, the GN says: reports from Gjoa Haven and Cambridge Bay hunters at the time suggested fewer and fewer bears frequenting the area over the years.

A harvesting moratorium was imposed from 2001 to 2003 after which the NWMB imposed a quota of three bears annually. It has never been increased.

Acknowledging that the new GN survey of the M’Clintock population will take several years, the Kitikmeot Regional Wildlife Board has made a formal request to the NWMB to increase the quota to 18 bears annually while they await the results.

The KRWB says the strict quota over the past dozen years has been burdensome.

“This has put a serious social strain on Inuit by restricting opportunities for hunters to teach their children the cultural importance of hunting polar bears and the preparation of polar bear hides and distribution of meat within the respective communities,” says the letter from the KRWB.

The Kitikmeot board feels justified in its request for several reasons, outlined in their letter:

• the moratorium helped the population recover;

• the quota of three animals has been strictly adhered to;

• an Inuit knowledge study and “other studies” suggest the number of bears has increased;

• harvesting knowledge suggests animals move between M’Clintock Channel and the Gulf of Boothia, a separate subpopulation; and,

• the GN is currently consulting with communities and getting new data.

“We do not feel that there is a conservation concern for this population by increasing the current TAH or that it will harm the population,” the KRWG says.

In their submission to the NWMB, it says that even 2013 traditional knowledge assessments peg the number of bears there still a “stable” 284.

“Providing a clear rationale for any decision on harvest level will be particularly important in a context of heightened national and international scrutiny,” says the May 14 submission from Environment Canada.

However, recognizing the “importance of a subsistence harvest to Inuit of the Canadian North,” Environment Canada says an “argument could be made” to increase the quota slightly — above three animals but fewer than 13 — “in order to continue to move towards the agreed-upon target population.”

That target population number is 750 bears.

Environment Canada restates in its conclusions the “intense international scrutiny” over polar bear management and says it “cannot over-emphasize the importance of ensuring that harvest levels are sustainable and follow sound conservation principles.”

It points to a lack of data regarding population numbers and wonders what “other studies” the KWMB is referring to in its submission.

“If these studies contain no new scientific information, the [polar bear specialist group] recommends that the NWMB apply the precautionary principle and wait for the results of the proposed new survey of the MC subpopulation,” wrote the IUCN’s Dag Vongraven in a May 13 letter to the NWMB.

In its lengthy submission to the NWMB, the Nunavut government is suggesting a cautious increase of the quota from three to six animals.

“This small increase in TAH [total allowable harvest] for such a short time frame is not considered a conservation concern,” the GN says.

Biopsy darting, first used in a 2011-2013 Baffin Bay bear survey, consists of helicopters flying low over terrain when a bear is spotted and a scientist shooting it with a dart.

The coloured dart, which quickly falls out, contains tissue samples which are later analyzed in a laboratory. Teams dart animals in the same area for three consecutive years and, by determining through DNA tests which animals are new, they can estimate the size of the population.

This year’s darting, likely to wrap up next week, has so far logged about 100 bears in the M’Clintock Channel, Gissing said.

Canada is home to two thirds of the world’s polar bears and Nunavut is often the subject of global scrutiny because Inuit continue to hunt the iconic species.

“Is polar bear [research] detrimental to other species? Maybe. Maybe we’re spending too much effort on it but we have no choice because of international pressure and international focus,” Gissing said.

“People question why they want to hunt and kill them and for us to justify our management system that allows for sustainable harvesting, we have to make sure we have the science to back it up.”

The NWMB will hold meetings on the KRWB’s request for a TAH review on June 17 and 18 at the Arctic Island Lodge in Cambridge Bay.

Hearings will be open to the public and run from 9 a.m. to 5 p.m. both days with the possibility of evening sessions as well.

The deadline for written submissions expired on May 26. You can read those formal submissions from various parties by going here.