“Right now, our biggest challenge is to find stable funding” 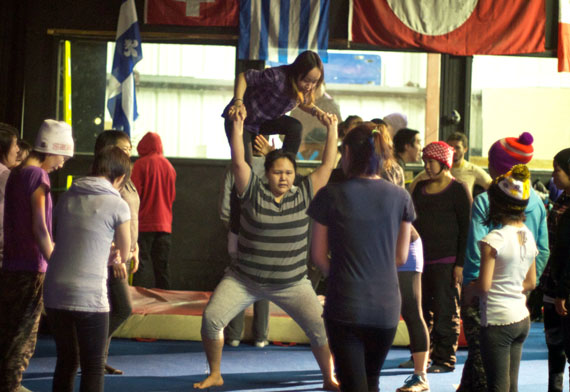 Long-time Igloolik Artcirq performer and instructor Reena Qulitalik attempts to balance a young performer on her shoulders. Artcirq is hosting the workshops for about 70 youth in Igloolik over a two-week period. (PHOTO BY GISELE HENRIET) 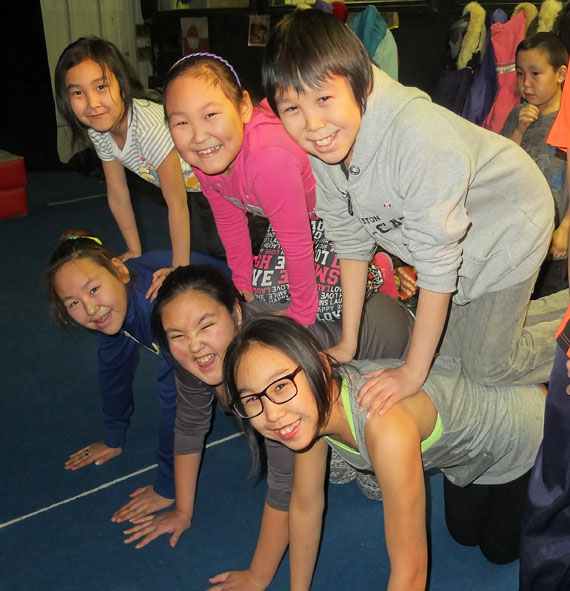 Igloolik youth form a human pyramid this week, one of many circus skills they’re learning at Artcirq workshops this month. (PHOTO BY VANESSA NEALE)

The Igloolik-based Artcirq is hoping to share its message of hope with more communities in Nunavut, through the screening of its documentary Circus Without Borders.

But like many other organizations across the territory, Artcirq struggles with finding the money to do so.

Circus Without Borders, released last year, tells the story of two circus troupes from opposite ends of the globe: Artcirq in the Canadian Arctic and Kalabante in West Africa, over a period of seven years.

The troupes were established by two friends, Yamoussa Bangour and Guillaume Saladin, a Quebecer who has lived in Igloolik on and off since he was a child.

Artcirq’s young performers have blossomed and the troupe has become well-known for its Inuit-inspired shows. Now Saladin wants to make sure youth from across the territory will be inspired by its success.

“The goal would be to tour Nunavut communities, visit every high school, screen the video, perform and then talk with youth,” Saladin said.

“Talk about how they can be involved in the community, and how on our small level we can do something about it.”

Artcirq is doing that on a smaller scale this week. Saladin, three visiting circus instructors, and the troupe’s own local instructors are running a two-week long camp for youth in Igloolik aged seven to 12, and separate workshops for those aged 13 and up.

With the help of those instructors, roughly 70 youth are learning to use a teeter board (a smaller version of a teeter totter) and floor acrobatics.

“Many of them have been coming to circus camp since they were really young.”

The workshops are happening thanks to funding from a few organizations, Saladin said, including First Air, Canada Council for the Arts, the Government of Nunavut’s department of culture and the Qikiqtani Inuit Association.

But Artcirq hopes to secure more stable and long-term funding in order to continue its various activities and visit other Nunavut communities, as well, Saladin said.

In Igloolik, Artcirq’s base, a facility called the Black Box, is now fully-operational and offers circus and recreational activities through the week.

But its operation relies are short-term funds through the GN and the QIA.

“It’s a great thing,” Saladin said. “It’s all youth involved; they maintain it, clean it and run the programs. But right now, our biggest challenge is to find stable funding.”

Saladin said he’s been in contact with the GN’s education department which has expressed interest in helping the circus troupe screen its film in other communities.

Artcirq is doing a free performance for residents of Igloolik at the local community hall Jan.30.

You can watch a trailer of Circus Without Borders here.