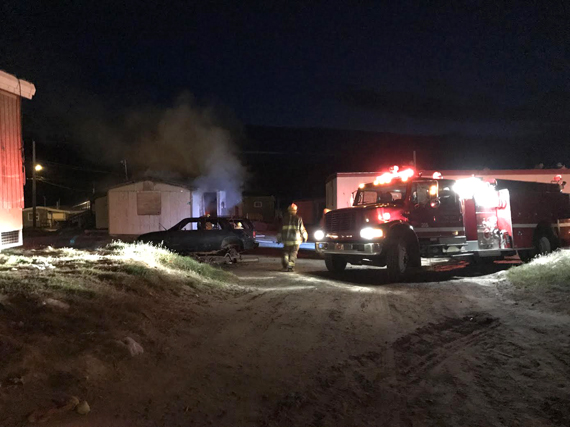 Pangnirtung firefighters responded to two different fires late Aug. 23. There have been five fires in total in the Baffin community since the beginning of the week. (PHOTO BY D. KULUGUQTUQ)

Pangnirtung’s firefighters and local police are trying to find out who or what might be behind a series of fires that appear to have been deliberately set in the south Baffin community this week.

Local fire crews have been called to put out five fires since Aug. 21; two of these started late Aug. 23.

Pangnirtung’s fire chief, Norman Nowyook, said the fires have started in abandoned homes and shacks around the community of about 1,500 people.

No one has been injured in the fires, he said.

But in an Aug. 24 release, the Nunavut RCMP said the homes sustained “substantial internal damage.” The release said fires have been “deemed suspicious and are under investigation.”

Firefighters found a lighter on the ground of one of the fires they responded to late Aug. 24, Nowyook said—the first major clue that an arsonist might be responsible.

“We have been on the radio, asking people to come forward if they have information,” Nowyook said Aug. 24.