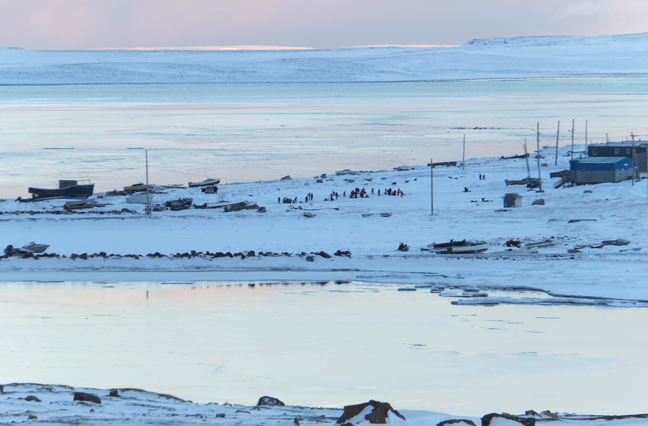 The Government of Nunavut’s Health Department issued a release Jan. 23 reminding the 800 or so residents of Sanikiluaq that any water they consume must come from the reverse osmosis units that have been installed in each household, to help filter out high levels of sodium. (PHOTO BY SARAH MEEKO)

A year and a half after high sodium levels were discovered in Sanikiluaq’s fresh water supply, the issue persists in the Hudson Bay island hamlet.

The Government of Nunavut’s Health Department issued a release Jan. 23 reminding the 800 or so residents of the community that any water they consume must come from the reverse osmosis units that have been installed in each household.

The issue was discovered in mid-2016, when the hamlet tested the community’s fresh water source and discovered high sodium levels.

High sodium intake can have adverse effects on people with potentially weakened immune systems, like infants or elders, or people with high blood pressure.

That summer, the GN installed over 200 reverse osmosis units in the community’s homes, which filter the salt out of the water.

But those filters were intended as a short-term solution, and will eventually have to be replaced.

The GN’s Health Department said Jan. 23 that “the source of the elevated sodium levels was not specifically determined.”

In 2016, Hudson Bay MLA Allan Rumbolt asked the GN to either upgrade the current water treatment plant or construct a new plant for the community.

Last year, then-Community and Government Services Minister Joe Savikataaq said the GN was looking at drawing the town’s water from a new source—Windy Lake, about 10 kilometres outside the community—but first needed to test the quality and quantity of the water source.

Savikataaq also indicated that CGS was in the process of designing a new water treatment unit, but didn’t say when it might be ready to install.