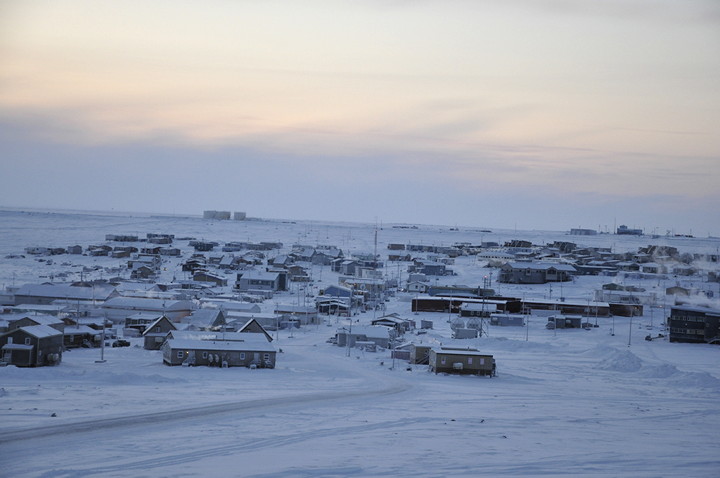 A coroner’s jury in Igloolik is now considering recommendations on how to avoid deaths such as the one suffered by Solomon Uyarasuk, who died by hanging two years ago police custody in Igloolik. (PHOTO BY THOMAS ROHNER)

Lawyers put forward their suggestions before proceedings concluded, raising a number of key issues which came up during the week-long inquest, namely police cell safety and RCMP training.

The jury, comprised of three men and three women from Igloolik — Uyarasuk’s hometown — are charged with determining the circumstances surrounding Uyarasuk’s death and with making recommendations on how a similar death can be avoided in the future.

A coroner’s inquest is automatically triggered when someone dies in police custody.

According to the testimony of local RCMP officers on duty Sept. 23, 2012 — the night Uyarasuk died — and to Ottawa police who were called in to conduct an external investigation of the night’s events, Uyarasuk hung himself with a nylon belt from the food-slot of his prison cell door.

Injuries found on Uyarasuk by a forensic pathologist who conducted an autopsy on Uyarasuk, and who testified earlier in the week-long inquest, were consistent with a death by self-hanging.

The pathologist also found that other injuries sustained by Uyarasuk that night were consistent with local RCMP officers’ accounts of Uyarasuk injuring himself by repeatedly and violently banging his head against a partition in the RCMP truck as he was transported to the Igloolik police station.

Those injuries included a deep gash to his forehead, a black eye as well as cuts, bruises and abrasions scattered around his face, neck and shoulders.

All three lawyers addressed the broken food-slot latch; Uyarasuk reportedly hung himself from the opening and RCMP testified that they knew it was a suicide risk.

Both Mossey and Keats recommended inspections and inventories of all cell-area deficiencies in Nunavut.

Mossey called for an “immediate review” of the deficiencies to be addressed within 12 months and Keats recommended monthly inspections and a log book to track repairs.

Chandler recommended the general contracting process used by the RCMP to address prison cell maintenance at Nunavut RCMP detachments be reviewed in terms of prioritizing and expediting repairs.

The recommendations of all three lawyers acknowledged the lack of training received by the relief-duty officers working the night Uyarasuk died as well.

RCMP officers who were on duty at the time of Uyarasuk’s death were serving in a relief capacity and said they received no such training before or during their deployment to Igloolik.

Mossey recommended that all RCMP officers in Nunavut, both permanent and temporary, receive mandatory training in Inuit Qaujimajatuqangit principles.

Mossey also recommended that the RCMP address what he called “institutional racism” with regard to how police treat and perceive Inuit in Nunavut.

Keats and Chandler both recommended that new and relief-duty officers receive orientation at local detachments to ensure they know where keys, first aid kits and other important tools are, but did not address IQ principles specifically.

Keats and Mossey did agree, however, in recommending that a local liaison be used for future instances when an external police agency is called in for an investigation to improve communication with family and community members.

He suggested the GN replace Nunavut RCMP by the end of the decade with a local police force and in the meantime, the government should create an oversight committee to receive public complaints directed at Nunavut RCMP.

Mossey made other jury suggestions geared toward the RCMP including:

• install video cameras in every RCMP vehicle, detachment and cell in Nunavut;

• create a public awareness campaign informing Inuit of their rights when interacting with the RCMP;

• re-open the investigation into Uyarasuk’s death; and,

• give each detachment suicide-proof clothing for those in custody.

Regarding how the death should be classified, Mossey recommended that it be deemed “unclassified,” meaning the circumstances around the death are unclear.

Keats recommended the jury conclude Uyarasuk’s death was suicide. Chandler made no suggestion with regard to cause of death.

The jury can categorize the death as homicide, suicide, one of natural causes, accidental causes, or they can find the death unclassified or indeterminate, when there is insufficient evidence for any other category.

The jury is expected to finish its deliberations this afternoon, with the results being read at the Igloolik community hall later today.