Dad, 39, threatens to use .375-calibre rifle to shoot seven-year-old in the head 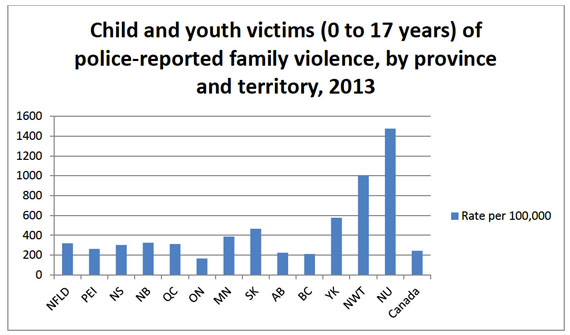 Justice Robert Kilpatrick included this graph in a sentencing judgment in which he sent an Arctic Bay man to jail for assaulting a child with a large-bore .375 calibre rifle. (NUNAVUT COURT OF JUSTICE)

An Arctic Bay dad who kicked his seven-year old son in the stomach and pressed the barrel of a large calibre rifle against the child’s head, threatening to shoot him, deserves a sentence of 60 weeks in jail, Justice Robert Kilpatrick ruled in a judgment released Aug. 28.

In doing so, Kilpatrick rejected more lenient jail terms proposed by Crown and defence lawyers and set firm limits on the application of the Nunavut Land Claims Agreement and the Supreme Court of Canada’s Gladue judgment in such cases.

“The sentence of this court must absolutely repudiate all forms of extreme violence on children. An exemplary sentence is called for,” Kilpatrick said.

At the same time, the man may not own or use firearms for 10 years and must forfeit a big arsenal of guns and rounds of ammunition found improperly stored in and around his house. At least six of those guns were loaded, with no trigger locks.

And he found the Inuit right to use firearms for hunting is forfeited by those who use guns against human beings or their property.

“Absent truly exceptional circumstances, those who use a firearm to commit serious crimes of violence against other human beings should forfeit their right to possess and use a rifle for all purposes,” Kilpatrick said.

Jimmy Shappa, 39, pleaded guilty to three counts: assault with a weapon, storing rifles in a careless manner, and breach of a probation order imposed for an earlier assault on his common-law spouse, Vera Issigaitok.

Police laid those charges after an incident that occurred on the evening of June 17, 2015, when Shappa and Issigaitok had “far too much to drink.”

After the woman left for a while and returned home, something caused Shappa to snap, the judgment said.

He kicked his seven-year-old son in the stomach and aimed the barrel of a .375-calibre Browning rifle loaded with four rounds of Winchester ammunition at the boy’s head.

“This is done with sufficient force to cause a welt to the child’s temple. While doing this Mr. Shappa says to his son ‘Can I shoot you?’” Kilpatrick said in his judgment.

Afterwards, the boy’s mother talked to the boy, found out what happened and called the RCMP.

At the house, police found Shappa passed out on a bed with the .375 rifle lying beside him, with nine rounds of ammunition underneath him. Powerful rifles of that calibre are often used for hunting bears and other large animals.

In the furnace room and behind the water tank police found 10 more weapons of various makes and calibres.

Five of them were loaded and none were secured with trigger locks or stored inside locked cabinets or gun cases. One was a .303 Lee-Enfield, the type of weapon that the federal government gives out to Canadian Rangers.

The also seized a loaded .223 bolt-action Remington and a Winchester 1400 shotgun from another Arctic Bay man who said they belonged to Shappa.

And in a shed beside Shappa’s house, which they searched after they laid charges, police found 18 more rifles, including another Lee-Enfield.

That shed, however, was locked, none of the firearms stored in it were loaded, and police found no ammunition there.

At a sentencing hearing earlier this month, defence lawyer Susan Charlesworth argued for a sentence of time served — equal to the 73 days Shappa spent at the Baffin Correctional Centre waiting for the case to be dealt with — or a period of house arrest at home.

She also argued against a firearms prohibition, saying it would re-victimize Shappa’s family by preventing him from providing country food to his family and community.

Crown lawyer Jean Montgomery asked for a jail sentence of six to nine months for the assault on the child, with a consecutive sentence of two to three months for improper storage of firearms and one more consecutive month for the breach of probation.

Kilpatrick, after a lengthy discussion of all the relevant issues, found the defence position too lenient, but also said the Crown’s proposed sentence wasn’t tough enough either.

“The range of custody proposed by the Crown also falls short of the mark. The proposed sentence range of six to nine months for the assault is less custody than Mr. Shappa received for his earlier 2002 conviction for pointing a firearm,” Kilpatrick said in his judgment.

So he sentenced Shappa to 60 weeks in jail. Minus time served, that means the man will serve out a 52-week jail sentence, followed by an 18-month probation order with numerous attached conditions.

To justify a harsher sentence, Kilpatrick cited statistics that show children and youth in Nunavut suffer the highest per capita rates of victimization in the country.

“Crimes against children remain a pressing and persistent problem in all of Nunavut’s communities. This enhances the need to emphasize the sentencing objectives of deterrence and denunciation when addressing cases involving child abuse,” he said in his judgment.

He also said Shappa was employed as a water truck driver with the Hamlet of Arctic Bay, and does not need to hunt to provide for his family.

And he said the right to use weapons to hunt “is not an absolute right.”

“There is little deterrence or denunciation in a sentencing process that allows an offender to regain his possession and use of firearms after demonstrating irresponsible behavior that endangers the lives of others,” he said.

He ordered the firearms found in the house to be seized and destroyed.

He found that some of the firearms in the shed may belong to other people, so he allowed a period of 60 days for others to claim them from the RCMP if they can provide proof or ownership or proof that Shappa transferred ownership.

And Shappa may not use or own firearms for 10 years, with no exemption for subsistence hunting.

Kilpatrick also sent a copy of his judgment to the Nunavut Director of Child and Family Services and recommended that the seven-year-old “be assessed by a qualified professional to determine whether this child is in need of any therapeutic intervention to address his victimization.”

A full copy of the judgment is embedded below.