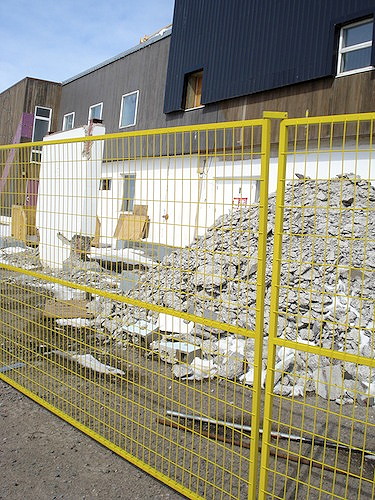 The Qikiqtani General Hospital renovation project in Iqaluit stalled in May 2013. (FILE PHOTO)

Nunavut contractor Arctic Environmental Services Ltd. has been slapped with a $15,000 fine after pleading guilty to a Safety Act charge earlier this month.

The company pleaded guilty June 2 to failing to ensure the adequate instruction of each worker in the safe performance of their duties.

The contractor helped demolish part of Qikiqtani General Hospital in Iqaluit and the charge relates to an incident that occurred during that time, between Jan. 12 and Jan. 16 of 2013.

“The incident involved the exposure of workers to asbestos,” the manager of communications at the Workers’ Safety and Compensation Commission, Kim MacEachern, said in a June 20 media release.

But on June 2 Crown prosecutor Doug Garson conditionally stayed all charges, except for the one.

Arctic Environmental Services began renovation work at the hospital as a subcontractor, alongside NCC Development Ltd, after a different firm, NCC Dowland Construction Ltd, defaulted on a $32.3 million renovation contract for the hospital.

But NCC Construction Ltd. seems to be back on its feet.

A May 21 news release from the federal government says NCC Dowland Construction Ltd. will act as construction manager for the new $84.9-million Canadian High Arctic Research Centre in Cambridge Bay. Work there is expected to begin in the fall of 2014.

Arctic Environmental Services, which has offices in the western Arctic and a mailing address in Alberta, worked on the Baffin hospital site to remove hazardous material, the Government of Nunavut said in May 2013.

According to the Arctic Environmental Services’ website, the company has been operating in Canada since 1991.

“Our ability to offer environmental consulting, contracting and training either as part of a team or as a turnkey service has been extremely well received by all levels of government, aboriginal groups, and by our corporate clients,” their “About Us” page states.