Nunavut Day, a celebration for Inuit and newcomers alike

“Cape Dorset has always felt like home, since we first arrived” 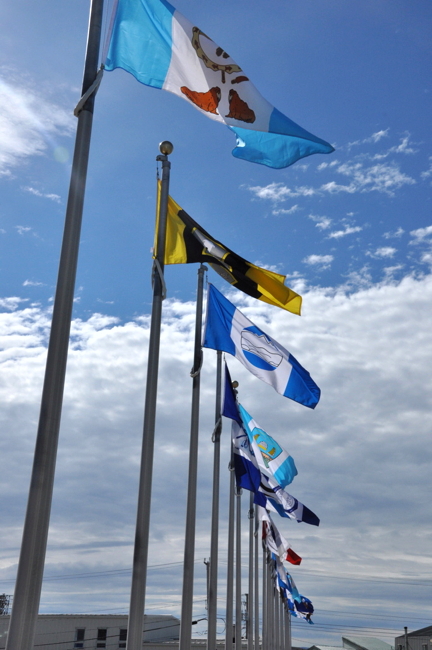 The flags of Nunavut’s 25 communities flutter in the wind outside the Nunavut Legislative Assembly in Iqaluit. (PHOTO BY THOMAS ROHNER)

Born in El Salvador and raised in Calgary, Sandoval moved to Cape Dorset with his family in 2003.

But with communities across the territory celebrating Nunavut Day July 9, Sandoval is an example of how Nunavut’s population has become increasingly diverse.

“Cape Dorset has always felt like home, since we first arrived,” said Sandoval, who works as the recreation director at the local hamlet office.

Sandoval feels so much at home in Cape Dorset that, after leaving the south Baffin community for two years to seek medical treatment for his daughter, Sandoval and his family moved back to Cape Dorset earlier this year.

“Of course, we came back,” Sandoval said July 7.

Sandoval has helped to organize Cape Dorset’s Nunavut Day celebrations for each of the 10 years he has worked with the hamlet’s recreation department.

“Normally we get quite a few people come out, because it’s for the whole community. A lot of people go out boating because it’s a long weekend. But still, we always get a good turn out.”

This year, Sandoval said a parade around town will mark Nunavut Day, followed by traditional and not-so-traditional games.

For example one non-traditional game will be a water balloon toss for elders, Sandoval said.

“The point is they keep tossing the balloon back and forth and take a step back in between each time, so they get further apart. The elder with the last un-popped balloon wins.”

Another game planned for the festivities is a test of strength: Participants will have to carry about 100 pounds of soapstone as far as they can. Whoever carries it the furthest, wins the soapstone.

And of course, Nunavut Day in Cape Dorset wouldn’t be complete without a community feast, Sandoval said.

“This year we’ll be barbecuing Arctic char. A lot of people are excited about that, I think.”

In addition to the char, Sandoval said the feast will include geese, maktaaq and clams.

Up island in the territory’s capital, a different sort of food will help Iqalungmiut celebrate Nunavut Day.

That message caused a bit of a stir among other Iqaluit residents on Twitter.

But the treats don’t end there.

Habitat for Humanity, a charity that helps to build homes for people who otherwise couldn’t afford to, is hosting a chili cook-off July 9 in the parking lot of the Legislative Assembly from 12:30 p.m. to 2:30 p.m.

And the Government of Nunavut will host a cake decorating contest on Nunavut Day in the lobby of the Igluvut Building.

The Nunavut Arts and Crafts Association will also host its annual Nunavut Day craft fair in the Cadet Hall from 11 a.m. to 2 p.m.

For a full schedule of Nunavut Day events in Iqaluit you can click here.