“I struggle from cheque to cheque” 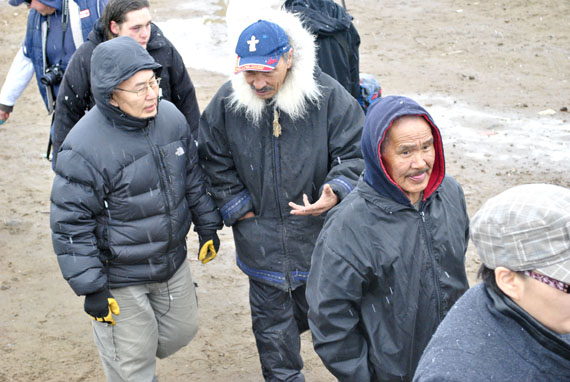 Jack Anawak, the chair of the Nunavut Social Development Council, marches with protestors at the June 9 food price demonstration in Iqaluit. (PHOTO BY JIM BELL) 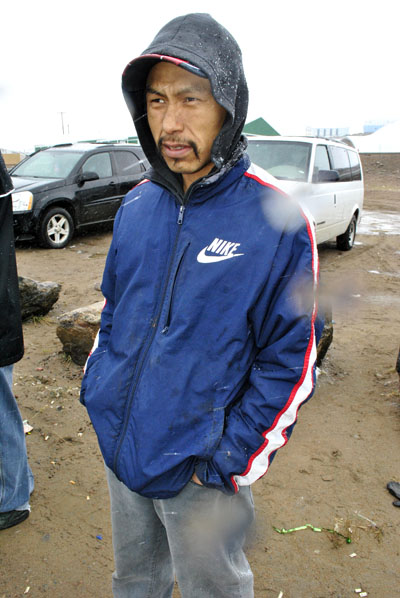 Newkinga Nakashook of Iqaluit says it’s not easy to get by on $320 a month, the social assistance stipend paid to recipients in Iqaluit. (PHOTO BY JIM BELL) 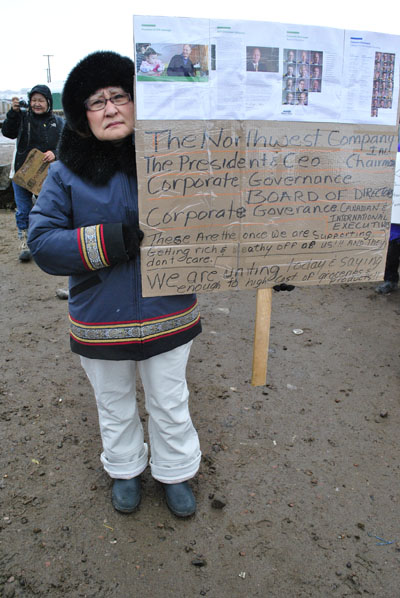 Veronica Dewar of Iqaluit carries a sign bearing a message about the CEO and board of directors of the North West Co. (PHOTO BY JIM BELL) 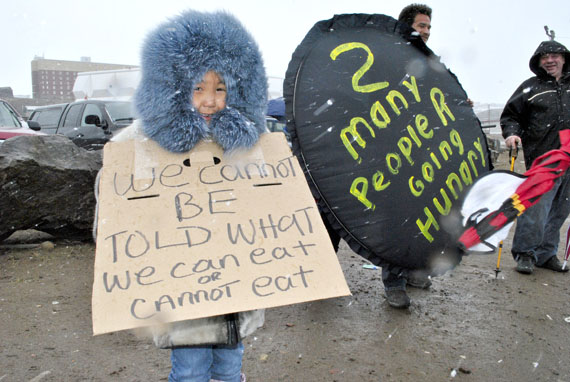 Little Simeonie Willougby of Iqaluit at a June 9 food price protest across the street from the Northmart store in Iqaluit. (PHOTO BY JIM BELL)

It didn’t take much to get Newkinga Nakashook, 33, to show up for the food price protest held June 9 across the road from the hated Iqaluit Northmart store.

Living on the $320 a month’s worth of social assistance loaded onto his North West Co. Cash Link debit card makes that an easy decision.

“As soon as you get the money you buy four or five bags [of groceries] and it’s all gone,” Nakashook said.

When he runs out of food, Nakashook heads to the Iqaluit food bank when it opens every two weeks. Or he panhandles. Some days, he doesn’t eat.

So in spite of a chilling snow squall, he and about 50 other Iqaluit residents gathered, marched and cheered each other on for nearly two hours.

They’re part of a swelling movement in Nunavut led by regular people who can no longer abide the territory’s unbearable cost of living.

More than 14,000 of them have joined an exponentially expanding Facebook group called Feeding My Family: http://ow.ly/btoIP

Leesee Papatsie of Iqaluit organized the group about 10 days ago. On June 9, demonstrators used the Feeding My Family page to organize protest events in Arctic Bay, Grise Fiord, Clyde River, Pond Inlet, Pangnirtung, Igloolik, Cambridge Bay and at Parliament Hill in Ottawa to vent their rage over high costs and low incomes in Nunavut.

“They’re just robbing us, man! I’m a single individual and if I were to do my groceries here all the time I’d have to spend most, if not all my income. And that’s just sick,” Sarah Carriere said.

“This is a great start. A great beginning. Our MP has to sit down and get down to work in figuring out a better strategy for getting food to Nunavut and ending high costs in Nunavut,” Gunn said.

Jack Anawak, the chair of the Nunavut Social Development Council and a vice-president of Nunavut Tunngavik Inc. marched with the demonstrators in Iqaluit.

“You know what’s wrong? When you see northern allowances in job ads that are higher than annual social assistance payments,” Anawak said, referring to the supplemental annual payments given to government workers to compensate for the cost of living in small Nunavut communities.

But it’s not only low income people in Nunavut who are fed up. Middle-class people also feel the pinch.

“I know people with two incomes who can’t make ends meet. They go from cheque to cheque every pay day,” said Iqaluit Mayor Madeleine Redfern, who also marched in the demonstration.

Although people in some Nunavut communities have protested in front of stores that are part of the Arctic Co-ops Ltd. network, most direct their rage at the chain of Northern, Northmart and Quickstop stores run by the North West Co.

“My main issue is to get North West Co. to stop fleecing people up here,” Mike Gardener said.

Another target is the federal government’s Nutrition North Canada program, now widely perceived to have failed.

But observers like Quttiktuq MLA Ron Elliott, who represents the small, isolated communities of Grise Fiord, Resolute and Arctic Bay, believes the program has not reduced prices to an affordable level for his constituents.

Elliot, who marched in the demonstration, has distributed a price survey that, he said, show food prices increased for his constituents after the introduction of Nutrition North.

“I’m glad we’re getting some attention for this,” Elliott said.

By the end of the Iqaluit demonstration, Leesee Papatsie said she felt happy.

“At long last people are confident enough to get together and speak out on this very real issue,” she said.

With files from David Murphy