Nunavut diamond mine clean-up to proceed this year as planned 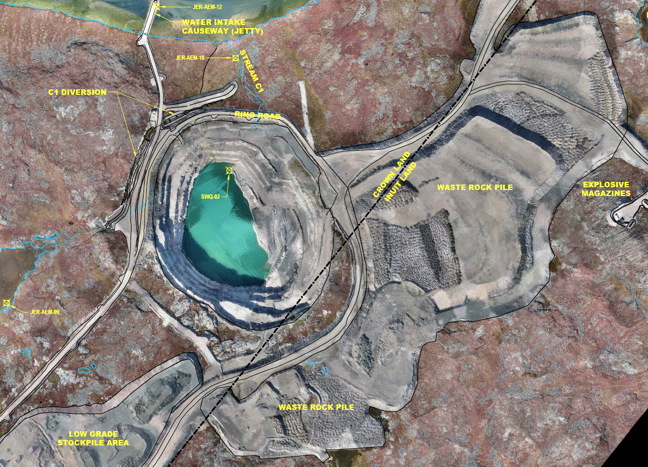 A map showing the Jericho mine site, part of which is located on Inuit-owned lands and managed by the Kitikmeot Inuit Association. Ottawa’s remediation efforts will include only Crown-owned land but discussions are underway between INAC and KIA to incorporate any necessary clean up of Inuit lands as well, during the clean-up. (INAC MAP) 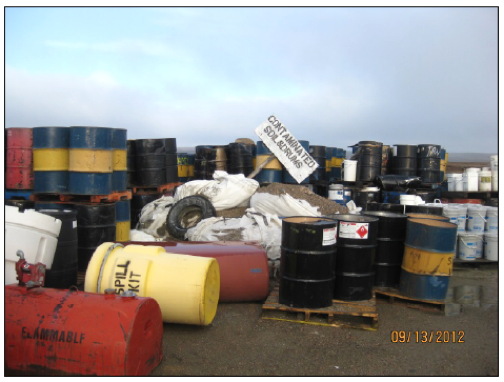 If all goes according to Indigenous and Northern Affairs Canada plans, contaminated waste such as this will be removed this summer from the abandoned Jericho diamond mine in the Kitikmeot. (INAC PHOTO)

The clean up of the old Jericho diamond mine will go ahead without a formal review this year despite a last ditch effort by a B.C.-based company to take over the assets and possibly restart the mine.

The Nunavut Impact Review Board issued a screening report Dec. 22 saying the federal government’s planned remediation and “stabilization” of the abandoned mine, about 260 km southeast of Kugluktuk, can move forward as planned this spring and summer so long as it follows 63 specific terms and conditions.

Those conditions address everything from the creation of the winter road to water use, waste disposal, fuel storage, wildlife disturbances and aircraft restrictions.

The screening report is now in the hands of Carolyn Bennett, the minister of Indigenous and Northern Affairs, for her to decide whether the project should proceed, but since it’s her department which submitted the proposal to clean up the mine, it’s unlikely she will reject it.

The 41-page report makes reference to a proposal by Vancouver junior mining company Crystal Exploration for INAC to delay spending an estimated $10 million to destroy and relocate assets at the site until Crystal could examine adjacent exploration licenses and devise a plan to use Jericho as a staging and diamond processing area.

But INAC said no thanks to that.

“INAC has determined that Crystal Exploration is not currently in a position to provide the necessary security and take on the liability at this time,” the review board writes in its report.

However, INAC recognizes the potential of site infrastructure and as a result, plans to leave the door open for future activity at Jericho.

“Although the proposed project may somewhat diminish the site assets, the majority of the important mine infrastructure (i.e. the truck shop, processing plant and airstrip) would remain intact,” the report says, adding, “INAC would be open to revisiting the re-commercialization of the mine at a future date after the site stabilization was complete.”

Ottawa’s remediation plan of Jericho follows 10 years of failed efforts by several companies to pull enough diamonds from the ground to make the Kitikmeot operation—Nunavut’s only operating diamond mine for a few years—profitable.

Once the mine was abandoned, INAC took over “care and maintenance” of the mine while it looked for a potential buyer. Having exhausted the possibilities, and faced with an old mine site that was deteriorating and contained contaminated materials, INAC came up with a taxpayer-funded scheme to make it safe and secure.

A request for proposals from INAC, issued in November, lists what they hope to complete this year including a 200-km winter road this spring from the Ekati mine to Jericho to mobilize the necessary equipment and vehicles such as excavators, rock trucks, bulldozers, compactors and incinerators.

Work this summer would include demolishing some infrastructure, dealing with contaminated soil and hazardous waste and restoring the site to an environmentally safe condition.

Ottawa expects the bulk of the work to be completed by spring 2018.

The NIRB was satisfied that the work could take place without a formal review but outlines extensive conditions that the winning contractor must meet.

Those conditions include ensuring no damage to the environment and that workers onsite be trained and aware of how to deal with local wildlife. That includes ceasing activities that may interfere with “the migration or calving of caribou or muskox until the caribou or muskox have passed or left the area.”

With further regard to caribou, the NIRB says from mid-May to mid-July, when caribou are observed within one kilometre of project operations, “the proponent shall suspend all operations, including low-level over flights, and use of snowmobiles and all-terrain vehicles, outside the immediate vicinity of the camps.”

The proponent shall further suspend all those activities after July 15 as well if caribou cows or calves are observed within one kilometre of operations.

Two areas which will see the largest number of NIRB project conditions relate to fuel and chemical storage and to the construction of the winter road.

Those detailed conditions are focused on ensuring minimal impact on land, water and animals.

Once INAC chooses a contractor to undertake the remediation plan, the NIRB has requested finalized plans according to the contract awarded and comprehensive annual reports before Dec. 31 each year with the first one expected by the end of 2017.