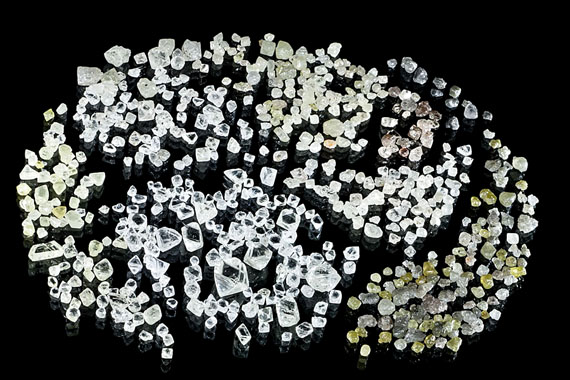 This photo shows 609 diamonds, all greater than 0.11 carats in size, taken from a bulk sample that Peregrine extracted this past summer from its CH-6 kimberlite at Chidliak, about 120 kilometres from Iqaluit. (PHOTO COURTESY OF PEREGRINE DIAMONDS LTD.)

Peregrine Diamonds Ltd, owner of the Chidliak site near Iqaluit, will now try to figure out the dollar value of diamonds taken from a big, promising bulk sample extracted this past summer from its CH-6 kimberlite pipe, the company said Jan. 16.

This coincides with the release of lab work that shows a second, 181.2-tonne batch of bulk sample material contained a grade of 2.87 carats per tonne.

When put together with results from the bulk sample’s first batch, announced this past December, this suggests the CH-6 kimberlite — at an overall grade of 2.78 carats per tonne — could be a top producer.

“We are pleased that the results of the 2013 bulk sample have confirmed that CH-6 is one of the highest grade kimberlite pipes in the world,” the company’s CEO, Eric Friedland, said in a press release.

The company found a big 8.87-carat octahedral, or eight-sided, diamond, and 133 other diamonds greater than half a carat in size.

But the company is still many steps away from being able to develop a producing mine at the site, located about 120 kilometres northeast of Iqaluit.

Peregrine will now send the 1,124-carat parcel of diamonds extracted from the bulk sample to a firm called WWW International Diamond Consultants Ltd. in Antwerp, Belgium, to evaluate their commercial value.

Peregrine will use the result of that evaluation to help estimate the overall value of the CH-6 kimberlite pipe.

“The independent market valuation of the 1,124 carat parcel, and the modelling of the valuation results, should allow for preparation of a resource statement for this high grade kimberlite pipe,” said Howard Coopersmith, an independent analyst who Peregrine hired to help with work on the 2013 bulk sample.

In April 2012, Peregrine calculated that CH-6 likely holds 5.7 million tonnes of kimberlite, based on exploratory drilling to a depth of 375 metres.

CH-6 is one of 67 kimberlites that Peregrine has discovered at Chidliak. Other promising nearby pipes, which lie within an eight-kilometre radius, include CH-10 and CH-20.

In 2014, the company expects to produce its first resource estimate for CH-6.

“This work is the first important step towards establishing economic viability for the project,” Peregrine said in a news release.