“It’s a cool feeling in the whole community, and you can sense it, you know?” 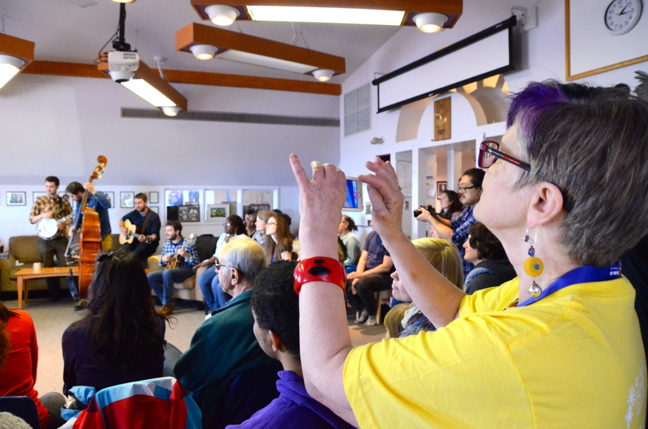 Alianait’s executive director Heather Daley tries to capture the moment on her phone at the Sweet Singing in the Qammaq workshop June 28. Toronto bluegrass band the Slocan Ramblers play in the background. (PHOTO BY DAVID MURPHY) 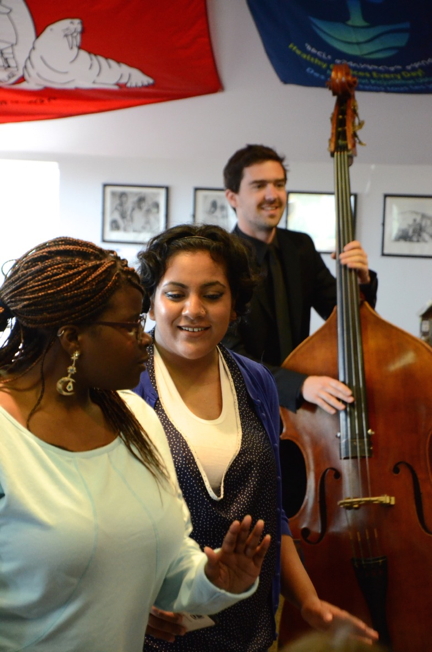 Parul Bahuguna and Alicia Rice sing and dance during a rousing rendition of the Creedence Clearwater Revival classic “Proud Mary” at the Sweet Singing in the Qammaq workshop June 28. (PHOTO BY DAVID MURPHY)

About 50 people huddle in a small room usually reserved for Inuit elders and Inuktitut conversation.

But instead of telling Inuit legends, on June 28 musicians are turning the elder’s qammaq in Iqaluit into a haven for singing songs and telling tales of how, why and what inspires them.

A few locals here today can sometimes be found belting out karaoke once a week at Iqaluit’s Royal Canadian Legion.

Others have major Canadian music awards under their belts.

“You and me, we’re meant to be. Walking free, in harmony,” sings the group at the end of a 10-minute jam.

A banjo peters out, a guitarist awkwardly rounds out the last of his notes, and laughter and applause finally replace the music.

Toronto-based bluegrass band, the Slocan Ramblers, take the lead next and play a sing-along tune. After that it’s Vancouver Island acoustic roots band, the Sweet Lowdown.

In true workshop fashion, entertainers take questions from the floor, like this one from Alicia Rice.

“How do you guys go through your process? How do you make your choice on melody and the harmonics in it?” Rice asks.

Juno-award winner David Myles, most famous for the 2012 ‘Inner Ninja’ song with rapper Classified, speaks up.

“I find I write songs about myself and then we start practicing it. And then they always just become better,” Myles told the group in his usual formal suit-and-tie with thick-rimmed glasses.

It’s a good example of how these workshops help Alianait artists connect with the community.

“You really feel like you’re part of the whole week of activity, which is a really cool feeling. It’s a cool feeling in the whole community, and you can sense it, you know?” David Myles told Nunatsiaq News after the event.

Myles came up for a concert last year in 2014, but not for the festival. This time he’s interacting more with artists, and rekindling some friendships too.

“I’ll see them at other festivals and it’s something that actually lasts. It’s a great feeling.”

One of those lasting friendships is with Arviat’s Abe Agaaqtoq, who opened the Qilaut Concert June 27 for the Slocan Ramblers, David Myles and Greenland’s Nanook.

“I’ve met Abe by being up here. And now Abe and I are friends, we’ll stay in contact and I’ll always have an interest in what he does with his career,” Myles said.

Seeing the two at the concert again is a festival highlight for Alianait’s executive director Heather Daley.

She said Myles might be coming up to Nunavut for a third year in a row because of their friendship.

“And in fact we might be able to organize a little bit of a Nunavut tour next year or something for the two of them. It’s a really special connection,” Daley said.

This bond between Myles and Agaaqtoq — and Alianait, of course — is important for emerging Nunavut artists, she said.

“It’s so hard for Nunavut musicians to get to that next stage because it’s so expensive to go anywhere,” Daley said

Myles is amenable to the idea of Nunavut for 2016.

But just being in the Arctic has had an impact, he said.

“I love seeing Canada. It’s one of the greatest parts of my job. And we’ve toured so extensively over the past 10 years in small towns in Canada. And to now get an experience of the North in this way — it’s really amazing.”

Myles said it’s helped him reassess how he views Canada.

“You kind of just see the map in a different way, you see how much there is in this country. How rich the culture is up here. And how lucky we are to have it as part of our country.”

Iqaluit-based musician Parul Bahuguna from Koel and the Twin Otters leads the last song of the day at the Qammaq. She suggests the Creedence Clearwater Revival classic “Proud Mary.”

There’s five seconds of awkward silence in the room before a mess of conversation and pluckings of stings and checking of vocals.

The chaos dissolves when Bahuguna starts the chorus.

“Bluegrass Tina Turner,” Daley says through a laugh and a big smile.