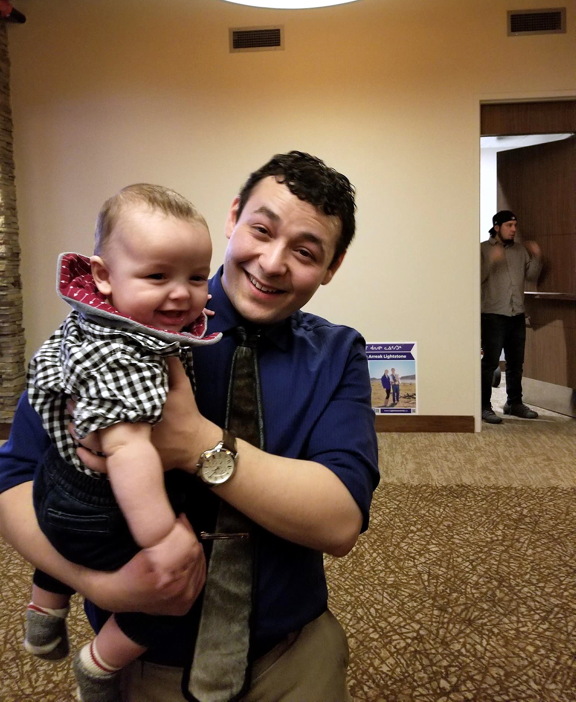 Adam Arreak Lightstone knew he would run in the 2017 territorial election since 2013, the year of Nunavut’s last election, when David Joanasie was elected as MLA for South Baffin at just 30 years old.

“That’s what inspired me to make the decision to run,” Arreak Lightstone told Nunatsiaq News. “At that point I wasn’t quite ready to run, but once I saw him get in at age 30 I thought to myself, four years down the road I’m going to be the exact same age and could potentially win an election.”

That’s exactly what he did.

Jude Lewis came third with 81 votes and Okalik Eegeesiak—who stepped down as president of the Inuit Circumpolar Council to run in the Iqaluit riding—finished last with 64 votes.

At 58.6 per cent voter turn out for the capital riding, it seems that just over half of registered voters bothered to vote. And a lot of them decided that Lightstone’s youthful enthusiasm and dedication to transparency, and fiscal accountability, was worth their support.

“I was fortunate enough to win the confidence of the constituency,” Arreak Lightstone said. “I’m really looking forward to sitting in Nunavut’s legislature and contributing my education and government knowledge to the whole legislative process.”

As the former senior fiscal advisor for Nunavut’s Finance Department, Arreak Lightstone based his platform on accountability and transparency within the territorial government.

He also plans to advocate for support for school-aged children, as well as to make homeownership and transitional housing more accessible to his constituents.

But first, he wants to get to know his fellow MLAs.

“Hopefully over the next couple of weeks I’ll be able to sit down with them and find out what they are looking for and find out their goals and aspirations,” he said.

Arreak Lightstone held his election-night festivities at the Frobisher Inn, where a group of around 30 supporters gathered to watch the election results roll in.

For some reason—perhaps the close number of votes between himself and Ell-Kanayuk—the Iqaluit-Manirajak vote results were some of the last to come in. The first polls for Iqaluit-Manirajak didn’t report until after midnight eastern time, four hours after the polls closed.

Arreak Lightstone said he put months of effort into his campaign, and did two rounds of door-to-door visits—the first round took about three weeks—but he said he was beginning to have doubts as election day grew near.

“Over the last several days I was really second-guessing myself, especially in those last few hours. I really didn’t think I was going to win this,” he said.

Even when his scrutineer came back from the polls around 9:30 p.m., Arreak Lightstone said he was hesitant to believe the numbers.

“At first I was in shock. Eventually it sunk in that I had actually won,” he said. “It was exhilarating. I was so thrilled, shocked, in awe, and so happy, and at the same time overly exhausted.”

The day after the election, as a blizzard blew through Iqaluit, he said, “Right now I’m celebrating by just relaxing.”

“There are so many issues in Nunavut and I want to make sure they will be addressed in time,” he said—meaning, in time for Aiden, and for the next generation.

Arreak Lightstone said he has always looked up to his aunt Eva Aariak, Nunavut’s first and only female premier to date.

And he said he’s glad to be in office with returning politicians such as George Hickes, back in the seat for Iqaluit-Tasiluk, and Joe Savikataaq, who will again represent the constituency of Arviat South at Nunavut’s legislature.