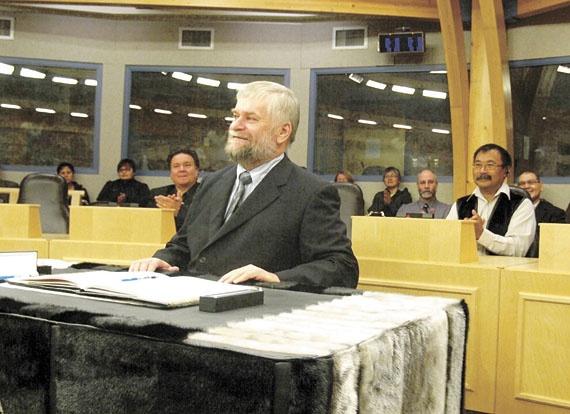 Nunavut MLAs give their colleague, South Baffin MLA Fred Schell, a big round of applause on Sept. 30, 2011, the day of his swearing-in to the Nunavut cabinet. In a report tabled Oct. 30, Integrity Commissioner Norman Pickell found Schell went on after that to breach the Nunavut Integrity Act six times, in one instance by giving false evidence under oath. (FILE PHOTO)

In the report (see document embedded below), tabled in the late afternoon of Oct. 30 in the Nunavut legislative assembly, Pickell recommends Schell pay a $10,000 fine, make a variety of written and oral apologies to the house, his constituents and all Nunavummiut, and meet with “elders” to discuss his conduct.

The $10,000 fine is the maximum allowable under the Integrity Act. Pickell rejected the idea of suspending Schell’s right to sit and vote in the legislative assembly, saying this would punish his constituents, who “did not do anything wrong,” Pickell said.

The report arises from 21 allegations given to Pickell this past April 23 by Dan Vandermuelen, the secretary to cabinet and deputy minister of Executive and Intergovernmental Affairs.

Before that time, on March 11, Premier Eva Aariak stripped Schell of all his cabinet portfolios. Schell, who continues to sit as a minister without portfolio, did not appear in the house Oct. 30.

MLAs had voted to put Schell into cabinet Sept. 28, 2011. For a few months, he served as minister of Human Resources and minister responsible for the Nunavut Housing Corp.

The list of allegations was reduced to nine at the end of a five-day closed-door hearing that began Oct. 10 in Iqaluit.

In the ninth allegation, Pickell found that Schell, while giving evidence about his relationship with Art Stewart, a Government of Nunavut employee involved in another allegation, lied under oath at the hearing.

Schell admitted to this after he was brought back into the hearing as a witness a few days after he gave the false evidence.

On Oct. 13, Schell said under oath that he had no personal grudge against Stewart, who once served as senior administrative officer in Cape Dorset when Schell served as mayor, and then quit the job.

But on Oct. 16, Schell was brought back to the hearing as a witness. Under questioning from lawyers, he admitted that he did have a grudge against Stewart and that he misled the commissioner.

“It is very troubling that anyone, and particularly an MLA, would lie under oath,” Pickell said.

This is the second time that Schell has been found in contravention of the Integrity Act.

In October 2011, acting on information supplied by Janet Slaughter, then Nunavut’s deputy minister of justice, Pickell found that Schell, on June 23, 2009, breached the Integrity Act when he sent an email to a GN employee seeking a decision favourable to the interests of his business, Polar Supplies Ltd.

But that single incident was less serious than the new matters contained in the second review and Schell did not learn from his earlier experiences, Pickell said.

“It is hard to imagine anything more serious than lying under oath,” Pickell said.

Schell who owns all the shares in Polar Supplies Ltd., no longer has any legal control over the business. That’s because, on Jan., 2010, he put it into a blind trust with lawyer Garth Wallbridge of Yellowknife as the trustee and Cheryl Constantineau of Cape Dorset as the general manager.

In his report, Pickell found Schell breached the Integrity Act in the following ways:

• a private conversation that he initiated with the president and chief executive officer of the Nunavut Housing Corp., in which Schell vented about NHC contractors staying in a Cape Dorset hotel owned by Huit-Huit Tours, which competes with a hotel owned by Polar Supplies Ltd.;

• while minister responsible for the housing corporation, Schell telephoned an NHC staff housing manager about overdue rent on a house that Schell rents to the NHC, putting himself in a conflict of interest;

• abusing his ministerial authority by making inappropriate inquiries about a GN employee, Arthur Stewart, against whom he had a grudge;

• abusing his ministerial authority by making inappropriate inquiries about a GN employee, Shawn Maley, who had run for hamlet council in Rankin Inlet;

• breaching six “general provisions” of the Integrity Act; and

• giving false evidence under oath about his relationship with Arthur Stewart.

On three other allegations, Pickell found that Schell did not breach the Integrity Act.

Although Cheryl Constantineau is the manager of Polar Supplies under the blind trust, Pickell found no evidence that this arrangement led to a breach of the blind trust.

• An allegation that Schell breached the Integrity Act by misleading the secretary to cabinet and the Integrity Commissioner about the circumstances under which Michael Constantineau was hired as his executive assistant.

Pickell found the “optics of hiring Mr. Constantineau did not look good” but found the matter was shrouded in miscommunication and misunderstanding, and there was no evidence of an attempt to contravene the Integrity Act.

• An allegation that Schell breached the Integrity Act by renting a house to the Nunavut Housing Corp. Pickell said this falls under a section of the act that permits such arrangements if they do not affect the MLA’s performance. He retroactively granted Schell permission to rent the house to the government.

Pickell also noted that as Schell’s executive assistant, Michael Constantineau, a close friend of Schell, gave the MLA poor advice on several of the issues that arose within the Integrity Act complaint.

“Because of their closeness, Mr. Constantineau appears to have lost the ability to be able to stand back, analyze a situation and be objective with his advice to Mr. Schell,” Pickell wrote.

“That is unfortunate, because one of the roles of an executive assistant is to give the minister sound, objective advice. I believe that was lacking when it came to several of the issues examined in this review…”

Polar Supplies Ltd. is still enmeshed in a series of complex legal actions involving the Hamlet of Cape Dorset and Huit Huit Tours. At the behind-closed-doors hearing, Pickell allowed Steve Cooper, the lawyer representing the Polar Supplies blind trust, to listen to proceedings to ensure any future litigation is not prejudiced by the Integrity Act review.

It’s now up to Nunavut MLAs to either accept or reject Pickell’s report.