“We are not uneducated. We do not have huge debt with public housing. We are able to work” 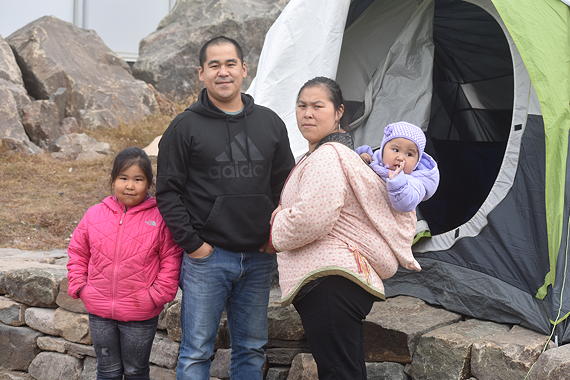 This family of four pitched a tent outside the legislative assembly in Iqaluit on the evening of Monday, Sept. 24. They say they’re running out of couch-surfing options this winter, and they intend to keep sleeping in their tent until they’re offered a spot with public housing. (PHOTO BY COURTNEY EDGAR)

Brian Tagalik has lived in Iqaluit for half his life, and he has a college education. So does his common-law partner, who has a job she likes at the hospital.

They have two young daughters. One is seven years old; the other, 18 months.

One thing they don’t have, though, is a home.

On Monday, Sept. 24, around midnight, the couple pitched a tent on the grounds of the legislative assembly in Iqaluit when they say they ran out of couch-surfing options.

The couple wants to send the message that Inuit are not being prioritized when it comes to public and staff housing—and that needs to change.

The family plans to sleep outside the legislative assembly building until they are offered a spot in public housing. They have heard that their names will be moved higher up the waiting list if they are living in a tent.

“That being our final option and winter coming and us being couch surfing for the last four years, we thought: there is no way we are going to survive another winter doing this,” Tagalik said.

This precarious housing situation is sometimes described as “hidden homelessness.”

Tagalik has been staying home to care for their daughters. Pitsiula Ashoona, Tagalik’s partner, has been working in relief and casual positions for the Government of Nunavut for years.

These short-term contracts meant she wasn’t eligible for staff housing.

Only 377 out of 1,420, or 26.55 per cent, of government staff employees who receive staff housing are Inuit from Nunavut, according to statistics released by the Department of Finance in late June.

The Department of Health had one of the lowest percentages of Inuit receiving staff housing, with just 19.7 per cent.

The family says they’ve been on the waiting list for public housing for about four years. But because they left Nunavut for nine months at one point, their wait had to start over again when they returned.

The couple met with cabinet ministers on Wednesday morning, when they were invited to attend a Iqaluit Housing Authority meeting scheduled for that night.

A representative of the premier’s office said they would talk to the health minister about expediting the process of converting Ashoona’s job from a relief position to a casual term or indeterminate position, said MLA Adam Arreak-Lightstone, who was also at the meeting. That could make Ashoona eligible for staff housing.

“It is unfortunate that they have been through all of this, especially with their little ones,” Lightstone said.

“I applaud them for conducting a demonstration, putting a face to the dire housing needs in Iqaluit which I think the Nunavut Housing Corp. and its board of directors need to understand.”

For the last four years, the family has been living with friends, family and acquaintances “until they get sick of us,” Tagalik said.

While they contribute financially with rent, around $800 a month, they also are expected to buy groceries and other things for the people they live with.

Ashoona pays almost $1,000 every two weeks on rent, bills and groceries to the people they couch-surf with. But the rooms they rented were always temporary and cramped with her partner and kids.

Sometimes friends and family have asked for groceries, taken their money and then kicked them out, they say. Others used their belongings without asking.

“When couch surfing, if someone wants to wear my amauti, they just take my amauti,” Ashoona said.

Often when they stayed with kinder friends and family, soon someone else they know would move to the city needing a place, and they would have to leave to make room for them.

People help you out for a week or two, then think that you owe them forever, Ashoona said.

One person took rent money from them for a month and then treated them disrespectfully for the last three weeks of their stay, trying to force them to leave, but refusing to give their money back, she said.

They have lost nearly all of their possessions in the last four years. What they have in their tent—mostly bedding, clothes and a Coleman stove—is all they own.

“We are not uneducated. We do not have huge debt with public housing. We are able to work. We can get private housing. We can get everything that we need for our family to sustain ourselves,” said Tagalik.

“But in Nunavut we are not given that opportunity.”