Nunavut family thanks police for identifying remains of missing woman

“Now she can rest in peace,” says family of Mary Rose Keadjuk 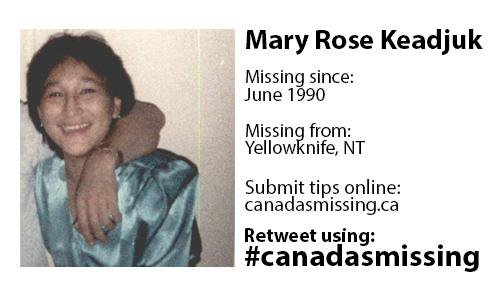 Mary Rose Keadjuk of Kugluktuk went missing in 1990 while she was living in Yellowknife. Police have only just been able to identify Keadjuk’s remains based on bone fragments found in the city. The investigation into her disappearance continues.

A Nunavut family says it’s thankful for a 27-year search effort that has finally identified the remains of a missing Kugluktuk woman.

Mary Rose Keadjuk, 24, went missing in 1990 from her Yellowknife home.

Bone fragments discovered years later in 2003 have undergone repeated analysis. But it was only recently that a new analysis yielded forensic DNA results that identified the remains as belonging to Keadjuk.

“We the Keadjuk family, friends and relatives would like to thank the [RCMP] in Yellowknife….and all those involved in finding our sister Mary Rose Keadjuk,” the Keadjuk family wrote in a letter that was tabled in Nunavut’s legislative assembly March 8 by Kugluktuk MLA Mila Kamingoak.

“Thank you for being persistent in the case and never giving up the search. Now she can rest in peace and there will be proper closure.”

Keadjuk was 24 when she went missing June 28, 1990. She was living at the Gold Range Hotel in Yellowknife at the time, where police later found her personal belongings.

In 2003, a bone fragment was found near the Con Mine area of Yellowknife. Police searched the area but found no other remains.

The bone fragment was sent for DNA testing at the time, but did not produce any results.

The fragment was tested twice more in recent years. The Northwest Territories RCMP said it was improvements in technology that finally produced a match and allowed the coroner’s office to identify Keadjuk.

“The family is extremely grateful for the efforts made on behalf of their relative and have asked me to table this letter in the House on their behalf in order that they can publicly thank all those involved in resolving this case and helping them reach closure,” Komingoak told the legislature March 8.

The investigation into Keadjuk’s disappearance continues, the RCMP said.

N.W.T. RCMP continue to ask the public to send them any information they may have on Keadjuk’s disappearance in 1990 by contacting police at 867-669-1111. The public can also provide information anonymously at 1-800-222-TIPS or online at www.nnwtnutips.com.