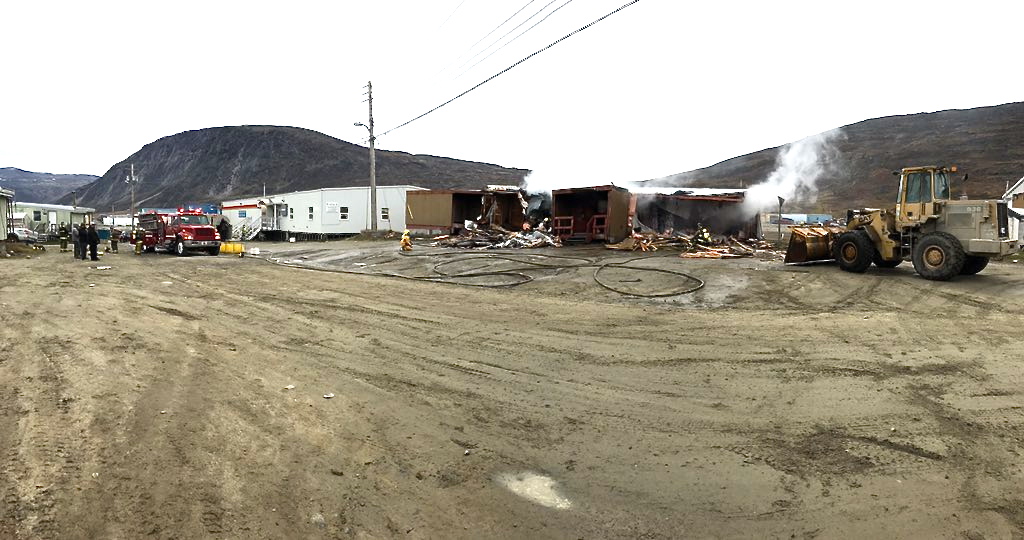 Yet another blaze in Pangnirtung: Firefighters deal with the smouldering remains of a Northern store warehouse early Sept. 8. Since Aug. 21 in Pangnirtung, local fire crews have been called to put out five fires, which the Nunavut RCMP said were “deemed suspicious and are under investigation.” (PHOTO BY DANIEL KULUGUQTUQ)

Police and firefighters are investigating yet another suspicious fire in Pangnirtung.

Firefighters were called early Sept. 8 to douse a fire at the Northern store warehouse in the south Baffin community.

Nunavut RCMP said the building was unoccupied at the time of the fire, but called the damage “extensive.”

The warehouse was well-stocked from recent sealift deliveries, and the RCMP said that any materials in the building were completely destroyed in the fire.

But while police said they are investigating, they wouldn’t say if they believe the fire was started by an individual or group thought to be responsible for at least five fires in Pangnirtung in less than a month.

Most of those fires have been started in abandoned homes and shacks around the community of about 1,500 people.

Police are asking anyone with information about this or any of the other incidents to contact the local RCMP detachment at (867) 473-0123.