“The view is every fire is an arson, and it’s not” 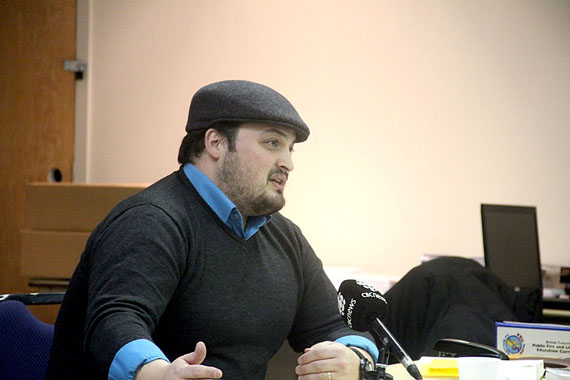 Cpl. Denis Lambe talks about RCMP procedures to a group of firefighters gathered in Iqaluit for a 10-day training workshop on preventable fires. (PHOTO BY SAMANTHA DAWSON) 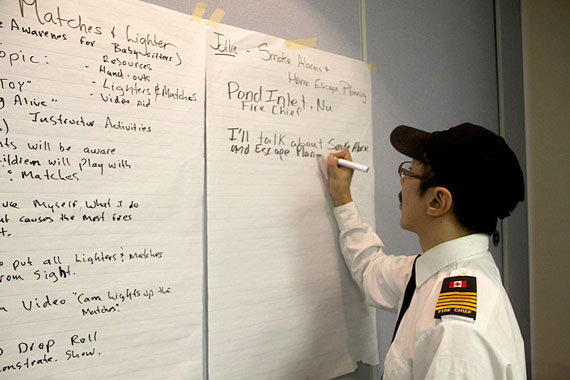 Jollie Enoogoo, the fire chief in Pond Inlet, works on a presentation during a training workshop put on by the Nunavut Municipal Training Organization and the Government of Nunavut’s fire marshall’s office at the Navigator Inn in Iqaluit Jan. 28. (PHOTO BY SAMANTHA DAWSON) 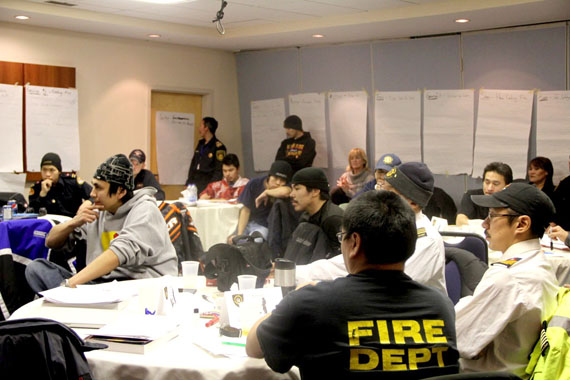 A group of volunteer firefighters from across Nunavut listen to Cpl. Denis Lambe talk about how the RCMP gathers evidence at fire scenes, such as footprints and taking statements. (PHOTO BY SAMANTHA DAWSON)

Most fires started by people in Nunavut are preventable, Arviat’s volunteer fire chief, Joseph Kaviok, said at a 10-day fire training workshop Jan. 28 in Iqaluit at the Navigator Inn.

He’s one of 20 volunteer firefighters from across Nunavut attending the event, put on by the Nunavut Municipal Training Organization and the Government of Nunavut’s fire marshall’s office, in an effort to reduce the number of preventable fires in the territory.

The workshop participants will also complete a fire-setter intervention course, the first time such a course has been offered in Canada.

Kaviok said the fire-setter intervention course will help Nunavut in the long run by teaching people how to avoid accidental fires.

Kids should be taught not to play with matches, lighters, or candles, and not to hide when a smoke alarm goes off.

“They tend to hide in the closet or under a blanket. We tell them don’t do that. Get on the floor and crawl out,” he said.

That’s the kind of information that volunteer fire departments need to pass on to their communities in Inuktitut, Kaviok said.

But when it comes to arson, fire departments can only try their best to find out what happened.

“Once we find out if it’s an accident or arson we investigate and take pictures of it [the damage] and tell exactly how it started and with what, then we pass that on to the RCMP,” he said.

Cpl. Denis Lambe of the Nunavut RCMP told the group of volunteer firefighters that their work as first responders is helpful.

Arson in the communities is the responsibility of the local fire departments, he said.

Unless someone dies in a fire, or the fire department notifies the police about a suspicious fire, the RCMP do not investigate, Lambe said.

Lambe said he doesn’t believe Nunavut has the highest number of arson cases in the country.

And the number of accidental fires is greater than those caused by arson.

“The view is every fire is an arson, and it’s not,” Lambe said.

Suspicious activity is fairly easy to determine, he said, because of abnormal burn patterns.

But generally speaking, there is always more fire damage in Nunavut than in other parts of Canada because communities have limited resources for dealing with fires, Lambe said. Some communities have only one water truck.

Andrew Morgan, a psychiatrist with the Government of Nunavut, explained some of the reasons that people start fires on purpose.

He agreed with a firefighter who told him, “there’s no one answer.”

“There certainly isn’t a single answer, and I think from our point of view at mental health, we still want to break that down a bit further to find out why certain people have committed fires,” he said.

“If someone is really angry and wants to take revenge on someone, how did they get to that point? Are they depressed, can we treat that depression and help prevent them from doing anything like that again?” Morgan said.

Other reasons for starting a fire on purpose include covering up a crime and trying to intimidating someone.

“Did they do it because in the moment they were drunk, and they were angry, and it seemed like a good idea at the time?” Morgan asked the group during their discussion.

Starting fires can also be a form of protest, or an act that enables the person to “be the hero” by rescuing whoever was inside the burning building.

Kaviok said he encourages people to ask their fire departments about any questions they might have, especially after going through training that addresses arson and accidental fires.

“They might think the fire department is just there to put out fires. They are there for public education too,” Kaviok said.