Nunavut food coalition gets up and running 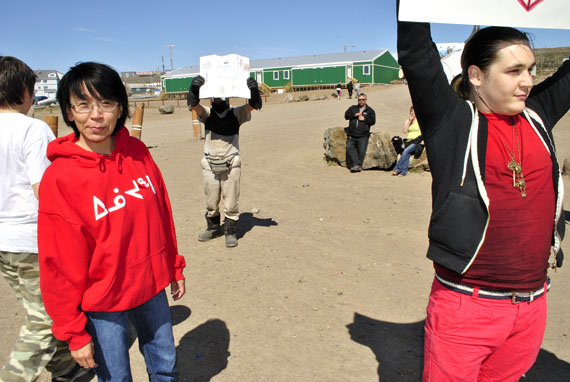 What the organizers of the “Feeding my Family” movement said at the first June 26 Nunavut food security coalition meeting was interesting to hear, says Ed McKenna, director of Nunavut’s anti-poverty secretariat.

“One of the things they expressed to us is they felt very strongly about their independence,” McKenna said. “With what they’re doing they’re having a big impact.”

But the members of the coalition, which includes representatives from eight Government of Nunavut departments, Nunavut Tunngavik Inc., Kitikmeot Inuit Association, Kivalliq Inuit Association and Qikiqtani Inuit Association, have no choice but to work together because “there’s not a single government department or any Inuit organization that will be able to make progress on its own,” McKenna said.

According to the “Feeding My Family” website, a spin-off of the successful Facebook page, the group is “about bringing awareness to the rest of Canada and the world about the living conditions in Canada’s newest territory.”

The site goes on to say that “we now find ourselves balancing that relationship between two worlds. As proud Canadians it disheartens us that an estimated 70 per cent of Inuit homes with school age children find themselves food insecure.”

Organizers Leesee Papatsie and Leetia Janes, who were invited to and attended the morning meeting, spoke for more than an hour, going over their scheduled half-hour time.

“We tried to capture everything this group has shared. I hope Leetia and I properly represented you guys. I would like feedback on what we might have missed and how we are able to properly represent you,” Papatsie posted on the “Feeding my Family” Facebook wall.

Their presentation included ideas for next steps: working with partners, ensuring people’s voices are heard, having more protests, presenting and promoting viable short and long-term solutions to food insecurity, creating a donation fund, making sure the Nutrition North program works for the people not the private sector, and being part of the coalition.

They also touched on wanting better competition and more options for suppliers in order for the mail order programs to work.

The women noted that they will keep the momentum going. There are no easy fixes, but they said they believe there could be a better system in Nunavut.

“We have heard from Nunavummiut across the territory that food insecurity is a problem that needs to be addressed,” Peter Taptuna, minister of economic development and transportation said in a June 28 news release.

“I am pleased that the first meeting to create the Nunavut Food Security Coalition was a success and the partners are moving forward collaboratively.”

Other issues brought up were access to country food, pricing, storage and distribution systems, public information and education on food purchasing, and support for community-led food initiatives.

After a formal memorandum of understanding on the coalition is reached, and signed, participants will understand how community and industry partners can be involved.

Then, the coalition will be open to other groups.