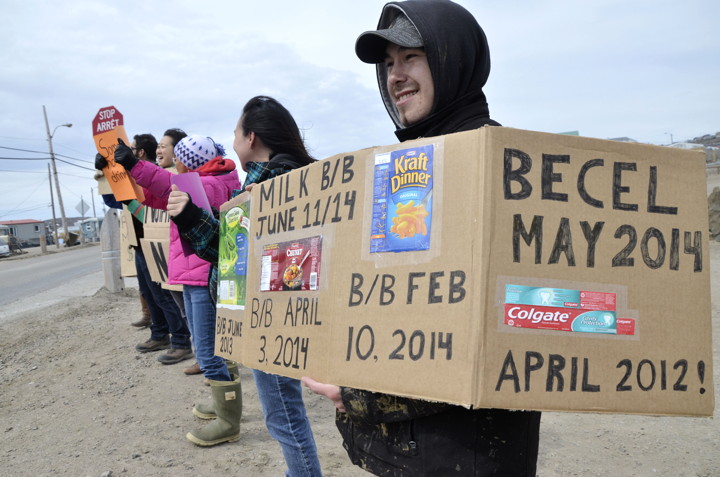 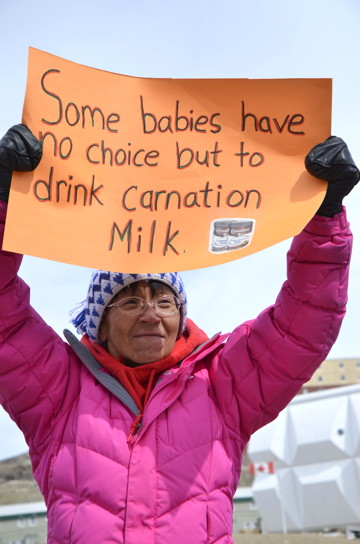 Organizer of the June 14 food protest, Leesee Papatsie, holds a sign at a protest held across the street from Northmart in Iqaluit. About a dozen people came out to raise awareness of overpriced and expired food in the North. (PHOTO BY DAVID MURPHY)

The exorbitant price of food in the North wasn’t the only thing Leesee Papatsie and her group of about a dozen supporters protested at an event in Iqaluit held June 14 across the street from the Northmart store.

Protestors fought turbulent winds that blew cardboard signs out of the hands of some sent hunched-over protestors chasing tumbling signs for metres down the road.

Some of the colourful signs, displayed before passing cars, contained messages similar to those used in past food protests.

“Greed doesn’t feed” read one sign. Another read “Nutrition? North,” a jab at the federal subsidy program that lowers the cost of shipping air-freighted food to places like Nunavut.

The Nutrition North Canada program is currently being reviewed by the Auditor General of Canada, and a report will likely be issued this fall.

Papatsie’s bright orange sign read, “Some babies have no choice but to drink carnation milk” — a brand name form of evaporated milk.

“Mothers have to buy Carnation milk for their babies because regular milks are too expensive,” Papatsie said to a background orchestra of honks from passing cars.

This is the third consecutive year Papatsie has staged a food protest, which started shortly after she created the Facebook group Feeding My Family.

The page went viral and now totals more than 20,000 members who post photos of overpriced and deteriorating foods in grocery stores.

But not much has changed since the first protest in 2012, Papatsie said.

“Nothing. I mean, nothing. Some fruit and vegetables, the price has gone down, but there’s still high prices and there’s still expired food and best before dates on the shelves.”

That’s a new theme at this year’s protest — exposing a long-held practice by northern grocers of selling expired, moldy or rotten food.

“It’s very common in the North. I think all the Northmarts have had experience with expired best before date food,” Papatsie said.

In fact, Iqaluit resident Norman Nungaq rummaged through his cupboards searching for boxes of foods that have passed their best before date and glued the products to his four-paneled cardboard sign.

“We looked through our cupboards and found many foods that were expired, even from last year, even that were bought this month,” Nungaq said.

However, the North West Co., which owns the Northmart chain, thinks there’s some misinformation about what they can and cannot sell.

“There is a difference between expired products and selling certain products after their best before dates,” Derek Reimer, director of health products at the North West Co., told Nunatsiaq News from Winnipeg.

Some food products such as cereal, dry pasta and canned goods, may be sold after their best before date has expired.

“According to the Canadian Food Inspection Agency, these foods are still safe to eat when the date has passed,” Reimer said. “However, food may have lost some of its freshness or flavour.”

The company will allow the sale of non-perishables that have been brought in by sealift.

“If necessary, stores are permitted to sell these products, these sealift products, until the next sealift shipment has arrived,” Reimer said.

“Due to the unique and high freight cost of shipping cost by air, our customers can benefit from the lower prices on these products,” Reimer said.

“So that’s why we offer it,” Reimer said.

But Northmart doesn’t sell perishable foods after a certain date, he insisted.

“We do not sell perishable foods after its best before date. We will not do that.”

Reimer said customers who find such products can complain to management, and have the food exchanged or refunded.

“In terms of our produce and our dairy products and so forth, these products are shipped up regularly by air and we diligently check our shelves and monitor for freshness,” he said.

George Hickes, MLA for Iqaluit-Tasiluk, raised the issue June 12 at the legislative assembly.

“I realize that the department of health has inspectors to go into certain facilities to check on the health conditions. I am wondering: is there a component of their department that checks on expired foods in the stores of Nunavut?” Hickes asked Health Minister Monica Ell.

But Hickes didn’t get an answer. Ell took the question as notice, meaning she’ll answer at a later date.

Hickes also called Papatsie’s efforts “tireless” for staging the food protests, and for creating the Feeding My Family Facebook group, which was the catalyst for a movement that attracted national attention.

Taha Tabish, another June 14 protest participant, sees Papatsie as somewhat of an inspiration.

He nominated Papatsie for an Everyday Political Citizen award, a national award that promotes political participation in Canada.

“Leesee’s name immediately came to mind,” said Tabish, who first heard of the movement when he lived in Toronto in 2012.

Now that Tabish is living in Iqaluit, he came out to lend a voice to the movement.

“There’s communities, not just in Iqaluit, who are facing inhibitively expensive food prices, lots of [them] expired,” Tabish said.

Papatsie is now inviting people to contribute to a letter-writing campaign, directed at Nunavut MP Leona Aglukkaq, which urges Aglukkaq to look into reducing the cost of food and prohibiting the sale of expired food.

A template of that letter can be found here or on the Feeding My Family Facebook group, along with the address of Aglukkaq’s constituency office.