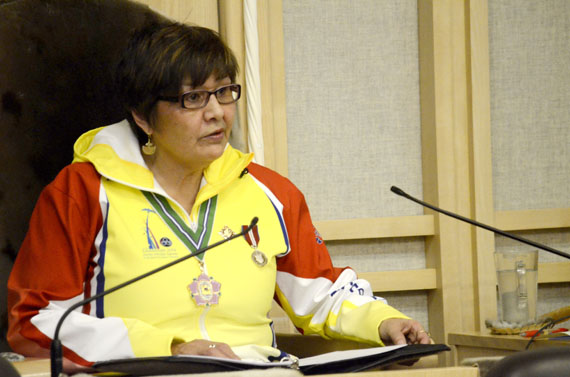 Nunavut commissioner Edna Elias said Nunavut is “on the edge of change” but still faces “pressing challenges” as she opened the second session of the fourth legislative assembly March 20 with a commissioner’s address, Nunavut’s version of the throne speech.

“While we respect the achievements of previous assemblies and continue to build on their accomplishments, we are mindful that our needs must be addressed in the immediate and long-term,” Elias said on behalf of the territorial government.

Elias said the new mandate, called Sivumut Abluqta, “endeavors to make Nunavut a better place for our children, grandchildren and all Nunavummiut.”

MLAs developed the mandate statement during a caucus retreat held Feb. 18 to Feb. 21 in the western Nunavut community of Kugluktuk. Most of its content is reflected in the March 20 throne speech.

The commissioner addressed included a big focus on education, with specific announcements in the near future..

• a framework to monitor student progression through school and the their understanding of the school curriculum, a likely response to demands that social promotion be ended.

“We know that education is the single most-effective way to improve lives,” Elias said.

Elias said also she looks forward to a review of the Education Act.

“It is an investment in our future.”

Elias listed other things the government will concentrate on.

One is the territorial-wide community plebiscites on the sale and ownership of municipal lands that the Nunavut government wants to hold in 2016, calling it a “significant milestone.”

Another is what the speech calls “community-based crime prevention initiatives.”

“We are considering legislation that strengthens a law enforcement officer’s ability to seize property and proceeds believe to be a result of unlawful activities.”

That’s also known as civil forfeiture, something that was brought up in the winter session of the assembly.

Elias also announced the government will extend the Nunavut suicide prevention strategy action plan, which was due to expire this year.

And her speech said the Nunavut Food Security Coalition is introducing a Nunavut food security strategy and 2013-2016 action plan.

On infrastructure,the throne speech mentioned the federal government’s promised $419-million Building Canada Fund for Nunavut over the next 10 years.

And Elias said the Government of Nunavut is working towards renewing the Labour Market Agreement with Ottawa.

“It is an agreement that must ensure more Nunavummiut are able to receive funding and other supports for education and training to enter the workforce,” Elias said.