“I think that would be best for the public, because HTOs are right in the communities” 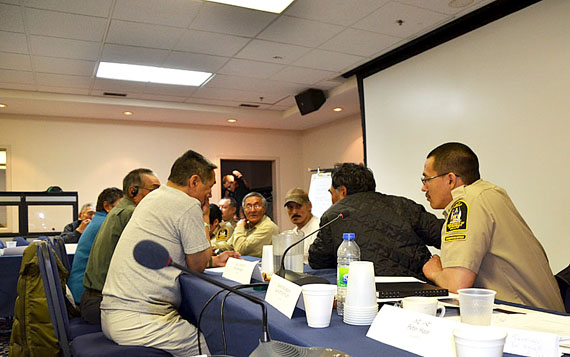 Delegates at the Baffin caribou workshop, including HTO members and conservation officers, discuss possible solutions for Baffin caribou populations July 24 at the Navigator Inn. in Iqaluit. (PHOTO BY DAVID MURPHY) 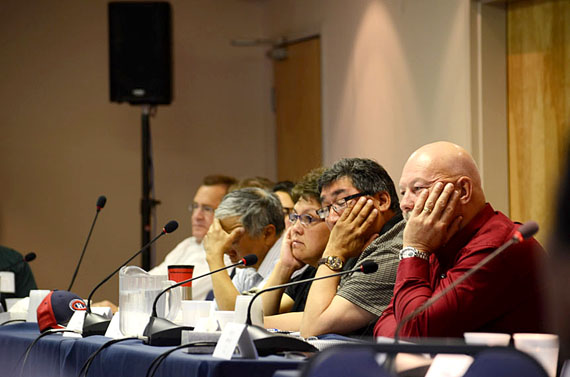 Glen Williams, right, listens to delegates at the Baffin caribou workshop July 24 at the Navigator Inn in Iqaluit. (PHOTO BY DAVID MURPHY)

Hunters and trappers organizations, along with several Government of Nunavut departments, grappled with how to manage the rapid decline of Baffin Island caribou at a workshop held in Iqaluit July 23 and July 24.

The situation looks bleak right now for caribou — a 2012 aerial survey conducted by the GN found only 1,065 to 2,067 caribou in the south Baffin region.

This is a “critical low” according to the GN’s Department of Environment manager of wildlife research, Lynda Orman, who gave a presentation on the decline on July 23.

Williams said caribou population cycles go up and down throughout the decades, and this is just a natural process.

“It’s not a new phenomenon. It’s nothing they haven’t seen before. This is just something that happens,” Williams said.

“Personally, before, I’ve been through this with Peary caribou,” Williams said.

“I was around in the ‘80s when there were like 26 caribou left on Bathurst Island. And we heard yesterday that now there could be as many as 1,200,” he said, referring to a speech given by Grise Fiord delegate Laisa Ningiuk.

But getting the population back up to full health is Williams’ main concern.

Williams said in a speech that there are two ways to manage the caribou — either Inuit self-regulation, or an enforceable strategy that means more government involvement.

The enforceable strategy is when a community HTO, to enact harvesting regulations, has to go to their regional wildlife organization to request a decision.

This strategy has been accepted by the Coral Harbour HTO for the barren ground caribou on Southampton Island, according to Williams and Orman.

“They wanted to have tags, laws, and they wanted it to be enforceable. That means if someone broke the law, the government could take them to court,” Williams said.

However, when the Coral Harbour HTO asked for a total allowable harvest of 1,500, the government only granted 1,000 tags, Williams said.

The other strategy that most delegates favoured is what Williams calls a more “traditional” strategy — Inuit self-regulation.

That’s when Inuit HTOs regulate the hunting of caribou.

“I think that would be best for the public, because HTOs are right in the communities themselves. And it’s always, for wildlife conservation purposes, they’re all experts,” said the deputy minister of the department of environment, David Akeeagok.

This strategy worked in the past when the Peary caribou population on Bathurst Island increased after a decline.

Laisa Ningiuk, the delegate from Grise Fiord, described July 23 how their HTO established what’s called a “non-quota limitation” — effectively closing down specific areas where no hunting is allowed.

That approach means community planning and restrictions on total allowable harvests are “established by Inuit, for Inuit,” Williams said.

It also protects Inuit harvesters from being prosecuted for offences against animals, Williams said.

He said using elders committees and giving HTOs the power to meet with offenders and using social pressure is another option for punishing offenders.

Delegates split off into sections July 24 to deliberate what works best for which community, and the majority seemed to lean towards the community-based method.

“We hear that the communities really want to take the community based approach, and that’s a very, very good sign and indication that that’s the way forward,” said David Akeeagok.

The HTOs will now head back to their respective communities to talk more about which strategy is best for their communities.

Williams said a report will be made from this week’s caribou workshop, outlining specific ideas to boost populations and manage harvest levels.

The GN will then hold public consultation on strategies in the communities after that, he said.