With 39 per cent of population on welfare, government wants simpler system, more incentives to work 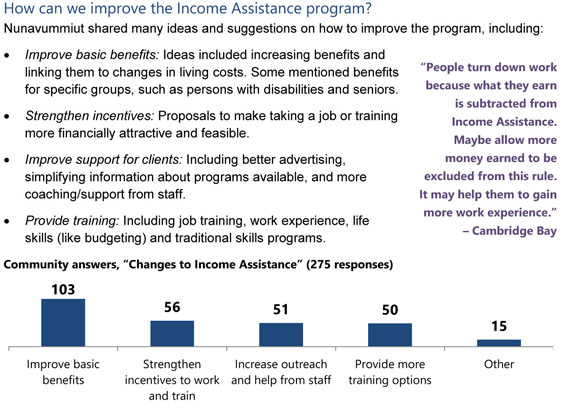 The Government of Nunavut’s welfare, or “income assistance,” system is too complicated and throws up too many barriers that reduce incentives to work or train, a GN report released last week has found.

To fix that, the report, released June 23 and entitled Reducing dependence. Supporting communities, proposes 20 “reforms” for the GN to do on a step-by-step basis starting later this year.

“We use the term ‘proposed reforms’ on purpose. These reforms are not final or set in stone; instead, they set out a path forward while allowing us some flexibility in our approach…,” the document says.

Here are the first four reforms, which will:

• simplify the way the GN calculates income assistance benefits to help people understand how the system works. That’s because, right now, there are different benefits for different needs, such as food, rent or clothing and each one is calculated differently;

These reforms could potentially affect the lives of thousands of Nunavummiut.

• change income assistance rules to let clients keep more of the money they earn each month from working;

• make sure that income assistance is coordinated with other government benefit programs to eliminate gaps and overlaps;

• reduce the penalties for clients who try to work or train but who don’t succeed. “Currently, when a client leaves a job or training, their family’s benefits are suspended entirely for 60 days. For many, this harsh penalty is a strong reason to stay on Income Assistance,” the GN said; and,

• increase the eligibility age for income assistance from 18 to 19 years — this is to give young clients a chance to take skills upgrading, and other activities deemed a “productive choice.”

Before completing the report, the GN’s department of Family Services held its last roundtable on poverty reduction this past December in Cambridge Bay, the fourth such gathering they’ve held since 2014.

Prior to that, in a tour of all Nunavut communities held in the fall of 2015, staff from Family Services and the Department of Economic Development and Transportation surveyed “hundreds” of Nunavut residents, the GN report said.

That produced about 1,400 “ideas and suggestions.”

A compilation of those response show that most people surveyed cited five factors that stop people from leaving income assistance:

• no incentive to work;

• missing life skills, such as budgeting.

And to improve income assistance, most people surveyed made four suggestions, to:

• increase incentives to work or train;

• increase outreach and help from GN staff; and,

The report describes 16 more suggested reforms that including a “coaching” system to help income assistance recipients plan better and move towards independence.

And the report says the ED&T department should do more to encourage job creation and local entrepreneurship, as well as provide more capital to pay for private daycare spaces.

Last, the report says the GN should move towards a fully electronic record system for income assistance, replacing the current system, which is partly manual and partly computerized.

The GN hopes to start working on these reforms this summer, and to make decisions by the fall of 2016.

“On this timeline, Nunavummiut could expect important changes to Income Assistance for the beginning of 2017-18,” the report says.

But throughout the process, the GN said it will stay flexible and adjust its plans in response to public opinion.