“We encourage Canada to address this critical piece of legislation” 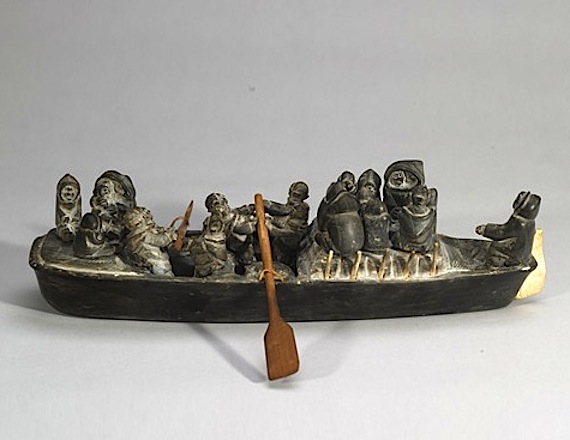 If Canada adopted an artist resale royalty, and also applied it to the descendants of late visual artists, last year’s $88,750 auction sale of this carving showing a migration scene of Inuit in an umiak, made by the late Ennutsiak of Iqaluit in the 1960s, could bring his family $4,437. (FILE PHOTO)

Nunavut’s economic development minister Peter Taptuna wants Inuit artists to gain the right to resale royalties from the resale of their work.

Such an “artist resale right” would give artists a percentage of the resale price fetched by art works like carvings or prints that are resold through auction houses or commercial galleries.

“We add our voice to support artists’ resale right and encourage Canada to address this critical piece of legislation,” Taptuna said March 1 in the Nunavut legislature.

A parliamentary committee is now studying Bill-C 11 to amend Canada’s copyright law. Some groups have suggested that artist resale rights be included in the legislation.

An artist resale right would entitle visual artists like Nunavut’s Pitaloosie Saila, Qavavau Manumie, Paul Maliki, and Nick Sikkuark, or their estates, to a five per cent royalty payment on art resold through an auction house or commercial gallery, Taptuna said.

Last November, two prints by Kenojuak Ashevak sold at auction for a total of $29,620.

“If Canada had an artists’ resale right, she would have received a royalty payment of $1,481,” Taptuna said.

The artist resale right was first introduced in France in 1920. Since then, 59 countries around the world have passed legislation to establish resale royalty rights for visual artists.

“It is time for Canada to recognize the right of Nunavut’s artists to benefit from the resale of their work,” Taptuna said.

But Pat Feheley of the well-known Inuit art gallery,Feheley Fine Arts in Toronto, who has studied the file as a member of the board of the Art Dealers Association of Canada, said there are “many negative aspects to the concept.”

“While it sounds like such a simple idea, it is a very complex issue which has proven already to have a negative effect on art markets in European countries. The art market in Canada is fragile at best,” Feheley said.

Neither the United States (except for California), Canada’s largest international market, nor China, the fastest growing market, have implemented artist resale rights, she said.

This group wants to see the seller of a work of art that has been previously sold, to pay a five per-cent tax on the amount received in payment, whether the work is sold at a loss or not.

The resale right could even be extended to deceased artists.

If the resale right is enacted, there will be lots of costs involved for both the Nunavut and the federal governments, and for businesses, to implement and monitor payments, Feheley said.

“In the case of Nunavut, there are so many struggling artists who have difficulty selling their work on the primary market [directly to private buyers], let alone the secondary market [to galleries]. I would prefer to see a fund that assisted these artists as much as the established artists,” she said.

A position paper on artists’ resale rights from the Art Dealers Association of Canada says this tax would force much of the resale art market to go outside the country or underground.

“Dependent on this fragile market is a group whom it supports: art dealers and gallery staff, framers, shippers, art magazines,” it notes.

“Many younger artists depend on galleries to nurture their reputations and to promote their work by supporting it in the resale market,” the association said. “To do this, gallery owners take on the commercial risk and considerable expense associated with promoting an unknown artist. “

Studies by the British Art Market Federation and the Society of London Art Dealers say many galleries are now less willing to do take a chance on new artists because it involves too much paperwork and brings down any profit on a sale, it notes. “Instead they are opting for selling the work of the less risky, well-established artists.”

Art dealers say the government needs to assess impact of the resale right on “buyers, sellers and intermediaries.”