Nunavut government to auditor general: We’re working on it 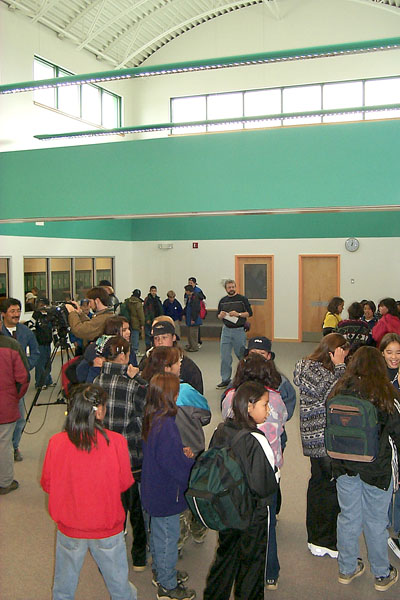 Middle school students in Iqaluit gather for the first day of school. In an audit report released Nov. 19, the Auditor General of Canada has found Nunavut will not create an English-Inuktitut bilingual school system by 2019-20. (FILE PHOTO)

The Government of Nunavut said in a statement Nov. 20 that they’re already acting on two recent reports from the Auditor General of Canada that found embarrassing safety deficiencies in schools and daycare centres and failed implementation of the 2008 Education Act.

“We accept the auditor general’s findings and are working collaboratively to improve how we conduct, report and follow-up on safety inspections in schools and child care facilities,” the GN said in a statement that referred to the AG report on school and daycare fire safety.

GN officials have known about the auditor general’s findings for many months.

That’s because the auditor general’s staff always share advance drafts of their work with affected Nunavut government departments, so that department heads can provide responses for inclusion in the final public versions of auditor general report.

But it wasn’t until Nov. 19 that the public found out the GN does not adequately inspect schools and childcare facilities for fire safety and takes little action on the limited number of inspections that are done.

The auditor general even wrote a letter to the deputy ministers of Education and Community Government and Services this past June warning them of matters that requiring immediate action.

In response, the GN said they have done the following:

• identified “key contacts” at CGS and Education whose job is to respond to inspection requests and reports;

• created a streamlined process for preventative and regular maintenance requests;

• do daycare inspections on a 10-month-cycle so all daycares are inspected annually; and,

• develop a “SAFE schools” strategy that will produce a manual on safety for use by Nunavut schools and daycare centres.

The GN is also doing a review of the Fire Prevention Act, the statement said.

On the education system report, which found the GN will not meet its goal of creating a fully bilingual, English-Inuktitut school system from kindergarten to Grade 12 by 2019-20, the statement said the GN agrees with the auditor general.

“The Department of Education agrees with all the findings of the OAG report on education in Nunavut and will work in partnership with parents and communities to develop a higher quality education system in Nunavut,” the statement said.

To that end, the statement said the GN will:

• work with Nunavut Arctic College to “review of the NTEP program to strengthen the education system by finding ways to increase the number of Inuit language teachers;”

• do a three-year plan “to develop, implement and evaluate differentiated instruction to support inclusive education” — a reference to the internal jargon the GN uses to name the policy the public understands as social promotion; and,

The auditor general found the GN has failed to adequately manage most aspects of implementing the 2008 Education Act — a judgment the GN agrees with.