GN would help if Peterson wishes to look at system failures that led to baby’s death, Okalik says 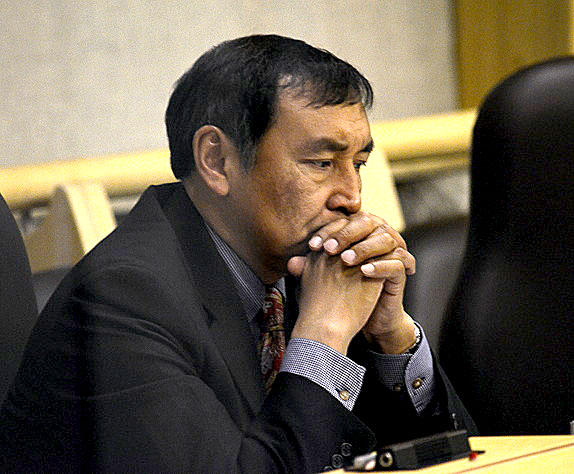 Health Minister Paul Okalik said March 2 in the legislature that if Katherine Peterson wishes to look at health system failures that led up to a three-month-old baby’s death in April 2012, the Nunavut health department would co-operate. (FILE PHOTO)

Nunavut Health Minister Paul Okalik fended off questions in the Legislative Assembly in Iqaluit March 2 about criticisms that lawyer Katherine Peterson’s external review into the 2012 death of a three-month old infant in Cape Dorset is too narrow in scope.

“Concerns have been expressed that the scope of the independent external review into the death of Makibi Timilak is too narrow in that its terms of reference do not seem to allow for a review of the circumstances that led to the tragedy,” the MLA for South Baffin, David Joanasie, told Okalik during question period.

Okalik tabled the terms of reference for the review Feb. 24, more than three months after his predecessor, Monica Ell, announced the Government of Nunavut planned to do the review.

The terms of reference say that the purpose of the review is to look at what steps were taken in the wake of the child’s death, and whether those steps were appropriate.

In answering a question from Joanasie, Okalik left the decision to examine the events preceding the infant’s death up to the lead investigator, Katherine Peterson.

“If they wish to look at any particular aspect surrounding the failure of our health system that led to this death, then [resources] will be made available for review by the independent reviewer,” Okalik said.

“Can the minister indicate if he is open to modifying the formal terms of reference for the independent external review?” Joanasie asked as a follow-up question.

“Any independent process operating outside the purview of this government is outside of our control. However, our office provides the scope of the review and we don’t have much wiggle room,” Okalik replied.

But Okalik found enough “wiggle room” in the review’s scope when fielding questions about the quality of Nunavut’s healthcare system by another MLA on March 2, Isaac Shooyook from Quttiktuq.

Shooyook relayed concerns from a constituent about the quality of health care at his local health centre in the High Arctic.

“Can the minister clearly describe how his department monitors the delivery of health services and measures the quality of care at our community health centres?” Shooyook asked Okalik.

“Last week we announced the need to review operational issues of local health centres throughout Nunavut. Once the review has been completed, I will be looking at ways to make improvements to the provision of health care,” Okalik replied.

Under the heading “Purpose”, the terms of reference document said the review will also focus more generally on current procedures for dealing with complaints of nursing care in Nunavut.

The findings of the review will hopefully lead to “better health care to Nunavummiut and a more responsive system of dealing with complaints regarding healthcare in Nunavut”, the document said.

In response to Shooyook’s questions, Okalik urged Nunavummiut to submit written concerns to the health department.

“There are also many general concerns about the quality of health care delivered by nurses in community health centres all across Nunavut,” Shooyook said.

“Will the minister commit to undertaking a full review of how his department evaluates the quality of health care across all of Nunavut’s community health centres?”

“As per my earlier response,” Okalik said, “we will try to conduct a thorough investigation of the operations of our local health centres as well as the quality of health care provided.”

Ell’s announcement Nov. 6 came after a CBC story alleged the Cape Dorset infant died because a nurse refused to see the baby, contrary to standard community health nurse procedures for sick infants under the age of one year.

That nurse, Debbie McKeown, was promoted after the baby’s death, the CBC story alleged, despite having numerous complaints of harassment filed against her by coworkers stretching back to 2011.

Elise Van Schaik, a former regional health director with the GN, criticized the review’s scope as laid out in the terms of reference for not including the circumstances leading up to Makibi Timilak’s death.

“It’s like investigating half of a case,” Van Schaik said in a Feb. 25 interview.