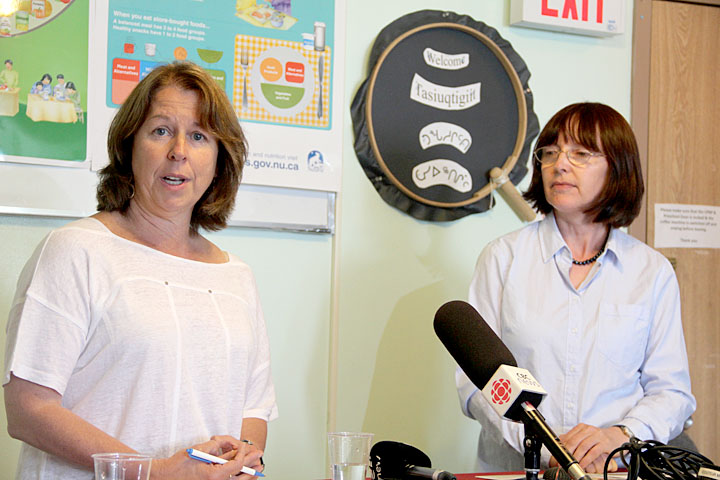 Laura Arbour, a medical geneticist at the University of British Columbia, and Geraldine Osborne, the Nunavut chief medical officer of health, announce the Nutaqqavut “Our Children” health information system, which tracks data from mothers and babies from before birth to age five. (PHOTO BY SAMANTHA DAWSON)

A surveillance system that gathers health information about Nunavut mothers and babies started collecting data last July, and will continue to do so in the future, Geraldine Osborne, Nunavut’s chief medical officer of health, said at a news conference July 24.

The purpose of the Nutaqqavut “Our Children” health information system is to provide information useful for designing future health programs.

The rate of premature births is also higher.

The system collects information from the mother during pre-natal visits, after the child is born, and up to when the child reaches the age of five, when they start going to school.

Social determinants of health such as low income, over-crowding, poor nutrition and the high cost of food will also be recorded in the data.

The database has the potential to improve the health status mothers and children alike by giving health practitioners insight into the links between a mother’s iron levels and an anemic baby, for example, Osborne said.

While healthy children are born in Nunavut “there still are quite a few that this is not the case,” she said.

The plan to get the database up and running started five years ago.

Laura Arbour, a medical geneticist with the University of British Columbia, said the system is based on a model used in B.C. but was done “with a lot of consultation with the people of Nunavut and elsewhere.”

Some places in Canada have used such surveillance systems for more than 20 years.

“There was a lot of catch-up to do,” Arbour said.

The system integrates information from the mother during pregnancy, and her diet, “and extends it right until the baby is born, the size of the baby, all of those determinants right at birth and then right up until five years of age.”

“It’s very important that we get it right from the beginning,” she said.

The Nunavut system is different, because most other database systems stop at one month or one year.

“This is special because this [statistical research] will actually continue within the system until the child goes on to school,” Arbour said, adding, “this period of time sets the stage for the rest of life.”

“This is extremely important that all of this is privacy-protected.”

No individual information can ever be released from the database, but “population level” data will be released.

“This is really about the health of the population and only information put together that would be important for Nunavut would ever be released, and released in a way that is aware of the utmost important of individual confidentiality,” Arbour said.

Nunavut-specific research questions would include food security challenges, and whether or not women have enough healthy food to eat during pregnancy.

“This is particular information only collected because it can make a difference for the population,” she said.

The database will be password protected and only one data-entry employee will be accessing it.

The data will not be used for individual clinical practice and is protected under Nunavut’s privacy legislation.

The system was developed by the Government of Nunavut’s health and social services department, Nunavut Tunngavik Inc., as well as the Qaujigiartiit Health Research Centre.