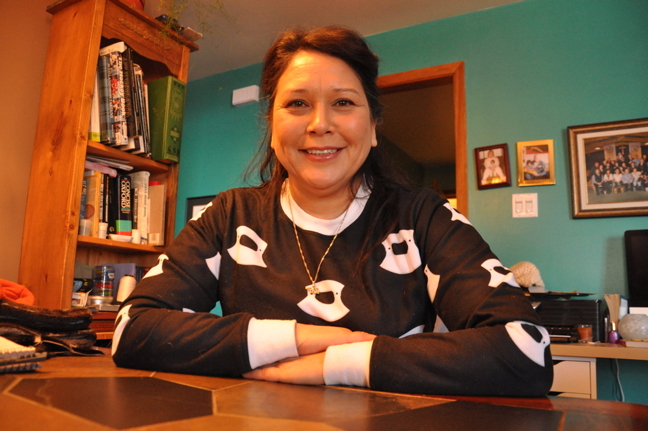 Sheila Lumsden, who says she learned to love cooking by watching her father, prepared a raw fish dish with char and an avocado salad to win her a spot on MasterChef Canada. (PHOTO BY THOMAS ROHNER) 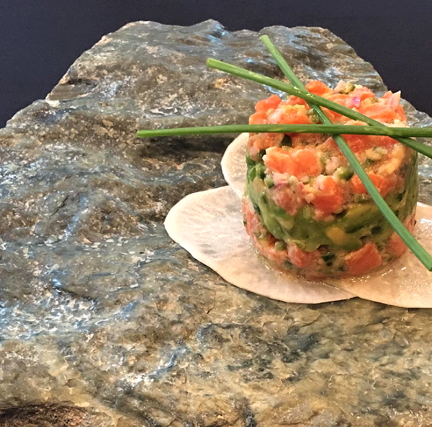 When Iqaluit cook Sheila Lumsden got the call from a Toronto producer last August that she had made the cut for the next season of MasterChef Canada on CTV, Lumsden was left almost speechless.

Her son and her partner were out boating at the time, so Lumsden had nobody she could call to tell about her exciting news, at least not right away.

“I had nobody to bounce it off of, so I was just bouncing around. I wasn’t even scared at that point, I was just so excited,” Lumsden told Nunatsiaq News from her Iqaluit home Feb. 10.

On Feb. 6, CTV announced that Lumsden was among the top 24 contestants for the fourth season of the Canadian edition of the famous MasterChef series.

That means Lumsden will appear on the show when its first episode airs March 2 at 9 p.m.

It also means that Lumsden will get a chance to showcase her Inuit-inspired dishes to the rest of Canada and the world.

The other contestants Lumsden met kept her busy with countless questions about Inuit food because, Lumsden said, they knew nothing about it.

Lumsden’s path to MasterChef Canada began when she submitted an audition video in July 2016.

That video was good enough to get her an invitation to an official audition in Montreal later that summer.

“But I really wanted to pick a dish that was as close to how Inuit traditionally eat quaq (raw meat).”

Before the audition Lumsden began experimenting with ingredients from Iqaluit grocery stores.

But it wasn’t until the day before she arrived in Montreal, when Lumsden was in Ottawa, that she was able to get the special small limes and prepare the dish the way she wanted.

She tried the recipe out on her sister and her father in Ottawa, who gave their stamp of approval.

That approval meant a lot to Lumsden, especially since she remembers learning how to cook while standing on a chair beside the stove where her father prepared dishes ranging from roasts to Canard (duck) à l’Orange.

“That’s where I got my passion for cooking from—by watching my dad.”

With her ceviche, seasoned with cilantro and hazel nut oil, Lumsden prepared an avocado salad as well.

“One of the MasterChef Canada judges is from South America, so I had to make sure it was up to par,” Lumsden said.

The gamble paid off: Lumsden was invited to Toronto for filming in September 2016.

And with the Feb. 6 announcement of the final 24 home cooks from across Canada, Lumsden said she becomes the first Indigenous contestant on the show.

“As an Inuk woman it means the world to me to my aspirations to have a food business here in Iqaluit, but also to inspire other Indigenous women to pursue their dreams because it’s worth it—you don’t know until you try.”

Lumsden said she has had to fight self-doubt at numerous points along this journey.

Lumsden, whose late mother was born in Tuktoyaktuk in Northwest Territories, said she has long planned to open a food business in Iqaluit.

That business would not only focus on inuksiutit (country food) and things like kuanniq (seaweed) and ammumajuq (Arctic clams), but would also help Inuit women learn to cook or feed their families.

“My business would not just be catering, but I’d apply for grant programs to offer cooking classes for Inuit women, and have childcare and taxi chits available for them,” she said.

And, like a similar program in Ottawa, Lumsden would like to offer a food service to families who are too busy to cook so their family can eat nutritious, delicious Inuit-inspired food.

Whenever Lumsden gets overwhelmed with her recent success, she said she thinks about these business plans and feels grounded again in her community and her Inuit identity.

“It’s my way of being an integral part of living and being in Iqaluit. And showcasing what Inuit food could provide for local Iqalungmiut, or people visiting from other communities, or even tourists.”

To view a short biography on Lumsden you can visit the MasterChef Canada website by clicking here.

You can also find Lumsden, and pictures of her dishes, on Twitter and on Instagram by searching her handle: @gunuyung.

The winner of MasterChef Canada will win $100,000 and the title of Canada’s next MasterChef.