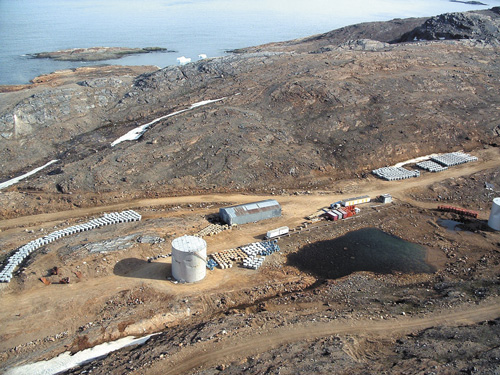 The cleanup camp at Resolution Island during the original remediation employed over 600 workers between 1997 and 2006, and cost an estimated $65 million. The federal government committed to a 25-year plan to monitor the island for additional contaminants after the cleanup concluded. (FILE PHOTO)

The federal government will return to Nunavut’s Resolution Island this summer, after additional contaminated areas at the former military base were identified for remediation, according to project applications filed with the Nunavut Impact Review Board.

The proposed cleanup could take until 2019, the application said, and it comes 12 years after the original $65-million cleanup on the island ended.

High-priority areas mentioned in the application include the removal of contaminated soil and collection and disposal of hazardous debris and waste fuel.

Existing fuel storage systems at the base will also be decommissioned, and road and air strips are scheduled for renovation as the cleanup continues, said a letter included in the NIRB application from Indigenous and Northern Affairs Canada—which has since been split into two new departments.

Resolution Island, which sits southeast of the mouth of Frobisher Bay, off Baffin Island, was the site of military base BAF-5, which was established in 1954 to transmit information from the Distant Early Warning, or “DEW,” Line to military bases in southern Canada and the United States.

The site continues to be used as a short-range radar station by the Department of National Defence, but between 1996 and 2006 a federally funded remediation program brought the base into compliance with the Canadian Environmental Protection Act and Fisheries Act.

BAF-5 was one of 21 DEW Line sites across the Arctic included in that cleanup program, with final costs estimated at over $575 million in 2014.

A 25-year monitoring program has been in place on Resolution Island since the original cleanup ended, and the additional contaminants were identified during a regular survey.

The remains of military bases across the eastern Arctic—which were most active during the Cold War—remain a source of contention over which government, or level of government, is responsible for the cleanup of contaminated debris.

That debris can include toxic petroleum hydrocarbons, polychlorinated biphenyls, or PCBs, and pesticides.

Last year, Transport Canada announced it would pay $4.5 million for the cleanup of an old military dump outside Iqaluit at the Sylvia Grinnell Park Territorial Park. This is part of an agreement to clean up areas around the city’s airstrip left over from its operation as a U.S. base during the Second World War and into the 1960s.

Other waste areas around Iqaluit that have yet to be remediated are in West 40, Federal Road, Apex, Upper Base and Lower Base.

And debate continues over the cleanup of abandoned U.S. airbases in Greenland between the U.S. and Denmark, over which state will pay for the removal of radioactive runoff and other dangerous contaminants that threaten to leak into the environment.