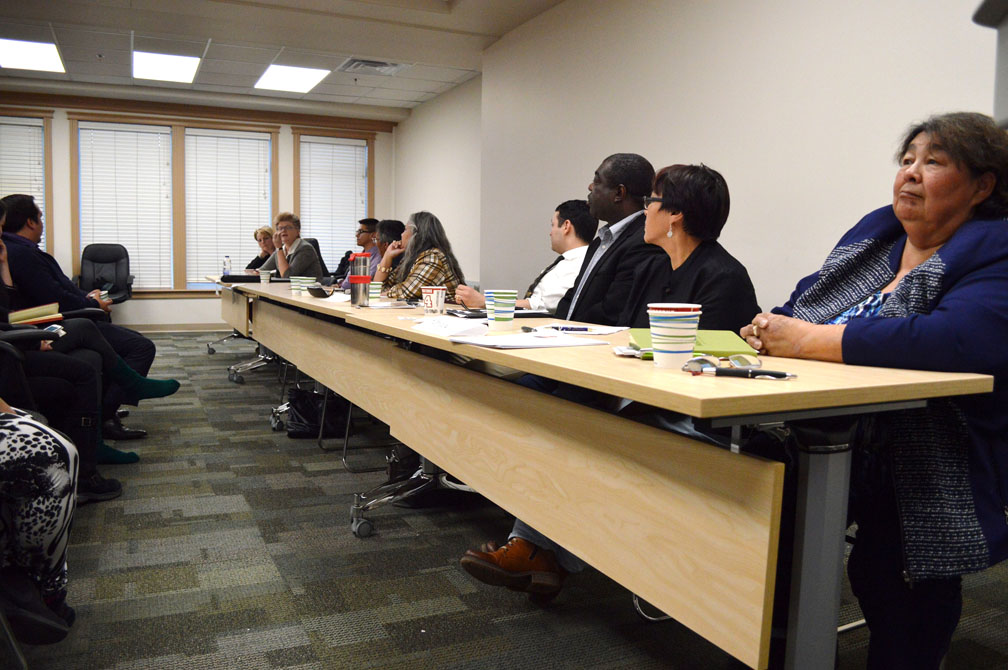 Candidates contesting Iqaluit’s four constituencies field questions from Nunavut Arctic College students in a forum organized by the Nunavut Student Association. Iqaluit-Tasiluk’s incumbent, Nunavut Health Minister George Hickes, had to attend a meeting of territorial and provincial health ministers in Edmonton, while the Iqaluit-Sinaa incumbent, Paul Okalik did not attend either, along with two other candidates in that riding, Cindy Rennie and Adamee Itorcheak. Two other incumbents, Monica Ell-Kanayuk and Pat Angnakak, did appear at the event. (PHOTO BY STEVE DUCHARME)

“We’re going to be able to evaluate, as lawyers, to say, ‘Remember what you said to us on our first month of law school?’”

The forum did not include a back-and-forth debate among candidates, but was structured to give candidates five minutes to talk about their campaigns.

That was followed by another two minutes each to respond to questions drafted in advance by the law students, and chosen randomly.

Iqaluit-Tasiluk’s incumbent, George Hickes, was attending a meeting of territorial and provincial health ministers in Edmonton as Nunavut’s current minister of health, and was unable to make it to the forum.

The Iqaluit-Sinaa incumbent, lawyer Paul Okalik, missed the forum, after telling the students he would attend, Mullin told Nunatsiaq News.

Okalik said later he’d been given an incorrect start time but when contacted, organizers said all candidates were told the event began at 3:30 on Oct. 19 so they chalk up the absence to miscommunication.

The strictly-monitored format largely kept candidates on topic, as they fielded questions on issues such as the relevance of Inuit Qaujimajatuqangit, addictions treatment, child support, language revitalization and tourism.

Iqaluit-Niaqunnguu candidates Pat Angnakak, Anne Crawford and Franco Buscemi each took turns talking about solutions to elder care, after one law student said that witnessing the lack of support for unilingual elders at the Embassy West Senior Living care home in Ottawa was “traumatic” for visitors.

Crawford slammed Nunavut’s outgoing administration and MLAs for “betraying the people” on elder care, which she said in its current form was ripping families apart and putting some of Nunavut’s most vulnerable people in “life sentences of isolation” in southern facilities.

The government could improve senior care by using its contracts as leverage, Crawford suggested, but added that money should not be a factor in the territory’s obligation to its elders.

Angnakak also bemoaned the current funding for elder care and referred to her work outside the legislature as a founding board member for the Sailivik Society, an association proposing to build a 72-bed elders care facility in Iqaluit.

Buscemi admitted he wasn’t aware of the Embassy West Senior Living home, but agreed that the government should pressure its contractors to provide better services or revisit its relationship.

Another issue was the effectiveness of FANS, the Financial Assistance for Nunavut Students funding program.

Iqaluit-Manirajak candidate Adam Arreak Lightstone said amounts of student funding should be allocated on a case-by-case basis, as the financial needs of students studying in Nunavut or in the South can vary widely.

“A student has a right to be educated where they want to be educated,” added Ell-Kanayuk, who also said tuition down payments required from some students before they are eligible to apply for FANS is unfair.

Okalik Eegeesiak, a candidate for Iqaluit-Manirajak, said strong sales from Iqaluit’s newly opened beer and wine store should be funneled into a treatment centre and holistic programs, but said Inuit communities also need more equitable funding from the federal government.

Jude Lewis, also running in Iqaluit-Manirajak, came out strongly in support of better screening and programing for students with learning disabilities in Nunavut’s public school system.

And Iqaluit-Tasiluk candidate Jacopoosie Peter said more Inuktitut language programming needs to be made available for all Nunavummiut, which he said “will enrich everyone.”

“Inuktitut and the land are so connected,” he said.

Prior to the territorial elections, Iqaluit candidates will meet again at the city’s Francophone Association Centre for a moderated debate, Oct. 25.