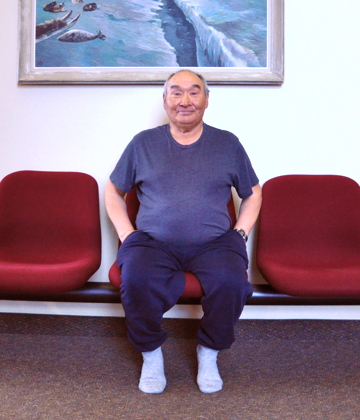 Final arguments in the trial of former Sanikiluaq teacher, Johnny Meeko, are expected to wrap up this week before Justice Neil Sharkey in the Nunavut Court of Justice in Iqaluit. (FILE PHOTO)

Did Johnny Meeko, the 61-year-old former Sanikiluaq teacher, sexually abuse former students and thereby abuse his role as a community leader while teaching at Nuiyak Elementary School between 1972 and 2007?

“That’s a question that we say can never be answered by this court,” Meeko’s defence lawyer James Morton said in his closing submissions to Justice Neil Sharkey at the Nunavut Court of Justice in Iqaluit Dec. 8.

But the stories of those who say Meeko did — eight female complainants and one male complainant who testified at Meeko’s trial in late August — are unreliable, and, in one case, impossible, Morton said.

And Sanikiluaq police, after arresting Meeko in August 2012, pressured the former teacher into admitting to some of those crimes in a recorded statement played during Meeko’s trial, Morton argued before Sharkey.

During Meeko’s eight-day trial, similarities emerged from the testimony of the nine witnesses.

Most of the complainants were female, many of them had Meeko as a Grade 3 teacher over a span of several years and most testified that he would grab or pinch their chests, telling them it would help their breasts grow bigger. They also said he would ask personal questions about their pubic hair and genitals.

One witness, however, alleged Meeko raped her five times — three times in the furnace room as a student, once out on the land and once in her own home.

That’s because the first incident of rape she alleged occurred before the birth of her son, during a time when Meeko was absent from the community, Morton pointed out.

And that witness changed her story between the preliminary investigation and the trial when she learned Meeko wasn’t in town when she said he raped her.

This witness isn’t credible, Morton said, and none of her allegations should be believed.

The rest of the witnesses are credible, Morton conceded, but are simply unreliable, in large part because their testimonies are tainted by gossip, the prospect of financial compensation for alleged suffering and by their failing memories.

“At this distance in time, you cannot find to the criminal standard what actually did happen,” Morton said, adding these eight witnesses did their best to tell the truth but Sharkey shouldn’t believe them either.

Two other recurring details in trial testimony should also raise a reasonable doubt about the charges facing his client, Morton argued.

First, some witnesses testified to being touched hundreds of times in a public setting — either out in the community or in Meeko’s classroom in front of other students where someone could have walked in at any time.

And secondly, other witnesses testified to being abused, in contrast, in private settings with nobody around.

“The difference is so striking as to draw into question the reliability of any of the evidence,” Morton said.

Finally, Meeko, a religious man who called the RCMP the “fist of God” at trial, merely told police what they wanted to hear when he admitted to some of the allegations and rumours in Sanikiluaq at the time of his arrest.

“The fear of Qallunaat, the sense that one must obey, the colonial overhang — those are all very real. Finding ways to please the RCMP, we say, include agreeing with what was a widespread and evolving story of child abuse,” Morton said.

The judge said, for example, that it’s entirely plausible that a sexual predator would abuse children both in public and in private.

And the number of touchings is a relatively minor detail, understandably confused by complainants looking back a couple of decades from trial.

The real “colonial overhang,” Sharkey said, could cut both ways: Meeko may have wanted to please the RCMP by telling the truth.

Meeko sat beside his defence lawyer in a grey t-shirt and blue sweat pants throughout Morton’s closing submissions.

At one point Meeko stood up to pour water into a plastic cup for his wife, who was sitting behind Meeko in the court gallery.