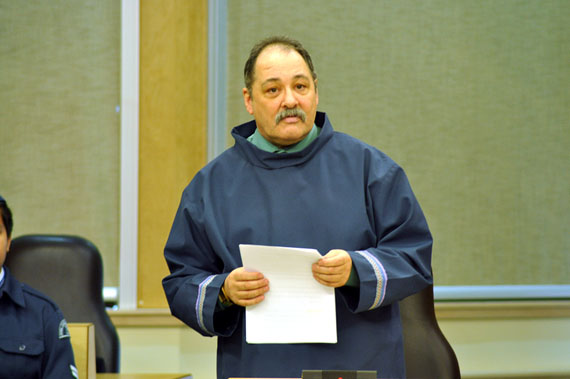 Even though trucked sewage service has been restored for residents of Pond Inlet, the north Baffin community is in critical need of help to clean up recent problems caused by faulty water and sewage services, Tununiq MLA Joe Enook said at the Nunavut legislative assembly’s opening day, Feb. 24

“Some of the houses had sewage overflow, and the sewage was pouring out onto the land around the houses all over the place,” Enook told Tom Sammurtok, the minister of Community and Government Services, during question period.

“Our community is in a critical need of help for the clean-up.”

Hamlet officials declared a state of emergency Feb. 10 after finding themselves down to only one operating sewage truck for the community of about 1,500 people.

That left some houses with sewage overflow, and some without running water because once a sewage tank is full, the water shuts off.

The Government of Nunavut sent a mechanic to assess the broken-down sewage trucks on Feb. 11, and by Feb. 17 two trucks were back on the road.

Darren Flynn, assistant deputy minister of the CGS department, told Nunatsiaq News Feb. 19 that services have been restored to all residents.

“At one point, there were 54 units dealing with issues of [sewage] overflow,” Flynn said.

But Enook asked what else CGS can do to help the community.

“I’d like to ask the minister this: how else, either through funding or resources or workers coming in, how else is your department going to be helping Pond Inlet with this matter?” Enook said.

Sammurtok said CGS will work with the Nunavut Housing Corporation and the GN’s health and environment departments.

“We know that we’re going to need to do more work in the spring when it’s warmer out, and we’re planning that,” Sammurtok said.

Enook also wondered how long it took for CGS to respond to the community’s sewage truck problems.

“When was the first time your department heard about the critical situation about the lack of water delivery and sewage pump outs?” Enook asked Sammurtok.

“The very first time that we heard there was a problem was on Dec. 24, 2014, about the sewage truck problems… and during the Christmas period, we heard about this,” Sammurtok said.

“When your department was notified for the very first time, before they said they were in an emergency situation… what was the first step your department did to help the people of Pond Inlet?” Enook asked in his final supplemental question.

“In January, in the new year… we helped the hamlet bring in the parts for the vehicle,” Sammurtok said.

Enook did not ask why, if CGS had helped the community acquire parts for the vehicle in January, the community was down to one operating truck by the first week of February.

Pond Inlet has been advertising to fill a certified mechanic job for months but has been so far unable to fill the post.

During his member’s statement, Enook thanked the GN for helping the community.

But he said he is worried that old equipment and infrastructure could put Pond Inlet — and other Nunavut communities — into dire straits in the future.

“I would like to encourage the government…to work with our community to have a long term plan to make sure our community infrastructure is new so that this won’t be experienced by other communities in Nunavut,” Enook said.

On Feb. 19 CGS said two more sewage trucks are under repair and should be operating in Pond Inlet by the end of this week.

Until that time, the community was to have remained under a state of emergency.