Nunavut man describes being dragged and mauled by polar bear 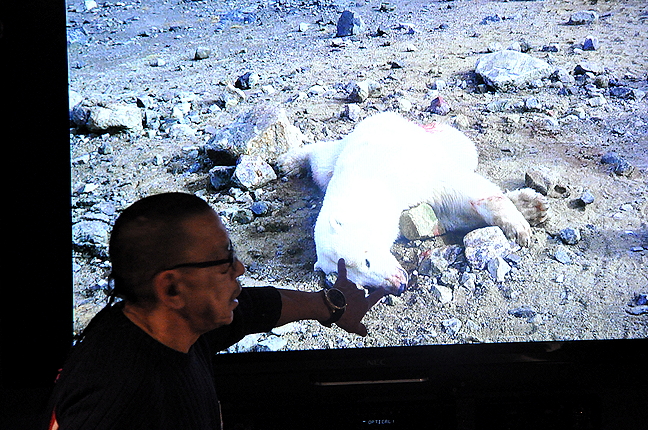 Here’s the mighty culprit: Kootoo Shaw describes how a cook in the camp got a gun and shot the bear that attacked him outside of Kimmirut in 2003. (PHOTO BY THOMAS ROHNER) 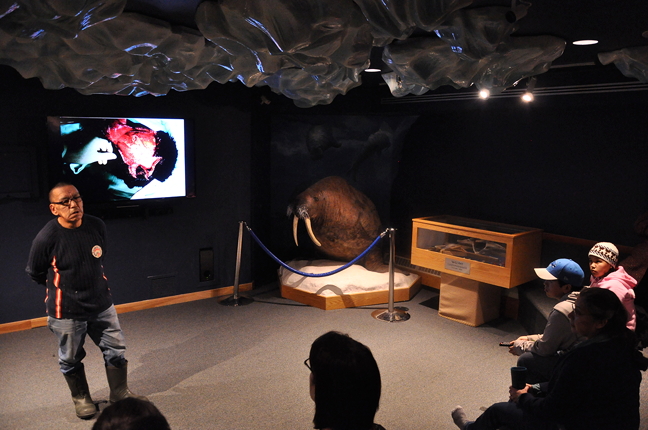 Kootoo Shaw shows an audience at the Unikkaarvik Visitors Centre in Iqaluit Jan. 12 what his skull looked like with the skin peeled off. (PHOTO BY THOMAS ROHNER)

Warning: this story contains graphic content which may upset some readers.

Kootoo Shaw was wearing nothing but long johns and a T-shirt when a 400-pound polar bear dragged him by his toes along the tundra towards the ocean outside Kimmirut in September 2003.

Shaw, 46, was working as a guide on a sport-hunting trip when the attack occurred in the early morning.

“My captain was running four steps ahead of me, I looked back and the polar bear was three steps behind me. And then I tripped on a rock, it was just a small rock, this big,” Shaw said Jan. 12 at the Unikkaarvik Visitors Centre in Iqaluit, showing with his hands a baseball-sized rock.

Shaw kicked off the centre’s 2016 guest speaker series Jan. 12 by regaling the audience of 50 with his story of narrowly escaping the jaws of a four- or five-year-old male polar bear.

“I thought I am going to leave my kids behind,” Shaw said of the attack, which left his scalp peeled back from the skull and his back riddled with scratches, gouges and a gaping two-inch hole.

Shaw, who looked to be about five feet four inches tall, said he was sleeping in a tent with his captain when the pair woke to find the bear inside their tent.

“That was the scariest thing. It looked like our tent was full of snow — so much white fur everywhere.”

Shaw scrambled for a knife to defend himself but couldn’t find one in the tent.

The captain was the first to flee the tent and Shaw said he was quick to follow.

If only he hadn’t tripped on that rock.

After dragging Shaw a few feet, the polar bear stopped, put his back paw on Shaw’s back, and then fit Shaw’s head between his fangs.

The group’s cook then grabbed a gun that belonged to one of the American sport hunters on the trip and shot the bear twice, killing the animal.

He remembers crawling away from the bear. He remembers asking for a smoke. And he remembers the crew telling him they could see smoke from the cigarette escaping through a large wound in his back.

Shaw remained conscious for the one-hour canoe trip back to Kimmirut, his head wrapped in a towel to slow the bleeding.

“I remember [the crew] getting me out of the boat, they panicked and hit my head on the boat,” Shaw said as the audience groaned.

Once at the Kimmirut health centre, the towel was painfully removed from Shaw’s head, partly stuck to the drying blood.

“My brother-in-law was there and when he saw that, he went down like a telephone pole,” Shaw said.

Three handfuls of sand were removed from the blood-clotted area around his skull; Shaw said the sand may have saved his life by slowing down the bleeding.

He was then medevaced to Iqaluit where he underwent 13 hours of surgery.

“Whenever I go back to the hospital, some nurses and doctors still call me ‘polar bear man.’ Or if I’m back in Kimmirut, where I lived for 20-odd years, people say, ‘hello, polar bear man!’ I don’t mind that they call me that.”

At the time of the attack, the local hunters and trappers organization didn’t allow Inuit guides to bring their own guns when they were guiding, Shaw said.

But because of his brush with death, that’s changed, he added.

Shaw has three scars on his head as a result of the attack and he said he still has nightmares about it sometimes.

“Sometimes in bed I yell at my woman, ‘Get out of here polar bear! Get off me!’” he joked.

“But I love her and she loves me.”