Nunavut man sentenced to life in prison for murder 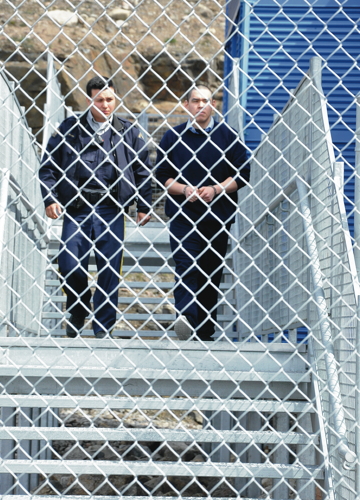 Peter Kingwatsiak, above, has been sentenced to life in prison for killing is brother-in-law Mappaluk Adla. His lawyer says Kingwatsiak is appealing the conviction. (FILE PHOTO)

Peter Kingwatsiak, convicted earlier this year of killing Mappaluk Adla, has been sentenced to life in prison.

But he is now in the process of appealing his conviction.

The sentencing hearing, held in Cape Dorset’s community hall, was mostly a formality, since a conviction for first-degree murder carries an automatic life sentence.

Justice Bonnie Tulloch delivered the sentence June 17 to Kingwatsiak and about 20 people, including the mother of the victim, who had gathered in the hall.

“Justice Tulloch said it was the hardest case she ever decided, and that was because of the impact of the sentence,” Morton said from Rankin Inlet while on circuit court duty.

But Morton said Kingwatsiak has decided to appeal his conviction, partly on the grounds that he should have been convicted of manslaughter instead of murder.

During his one-week trial in June 2015, Kingwatsiak admitted to shooting his step-brother Adla, 23 at the time of his death, at point-blank range in the forehead in Cape Dorset in September 2010.

Kingwatsiak had just turned 18 about a week before the shooting.

During his judge-alone trial, Tulloch heard testimony that Kingwatsiak was overcome with jealousy towards Adla for pursuing Kingwatsiak’s ex-girlfriend.

Since Kingwatsiak admitted to killing Adla before the trial began, the main question at trial was whether Kingwatsiak could form the intent necessary to be convicted of murder.

Morton argued that Kingwatsiak could not form that intent because the accused was blacking out from inhaling gas fumes and because of his extreme emotional state.

But Tulloch agreed with Crown prosecutors that Kingwatsiak, who told numerous people he intended to kill Adla in the days leading up to Adla’s death, planned and carried out the shooting.

That conviction will be appealed though, Morton said June 20.

At the sentencing appearance in Cape Dorset June 17, Kingwatsiak spoke “for a considerable period” after being sentenced, Morton said.

“It was quite emotional. He expressed remorse, sorrow and spoke about the need for forgiveness… It was lengthy but my sense was that it was well received by the family.”

But time served does count toward parole eligibility and Kingwatsiak has been in custody since September 2010, the lawyer explained.

According to the so-called “faint hope” clause, Kingwatsiak can ask for a review of his parole ineligibility 15 years into his life sentence.

A judge must approve the review, then a local jury must unanimously agree to reduce the period of parole ineligibility from 25 to 15 years.

An application can be made to a local jury for early release, but in first-degree murder cases, Morton said, early parole is “extremely rare.”

Morton said Kingwatsiak will likely be sent to Ontario shortly for classification before being placed in a southern maximum security federal facility.

There is currently no maximum security prison in Nunavut.