Other NAM resolutions include hotel tax and waste management planning 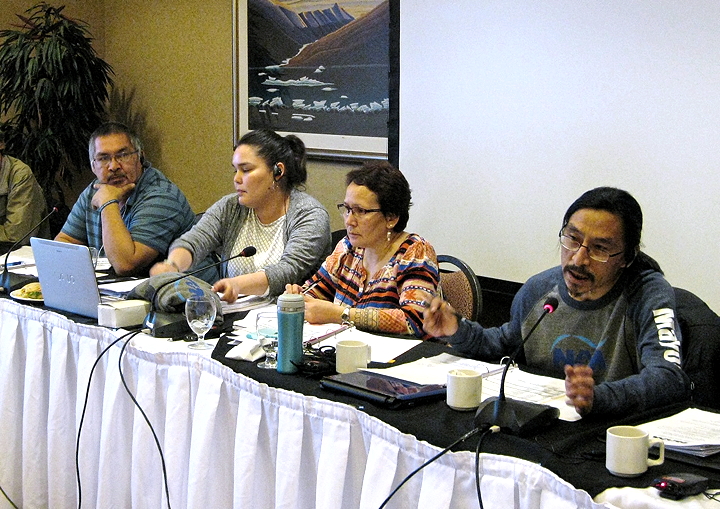 Jeannie Ehaloak, mayor of Cambridge Bay, second from right, chairs the Nunavut Association of Municipalities’ annual general meeting in Iqaluit, Nov. 12, as treasurer and mayor of Igloolik, Peter Ivalu, right, asks a question about Nunavut infrastructure. Nunavut mayors passed 13 resolutions during their meeting this year including a unanimous motion to back Clyde River’s fight against seismic testing for oil and gas. (PHOTO BY PETER VARGA)

Mayors of Nunavut’s 25 communities are backing Clyde River in its fight against seismic testing for oil and gas in Baffin Bay and Davis Strait, and have called on the governments of Canada and Nunavut to “respect this community and its concerns over marine development.”

The mayors expressed their support unanimously by way of a resolution passed at the Nunavut Association of Municipalities’ annual general meeting in Iqaluit, Nov. 12 to Nov.13.

The resolution tops a list of 13 resolutions passed at the conclusion of the two-day conference which mostly centred on chronic challenges Nunavut communities face managing solid waste and waste water, and dealing with infrastructure deficits.

NAM delegates don’t normally pass resolutions “specific to one community,” she said, “because bylaws in NAM policy state any resolution passed has to be Nunavut-wide, and Nunavut-inclusive.”

“We have to speak as one voice, for all,” she said.

The Clyde River resolution, in fact, does conform to bylaws “because we recognized what they were going through could happen to any other community at some point,” d’Argencourt said.

The resolution acknowledges the Hamlet of Clyde River and the community’s hunters and trappers organization “have initiated legal action in June 2014 to protect the marine life of Baffin Bay and Davis Strait.”

It adds that “all communities in Nunavut have a continuing concern for the protection of their wildlife resources, including marine mammals, and concern that marine development, if necessary, be consultative and beneficial to the people of our communities.”

The mayors of Nunavut, constituted as the Nunavut Association of Municipalities, express “our whole-hearted support for the actions taken by Clyde River, and encourage Nunavut and Canada to respect this community and its concerns over marine development,” the resolution reads.

The NAM “asks Canada and Nunavut to negotiate the terms of any development in the region with the affected communities, who have the greatest interest in the lands and waters near our communities,” the motion concludes.

The association also promised to contribute a portion of funds raised from the annual meeting’s silent auction, amounting to about $1,200, to Clyde River’s efforts to appeal the National Energy Board’s approval of the project.

Described as “symbolic,” the donation is not part of the resolution. It could, at best, contribute to potential airfare costs for the mayor of Clyde River, Jerry Natanine, when he travels to represent his community’s interests in the seismic issue, d’Argencourt said.

Other resolutions passed at the annual meeting centred on infrastructure concerns. They lead off with the second motion – which calls for the creation of a hotel tax “to support infrastructure development.”

Also described as a “room tax,” the levy would be included in charges to guests. The resolution calls on NAM to work with Nunavut’s department of community and government services “to investigate and advance amendments to the [territory’s] Cities, Towns and Villages Act and the Hamlets Act” which could permit municipalities to create and collect a hotel tax.

The second motion doesn’t specify the types of infrastructure that needs funding. It adds that “recreation and transportation” could also be funded by a hotel tax, identifying “ports and breakwaters” under transportation.

Three resolutions refer to actions to improve solid waste and water waste management in the communities, which surfaced as an issue of top concern during a ministerial panel and sessions on “infrastructure status” in day one of annual conference.

Roy Green, deputy minister of community and government services, was on hand to answer mayors’ questions about municipal waste plans. He told NAM delegates that no fewer than 21 communities are due to set up new garbage dumps and waste sites, and 17 of Nunavut’s municipalities are not in compliance with current waste water regulations.

The resolutions on waste management include:

• support for a territory-wide plan to ship hazardous, bulk and recyclable waste out of the territory, known as the “territorial backhaul program.” The resolution singles out the need to separate hazardous waste in order to comply with water licenses; and,

• a call for the GN to create a “license, tax or policy” on all vehicles that enter the territory, which would fund the removal of junked and derelict vehicles out of Nunavut.

Jeannie Ehaloak, mayor of Cambridge Bay and president of NAM, commented at the meeting that Nunavut’s municipalities can’t manage their waste sites without territorial and federal government help, for three reasons.

“We don’t have a lot of money within the municipalities to ensure that our waste management programs are up to date,” she said.

“Hopefully, if we keep lobbying the territorial and federal government, they’ll hear us and help,” she said, “so we can address those issues.”