Pauktuutit, UBC, team up to document impacts of Meadowbank mine on women and families 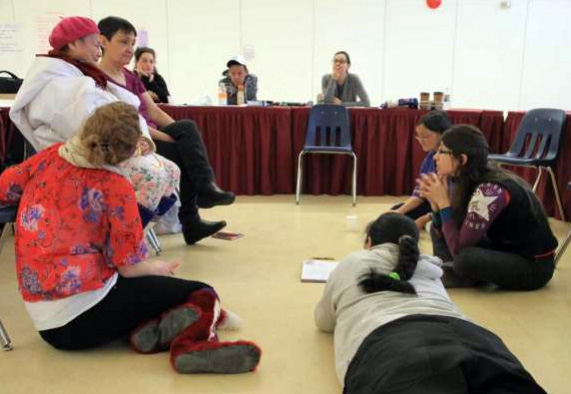 Baker Lake women took part in a focus group in February 2013 on the impacts of mining on their community. (PHOTO COURTESY OF PAUKTUUTIT)

A new report prepared by Pauktuutit Inuit Women of Canada and researchers at the University of British Columbia paints a troubling portrait of the effects of mining on Inuit women in Baker Lake, a community of 1,700 located 110 kilometres from Agnico Eagle’s Meadowbank gold mine.

The women told Pauktuutit that, due to the mine, they face discrimination, substance abuse, violence and a break-down in family relationships.

And their words couldn’t be more timely considering the push from industry and multiple levels of government to see more mines built and more Inuit trained and working: the report serves as both a snapshot and a warning.

The report, titled The Impact of resource extraction on Inuit women and families in Qamani’tuaq, highlights a number of positive spin-offs which Baker Lake has seen since Agnico Eagle’s Meadowbank gold mine began operating in 2010: an increase in material wealth, more women in the workforce, and a better understanding of how the mining industry works.

But, as one woman quoted in the study suggested, “there are blessings given to us from the mine and yet a mixture of… misfortunes.”

In Baker Lake, “misfortune” includes an increase in alcohol and drug use — purchased by mine employees with their new disposable income — strains on couples and parent-child relationships as well as a bump in domestic abuse.

And for Baker Lake women who work in mine, the report contains anecdotes alleging sexual harassment and even rape.

These varied issues were first raised by Inuit women during a workshop on resource extraction that Pauktuutit attended in 2012. One concern came across loud and clear: Inuit women feel they don’t have a voice in guiding the mining projects popping up in their territories.

So Pauktuutit set about to change that.

Nadia Aaruaq now works as a community researcher for Pauktuutit in Baker Lake. She gathers perspectives from local women about the impacts of Meadowbank, which has a total workforce of about 550.

Some women — like Aaruaq — have worked at Meadowbank, others have husbands or family members who do, but all say they have been affected by the mine since it began operations in 2010.

“I have to comfort a lot of the women I interview because many of them are in tears,” Aaruaq said. “They talk about how much has changed since the mine opened.”

Aaruaq got involved with the research project last year through a one-week workshop and focus group organized by UBC’s department of social work in 2013 to hear the perspectives of more than a dozen local Inuit women and to train them to do their own local research.

Aaruaq perhaps typifies the experience of women working for Meadowbank.

She was first hired as a janitor there, but left after a short time because she found it difficult to be away from her infant daughter for two weeks at a time.

A single mother, Aaruaq returned to the mine some time later as a housekeeper, where she worked alone cleaning rooms for the mine’s mostly male staff, an experience which she described as “kind of creepy.”

Another Baker Lake woman mentions the “undignified behaviour” shown towards female Inuit employees by some male staff at the mine .

“The names that women are being called and the expectations. Yeah, we’ve heard a lot about that. The women are afraid to take it to the human rights because they’re going to lose their jobs, and that’s a pretty powerful obstacle,” offered one participant.

“We’ve had a number of women coming in and telling us about rapes. There were rapes. I mean they weren’t just somebody who changed their mind, it was somebody who was actually raped up there.”

The report does not indicate whether those incidents were ever reported to authorities.

As of December 2012, the Inuit workforce represented about 25 per cent of workers at Meadowbank and of those, nearly half were women.

A growing number of women are working and being trained in truck haul operation, the report noted, although the majority work in laundry rooms and kitchens or in housekeeping, which is where many female staff report they face harassment and unpleasant work conditions.

“Some of the guys pee in pop cans and water bottles… even in the garbage cans,” one Meadowbank employee said at the workshop. “…I’m not picking those up. Even if I get paid to. More than once I refused to go in some of the rooms.”

“Semen,” said another employee. “Like in the sink… or in garbage cans, or in the shower… they’re worse than kids.”

Community feedback suggests women are dealing with these issues privately rather than reporting them to supervisors or even police, said Karina Czyzewski, a UBC researcher who helped prepare the report.

“They didn’t really feel like there was a process for voicing those things at the mine,” Czyzewski said. “If someone gets caught with drugs in their workplace, that process is clear, but it’s much less clear in the case of harassment.”

From mine site to home life

The report found that troubles at the mine find their way into the home life of Baker Lake residents.

Most of the women who participated in the research said salaries from the mine have spurred an influx of alcohol and drugs in the community. Permits issued for the import of alcohol more than doubled to 6,105 in 2011, up from 3,000 in 2009, RCMP report.

“This past Christmas it was, it was pretty bad,” noted one women. “People were paying up to a thousand dollars for a forty ounce bottle of booze.”

Many women also reported the strain on family relationships caused by the two-week-on, two-week-off work schedule at Meadowbank, which they say creates jealousies at home.

“Someone who is jealous or suspicious of the behaviour of a partner while away at the mine, or left alone in the community, and who now has the resources to purchase alcohol or drugs, is at risk of taking his or her (most often ‘his’) feelings out on his partner once he gets home for a two-week period,” the report said.

“The increase in incident files and our discussions with RCMP in [Baker Lake], suggest that this is a far too common scenario.”

Women in the workforce

The presence of the mine has also had a number of positive impacts on Inuit women in Baker Lake and throughout the Kivalliq region of Nunavut, women noted; women’s confidence and ambition are growing.

One social service worker observed: “There’s more women working… so I found that it’s really given some women a chance to, to get a good job and to provide for their family. And I’ve also seen a lot of young people who haven’t been able to get jobs anywhere are also working.”

Other participants said the material wealth in the community is plain to see: new all-terrain vehicles, snowmobiles, trucks, and children looking better dressed.

The problem, women noted, is that affluence is not distributed equally.

The majority of women whose input was gathered in the report said they wanted to see more benefits for the whole community rather than for certain individuals.

As part of the Inuit impact and benefit agreement between the mine’s owners, Agnico Eagle and the Kivalliq Inuit Association, a Community Economic Development Fund was created to fund sustainable alternatives to mine employment.

To date, no application process to access these funds has been created and no funds have been spent, though the mine is about halfway through its expected life.

“There is money that is supposed to be going to the community to put these services in place, but we haven’t see that,” Czyzewski said. “And there are lots of questions about why that hasn’t happened.”

One of the report’s recommendations is that the Kivalliq Inuit Association put the community development fund in place as soon as possible, guaranteeing that women are involved in the process.

And Aaruaq hopes this report will help shed light on how women can get involved and have an impact.

“I’m hoping that women can be at ease with the mine and what’s been going on,” Aaruaq said. “For the community, I’m hoping to see more programs and activities for both youth and elders.”

As a community researcher, Aaruaq continues to gather interviews from women in her community, which will help paint a broader picture of how mining continues to shape Nunavut’s only inland community.