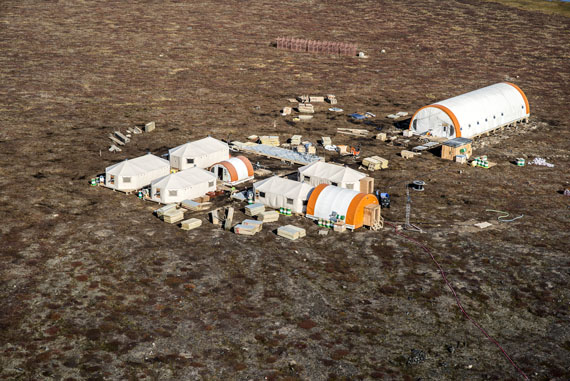 “This rapidly growing deposit remains a focus for the company given its economic potential, partly due to its close proximity to Agnico Eagle’s nearby Meadowbank mine and mill,” the company said in a news release.

The company said in June that drill teams had continued to find high-grade samples at its new Amaruq site that “exceed our expectations.”

Right now, the Meadowbank mine and mill, which started up in 2010 to become Agnico Eagle’s biggest gold producer, is expected to churn out gold bars until the third quarter of 2018.

But there’s now a possibility that an operation at Amaruq, about 50 kilometres from the existing mine and mill, could extend Meadowbank’s lifespan beyond that date.

At the same time, the company cautions that any future exploration expenditures and any future decision to develop Amaruq beyond 2015 are subject to the approval of its board of directors

But the company is still preparing for a potential future application to submit to regulators for an operation at Amaruq.

“Engineering and environmental baseline studies are underway to support the permitting process for Amaruq as a potential satellite open pit to the Meadowbank mine,” AEM said.

And early this year, they applied to Nunavut regulators for permission to build an all-weather access road between Meadowbank and the Amaruq deposit.

“While it is still at an early stage of exploration, in less than two years, the Amaruq property has advanced from a grassroots discovery to a project that now hosts a significant and growing inferred gold resource,” Sean Boyd, Agnico Eagle’s CEO, said in the news release.

Phase one of Agnico Eagle’s exploration work at Amaruq, which ended this past June 30, resulted in an inferred estimate that’s 35 per cent higher than the last one.

They estimate the Amaruq property now likely holds two million ounces of gold, within an ore body of about 9.7 million tonnes with an average grade of 6.47 grams per tonne.

Most of that is based on work at a promising deposit on the Amaruq property called Whale Tail.

“The updated resource estimate demonstrates that the Whale Tail deposit appears amenable to open pit mining, and there is potential for a higher grade underground operation,” Boyd said.

And they hope that more exploration work in and around the area will expand their estimate.

“We also see good potential to expand the known deposits and discover new areas of mineralization on the property,” Boyd said.

An “inferred” resource estimate suggests the potential for a commercial deposit — with a relatively low level of confidence — but does not necessarily guarantee the existence of a viable commercial operation.

Amaruq covers 114,761 hectares of Inuit-owned and Crown land, about 50 km northwest of Meadowbank. Right now, Meadowbank produces more than 400,000 ounces of gold per year and employs about 700 people.

Agnico Eagle hopes to update their mineral resource estimate at Whale Tail by the end of this year and report the results by mid-February 2016.