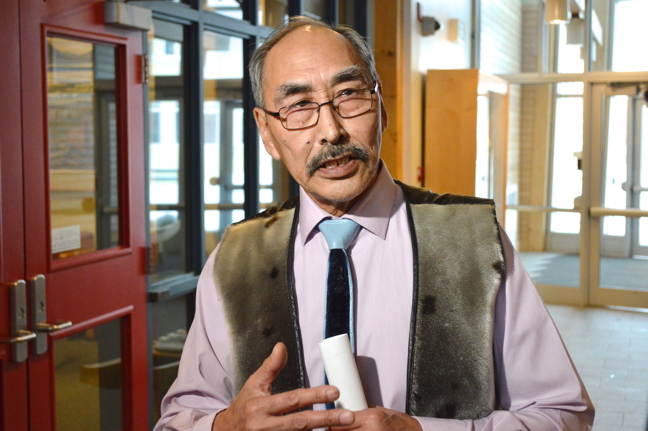 House Leader, and Nunavut Education Minister, Paul Quassa says his government made reforming the Education Act a cornerstone of their mandate and he hopes they can do that before the legislature is dissolved Sept. 24. (FILE PHOTO)

Despite getting battered by Inuit organizations, MLAs and others critics, Nunavut’s education minister still thinks Bill 37, which would amend the territory’s Education Act, might possibly survive.

Nunavummiut will soon find out.

Nunavut MLAs are gearing up for their final legislative assembly meeting in Iqaluit—Sept. 12 to Sept. 19—before the legislature is dissolved in advance of the October territorial election.

“As a government, that’s something that was given to us as a goal for the government, as a mandate for this government, and certainly we do want to carry that forth before the end of the life of this government,” Quassa told Nunatsiaq News from his hometown of Igloolik, Sept. 8.

The legislature’s standing committee responsible for legislation, after considering submissions from stakeholders and members of the public behind closed doors in April and May, issued a two-page statement recommending Bill 37, “fall off the order paper when the current Assembly dissolves.”

But while MLAs on the committee cited strong opposition to Bill 37 from groups such as Nunavut Tunngavik Inc., they avoided moving to officially kill the bill during their spring sitting, and were again silent during the legislature’s brief summer sitting.

“As the minister of education, I’m really hoping that the standing committee will come forward, whether there has to be amendments or not. That’s something we’ll have to work on,” Quassa said.

“We’ll see what happens before the end of the sitting. It’ll be up to the House whether its going to be eight days or not.”

The legislative assembly’s senior clerk, John Quirke, told Nunatsiaq News, Sept. 11, that there were no plans for the standing committee on legislation to meet further on Bill 37, and no report from the committee is currently expected.

Quassa said there are six other pieces of legislation scheduled for consideration by Nunavut MLAs this fall, including three supplementary appropriation bills, and a bill authorizing the regular write-off of assets for the 2016-17 fiscal year.

Bill 55, an act amending the Nunavut Motor Vehicles Act, will also be read during the fall sitting. That bill would mandate annual reporting on the administration of the motor vehicles act and traffic safety, as well as a review of the act every five years.