Baker Lake missed out on construction of middle school and daycare 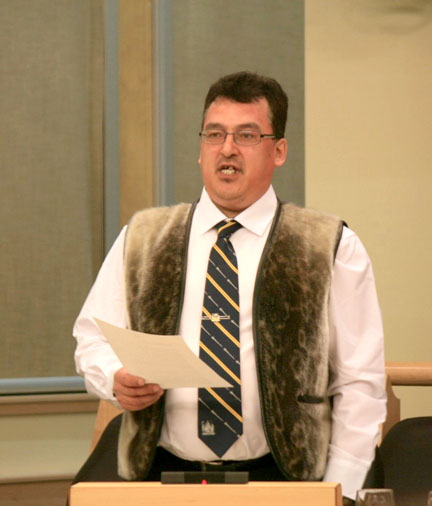 The Government of Nunavut’s policy of including daycares in the construction of new schools offered some promise to parents in Baker Lake—until plans to build a new middle school in the community folded last year.

With that, Baker Lake MLA Simeon Mikkungwak found the community’s next option from the government would be to identify a space for a daycare and establish a society to run the facility, which could then acquire funding to run the operation from the Department of Education.

“Our department is not responsible for acquiring facilities specific to daycares,” Education Minister Paul Quassa told Mikkungwak in the legislative assembly March 14.

“This initiative has to come from the community, and with the establishment of a society, then funding becomes available for the operation of daycares,” Quassa said. “I can only encourage residents of Baker Lake to identify a building for a future daycare space as well as the society status, as our department waits for applications for a future daycare.”

The GN called off plans to build a middle school in Baker Lake last year because school attendance figures were too low, Mikkungwak said.

The MLA said the lack of daycare spaces is what’s actually preventing young parents, who would normally attend Grade 10 to Grade 12, from going to school, which pulls down high school attendance figures.

“Some high school students are young parents, and right now we only have one daycare in the community, and that’s always booked solid for GN employees, or whoever was on top of the priority list,” Mikkungwak later explained to Nunatsiaq News in an interview from Baker Lake on March 16.

“So without another daycare building, or daycare spaces within Baker Lake, it really affects their attendance—due to not being able to find babysitters or not being able to secure a spot for their child at the daycare facility,” he said.

Mikkungwak pointed out to Quassa that Jonah Amitnaaq High School, completed in 2003 and the most recently constructed school in Baker Lake, actually included plans for a daycare in the original design.

The government of the time dropped plans for the daycare, he recalled.

“I would like to know why that is the case, if the minister can outline reasons for this?” the MLA asked.

Quassa replied that the construction of the high school predated the current government’s school-with-daycare construction policy.

In recent years, the government recognized the need for daycare facilities, so “new school designs or school additions includes a requirement for daycare space,” the minister said.

Mikkungwak said he is apprehensive about where this leaves Baker Lake, in terms of classroom sizes and the shortage of daycare in the community.

He estimates the community’s elementary school enrolment levels to be as high as 300. Attendance in this community of about 2,000 drops off in high school, at about Grade 10.

“And those are the critical years, I would say, if you want to excel anywhere in the world today,” he told Nunatsiaq News.

“Including a daycare in the high school would have eliminated that major problem, because attendance would have maintained stability,” he said.

Recovery operations for schools that lost classrooms due to fires in Cape Dorset and Kugaaruk may eat into the government’s budget for education, which could further delay plans to increase school and daycare capacity in Baker Lake, Mikkungwak believes.

The MLA now hopes Quassa and department of education officials will follow up on his request to meet with Baker Lake’s district education authorities “to explore available options with the private sector, if there’s any buildings available that could be identified as a daycare space,” he said.

Quassa suggested in the legislative assembly that DEAs invite department officials “to meet with them and specialists in the Early Childhood division” to discuss options.

“I guess I will find out in the next few weeks whether that will happen,” Mikkungwak said.