Nunavut MLAs approve money to be spent by next legislature 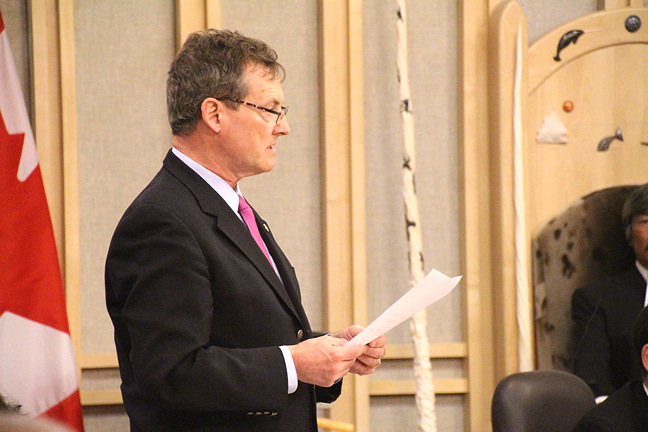 A new bill introduced by Finance Minister Keith Peterson during a June 5 committee of the whole meeting will see five large-scale projects pushed ahead into next year’s capital funding estimates, despite a coming election. (PHOTO BY BETH BROWN)

Five mammoth infrastructure projects won’t be held up by the fall election thanks to a new bill that will kick start next year’s capital budget.

While an election means regular capital estimates will have to wait for approval until the winter sitting of the newly elected legislature, the Department of Finance flagged five projects, June 5, that it says can’t wait that long without risk of late tenders and missed sealift deadlines.

“I am proposing a modified approach to the approval process for the 2018-19 capital estimates that will not delay ongoing work for major infrastructure projects for which the legislative assembly has already approved funding,” Finance Minister Keith Peterson said, while introducing Bill 46, Appropriation (Capital) Act, No. 1, 2018-2019, which covers the beginnings of capital estimates for the 2018-19 fiscal year and the Government of Nunavut’s five-year capital plan starting 2019.

It’s the first time a sitting legislature is tying the hands of the next crop of MLAs and ministers, but Peterson thinks it’s worth it.

Besides high price tags, Peterson said project complexity, timelines and federal funding were the main reasons for choosing the five.

“The Government of Canada is not going to give you one cent more and we know that from experience,” said Peterson.

A year-long delay could lead to a one or two per cent cost increase, he said, which would impact the total cost of each project.

“We’re trying to mitigate the risks,” said Peterson. “When you have these delays and higher costs, it impacts your capital plan”—which can lead to digging in pockets to reallocate funds or even to possible project deferrals—he said.

While construction tenders and 2018 sealift deadlines were risks cited for the federally funded projects and the Sanikiluaq health centre, Peterson said the Gjoa Haven tank farm was chosen because its estimated cost has already increased by $6.6 million.

He said it needs to go to tender before that figure gets higher, or before delays mean airlifting more fuel to the community.

“We didn’t want any more problems with that,” Peterson said.

The part one capital plan for the coming fiscal year would see $35,538,000 set aside for these five projects. The cost breakdown requested by the bill is:

• $100,000 for the Department of Community and Government Services for the Gjoa Haven Bulk Fuel Capacity Increase;

• $15 million for the Department of Health for the Sanikiluaq Health Centre Replacement;

• $5 million for the Department of Economic Development and Transportation’s for the Pond Inlet Marine Infrastructure;

• $10 million for the Iqaluit Marine Infrastructure; and,

• $5,438,000 for the Department of Justice for the Qikiqtani Correctional Healing project in Iqaluit.

Understanding that the appropriation bill was a pilot project, South Baffin MLA David Joanasie asked if the department could forecast whether this might become common practice.

Peterson said the department anticipates the new move to occur only during election years when on-going capital projects get interrupted by a new legislature.

On the topic of delays, MLA for Iqaluit-Niaqunnguu Pat Angnakak asked if the Iqaluit and Pond Inlet marine infrastructure projects were on schedule, to which Peterson said, “yes, but I’ll put a caveat [they are] subject to regulatory approvals.”

The bill received third reading in committee of the whole and will become law when it receives assent from the Nunavut commissioner, expected in the legislature June 8.