“Our communities must be able to trust the police” 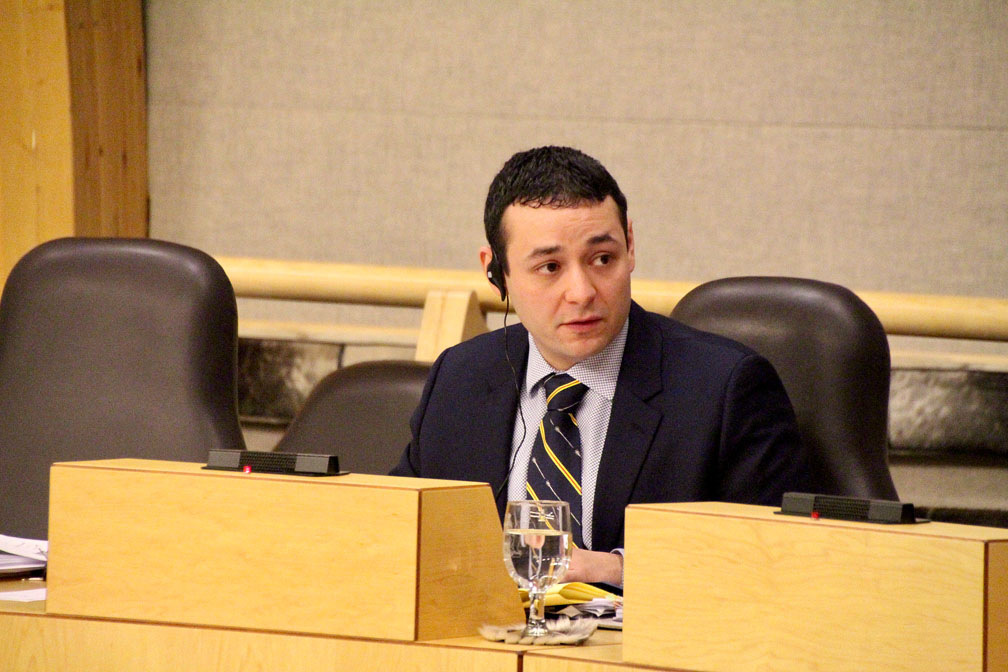 Iqaluit-Manirijak MLA Adam Lightstone at a meeting of the the standing committee on oversight of government operations and public accounts held Oct. 2. (PHOTO BY BETH BROWN)

Nunavut MLAs questioned the Legal Services Board of Nunavut this week about the growing number of excessive force complaints directed at RCMP members.

At a televised meeting of the standing committee on oversight of government operations and public accounts on Tuesday, Oct. 2, Iqaluit-Manirajak MLA Adam Lightstone read from a letter that the board had sent to the Nunavut Department of Justice in March 2015.

“We started to see a rise with regards to the number of charter applications, with regards to excessive use of force,” Jonathan Ellsworth, the chief operating officer for the legal services board, told MLAs on the committee.

The board said Nunavut legal aid lawyers are seeing an increase in complaints from clients who allege police have harmed them through the excessive use of force.

“This behaviour is not to be tolerated,” Ellsworth said. “Victims don’t get justice when police behave this way… Our communities must be able to trust the police.”

Iqaluit freelance journalist Thomas Rohner had obtained the letter—embedded at the bottom of this page—in May of 2017 through an access-to-information request, along with a reply to the Department of Justice from the commanding officer of the Nunavut RCMP.

MLAs on the standing committee have been looking this week at the 2016-17 annual report of the Legal Services Board of Nunavut.

That report said there’s an “increasing need” for legal aid services related to the use of force by police.

The board has no statistics related to police conduct prior to 2014.

The stats they did provide to MLAs are:

Sometimes clients come to legal aid showing visible signs of injury sustained during arrest and detention, the board said.

But the chair of the legal services board, Madeleine Redfern, said many clients choose not to seek a civil remedy.

The letter states this is due to a “fear of possible recrimination.”

“What exactly do they fear?” Lightstone asked.

“I think these are quite legitimate fears in some cases, because of what individuals repeatedly experience, possibly with the police,” Redfern said.

“We take the view that the clients have to choose whether or not they wish to proceed,” she said.

For the record, Lightstone asked the board to explain what police misconduct means.

“The facts vary from case to case. They have to be carefully assessed. Police are allowed to use force,” Redfern said in response.

For example, if a person were to resist arrest, they might become injured. This could, in some cases, be justified, Redfern said.

But, in cases where bones are broken, “it may be excessive use of force and police misconduct,” she said.

Staff lawyers for legal aid found cell-block footage to be highly effective in helping assess the use of force.

But those lawyers also found that such footage can be difficult to access quickly, or is not available in some cases.

In May, an RCMP officer was found not guilty of assault in relation to a Pond Inlet man who was pepper-sprayed in a detachment cell. Cellblock videos were used in that case.

In letter of response to the Government of Nunavut, Michael Jeffery, the commanding office of the RCMP “V” division in Nunavut, said RCMP data does not show an increase in use-of-force complaints.

And, “since 2013, none of the allegations relating to excessive use of force have been deemed to be founded,” Jeffery said in 2015.

“The generality of the allegations made by the legal services board makes it difficult to identify concerns that have not been brought to our attention,” Jeffrey wrote.

Because of client privacy, the legal services board did not provide names or details of the allegations to the RCMP.

In Nunavut an inquest is mandatory when a person dies in government care or police custody.

One such inquest was held in Baker Lake last summer when a man, who was believed to have suffered a stroke, died in police custody.

Earlier this month, a 22-year-old man died after police responded to a call in Kugluktuk.

Nunavut’s coroner’s office announced Oct. 1 that an inquest will take place in Pond Inlet this November following the death of a man by gunshot wound in March 2017. RCMP were on scene when the man died.

Redfern told MLAs that there is no process that requires an organization to follow recommendations that flow from coroner’s inquests.

LSBN Letter to Nunavut Minister of Justice by NunatsiaqNews on Scribd